The F-14 Tomcat is the main defender of the U.S. fleet. With its high speed and ultra-long- range weapons, the F-14 can operate hundreds of miles away from its carrier base. The Tomcat AWG-9 radar can engage six targets at once and its Phoenix missiles can kill hostile bombers 90 miles away, before they can launch their attacks. The Tomcat is one of the world's true "Top Guns!" 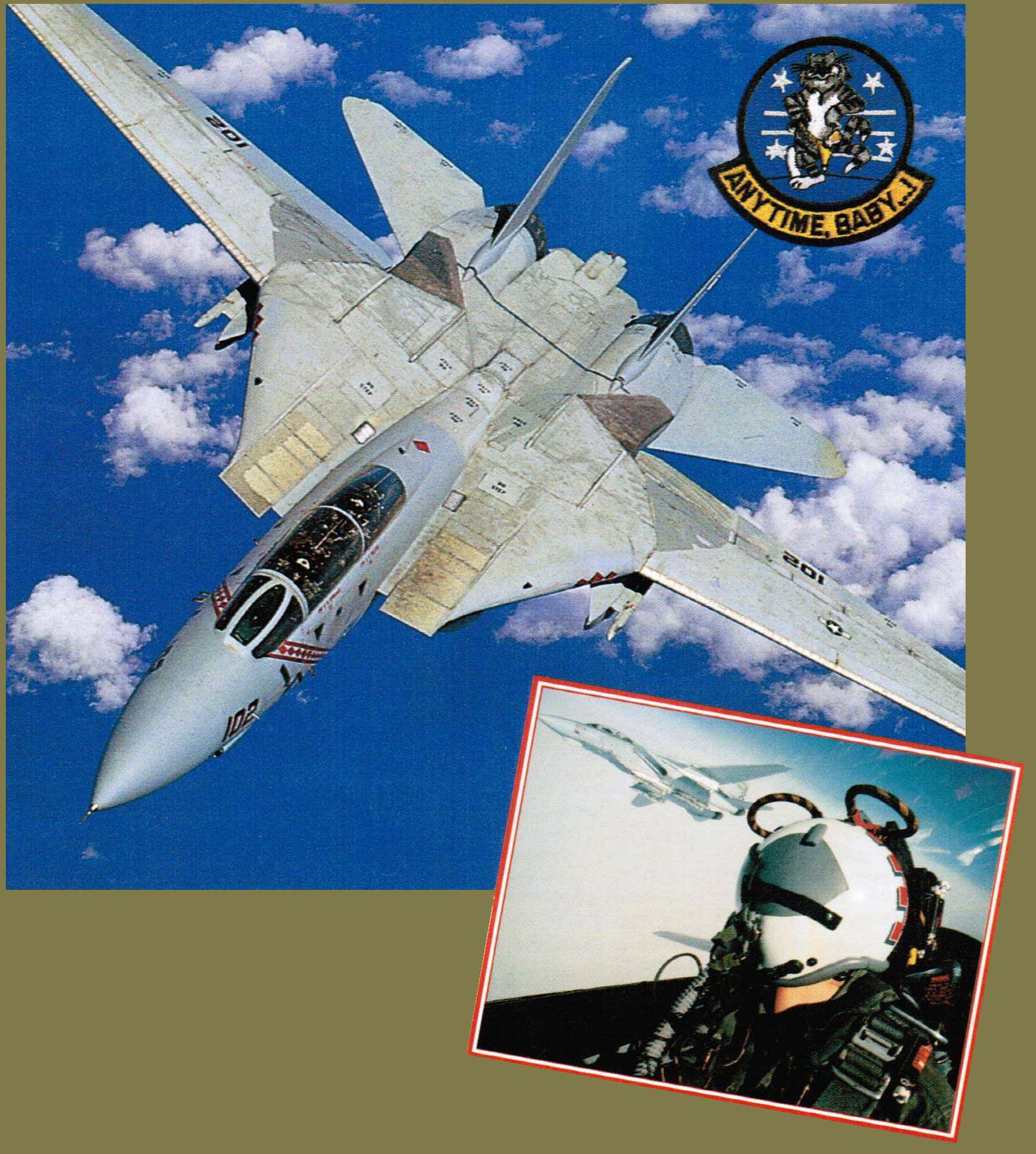 Tomcat aircrew are an elite within an elite. Pilot and backseat Naval Flight Officer act as a carefully coordinated team to wring the best from the awesome combination of performance, sophistication and firepower at their command.

Defender of the fleet

The Tomcat has been one of the great superfighters of the world since its first squadron took to the skies in 1972. It packs a massive punch, performs superbly and is the warplane of choice for many aspiring military pilots. Nothing is more likely to worry an enemy than to know Tomcats are on his track.

And yet this tremendous fighting machine can operate from a 350-foot strip of aircraft carrier deck, in all weather and around the clock.

Working with K-2C Hawkeye radar planes and using air-to-air refueling, a squadron of Tomcats can sanitize the airspace 400 miles out from the carrier battle group. This ensures that no hostile aircraft will threaten the warships below.

Even sea-skimming missiles can be killed by Tomcats using their Phoenix and AMKAAM missiles.

The fact is that Tomcats and their aircrews have to be good - they are protecting a 10-warship, $15-billion battle group manned by 10,000 sailors projecting as much firepower as the United Kingdom's entire armed forces. 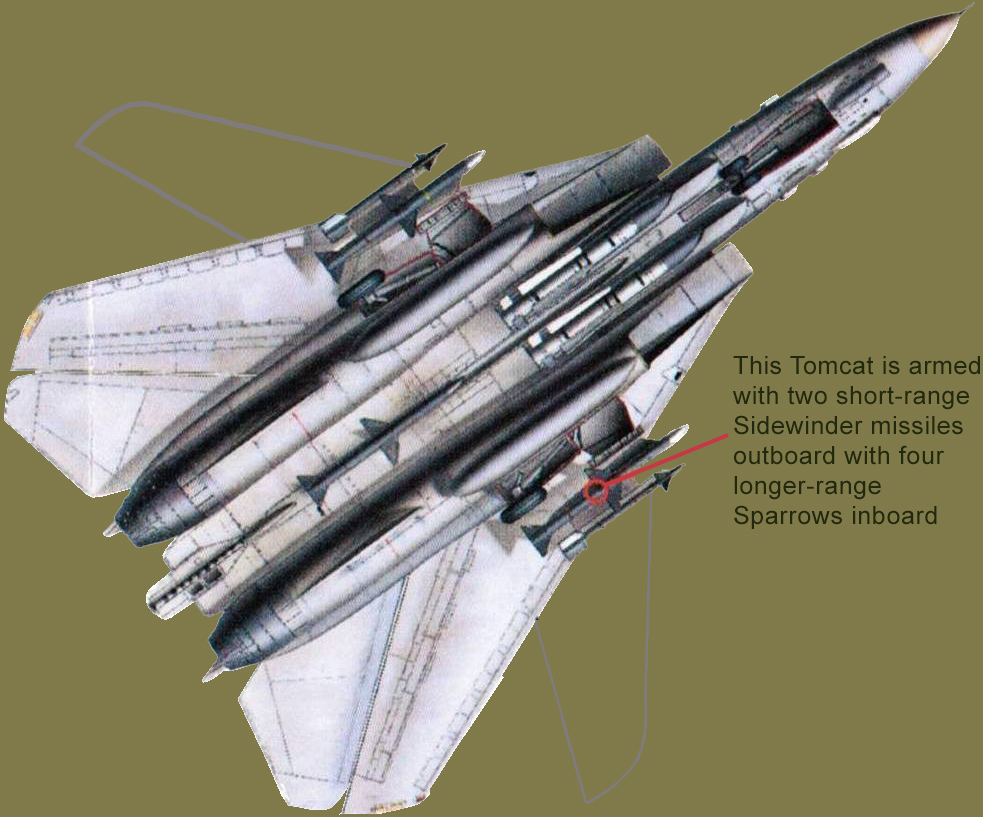 An F-14A Tomcat of VF-143, an Atlantic Fleet fighter squadron nicknamed the "Pukin' Dogs." This world famous unit fought in Korea, Vietnam and the Gulf War, and has flown the Tomcat for 20 years.

Weapons of the Tomcat

AIM-9 SIDEWINDER: The highly agile Sidewinder is used against maneuvering targets. It homes on heat - for example, from the enemy's jetpipes. Range 5 miles.

AIM-7 SPARROW: The Sparrow homes on radar energy reflected from the target, which must be illuminated by the F-14's radar for the whole of its flight. Range 28 miles.

AIM-54 PHOENIX: Weighing in at almost 1,000 lb., costing $2 million and with a range in excess of 90 miles, the AIM-54 is the world's biggest, most costly and longest-range air-to-air missile. Tomcat can launch six AIM-54s simultaneously against separate targets. The missile's onboard radar fits the F-14 turn away after launch. Range 90 miles.

BOMBCAT: The Tomcat can carry a range of dumb (unguided) bombs for use against ground targets. Tomcat squadrons began training in the bombing role in 1991. 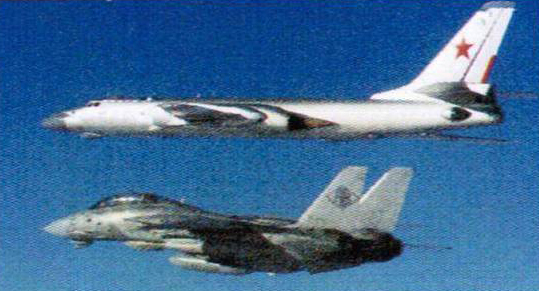 The main threat to U.S. Navy carriers is posed by long-range bombers armed with sea- skimming missiles. Only Tomcat can intercept the bombers before they get within lethal range. 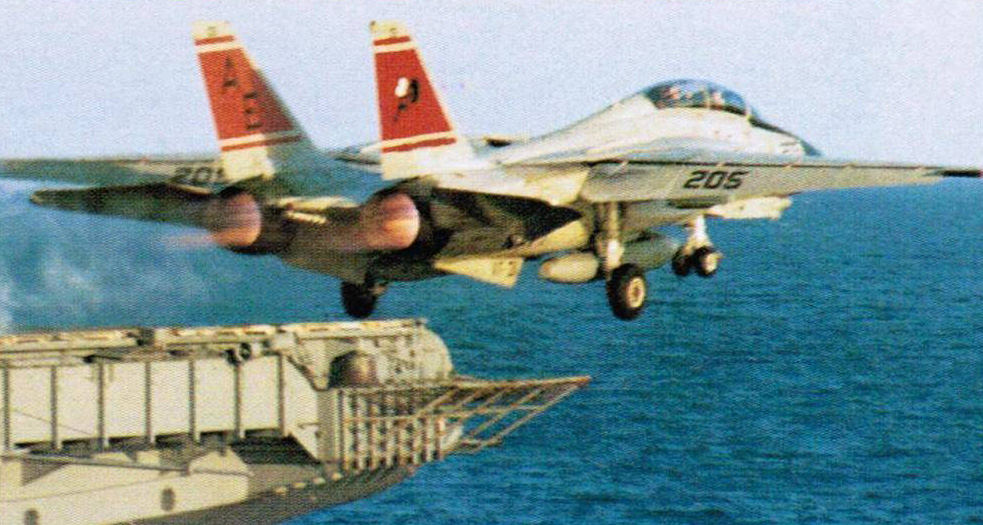 The F-14's high-thrust TF-30 turbofans and swing wing allow it to operate from short carrier decks. Takeoffs are made using a powerful steam catapult. 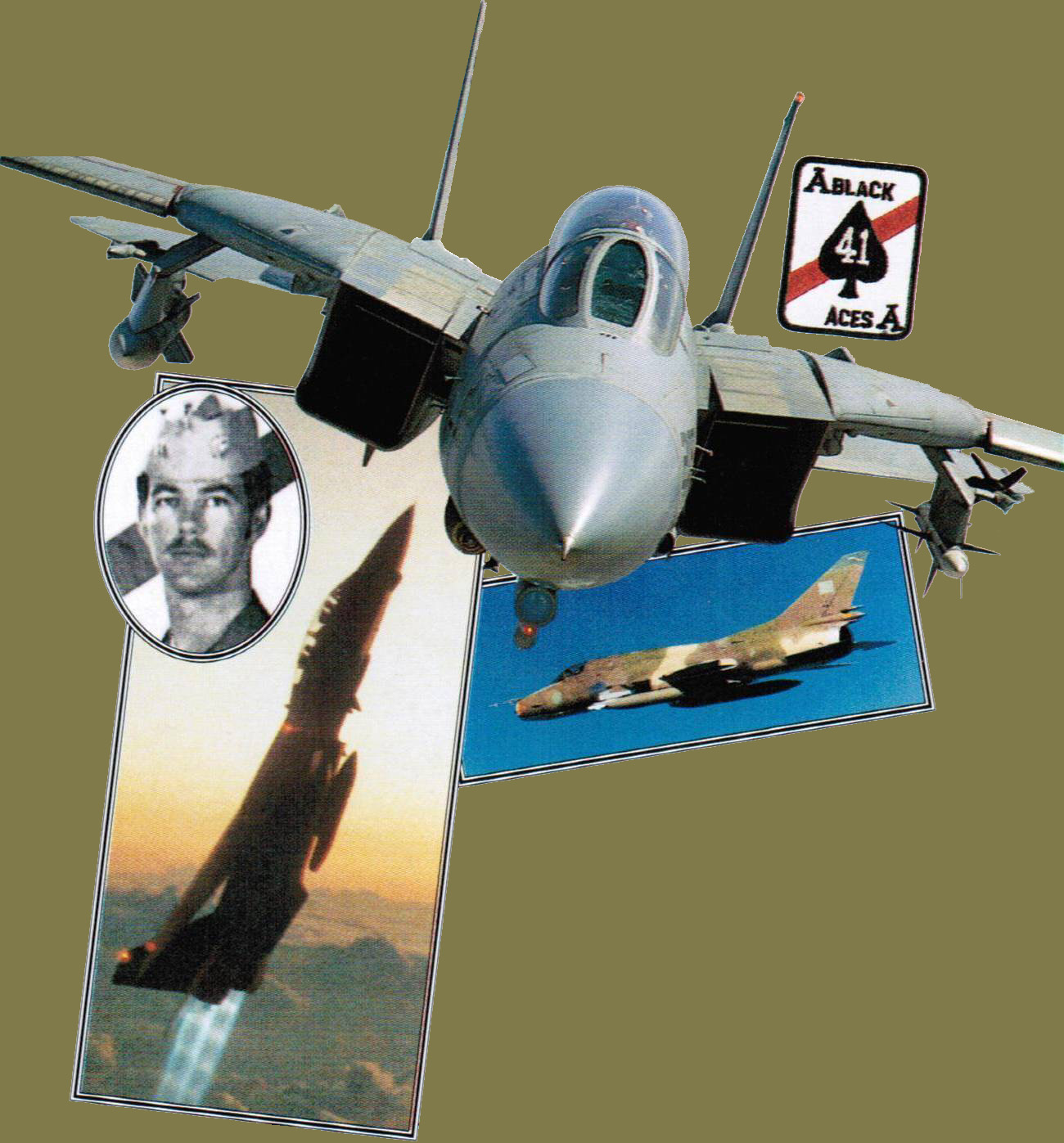 The F-14 has Mach 2+ performance, a sparkling rate of climb, good maneuverability - all the hallmarks of a great fighter. 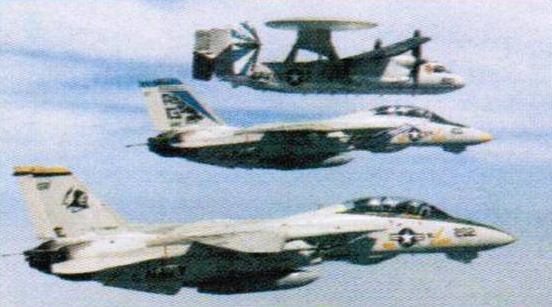 As well as its own radar, the F-14 operates with an E-2 Hawkeye, a flying radar station with a huge rotating antenna above the fuselage.

▶ The Tomcat's AWG-9 radar can detect, track and engage targets at ranges of more than 100 miles.

▶ One Tomcat can engage the same number of targets as three F/A-18 Hornets.

▶ The AIM-54C Phoenix is the world's longest-range air-to-air missile.

▶ Forming the outer edge of a battle group's defenses, the Tomcat can engage enemy bombers and missiles more than 500 miles out from its home carrier.

The F-16 Fighting Falcon is over 20 years old but still a star performer. Fast and potent, it remains one of the best fighters in its class. This relatively lightweight and inexpensive warplane gave us electronic flight controls and other high-tech wizardry. In addition, its radar, missiles and cannon make it a genuine Top Gun, respected by friend and foe alike. 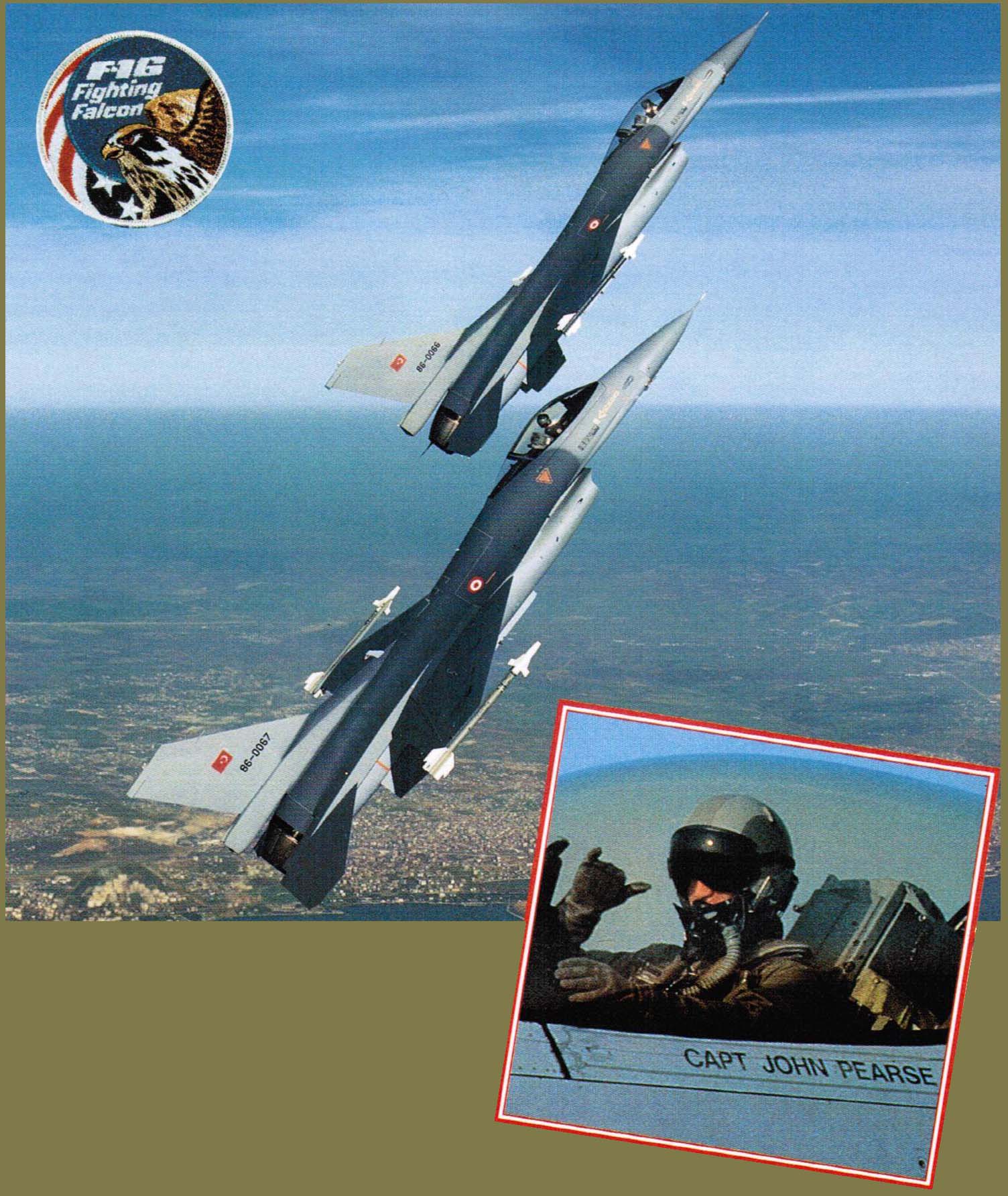 The F-16 pilot has at his command the West's premier light- fighter. The view from the cockpit is outstanding, thanks to the massive one-piece bubble canopy.

The F-16 is proof that one aircraft can push back the boundaries of aviation. This marvelous warplane introduced features such as lightweight computers, "fly-by-wire" electronic controls and an arsenal of high-tech weapons.

No longer new, the F-16 is still a boon to those who fly it. Pilots say the F-16 is a super ship, without equal from the viewpoint of the airman at the controls.

Engineers intended the F-16 as a no-frills "hot rod." It gained weight with the addition of improved radar and weaponry, but the F-16 is still smaller and more nimble than many fighters. Used mainly to drop bombs, the Fighting Falcon can turn and fight with unbridled fury when provoked. It also was one of the first operational fly-by-wire aircraft - its controls being electronically operated and computer controlled. The pilot sits in a seat that reclines at a 30-degree angle to withstand high-g maneuvers. In this position, he maintains a higher fighting ability than his enemy. 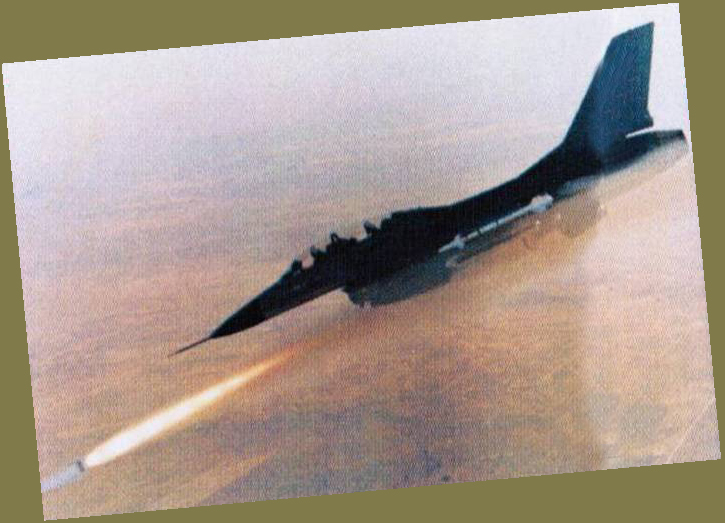 Despite its amazing agility, the F-16 is steady as a rock when it needs to be - diving in to attack a target with gun or missiles. Here a two-seater lets fly with a Maverick missile, a favorite against tanks. 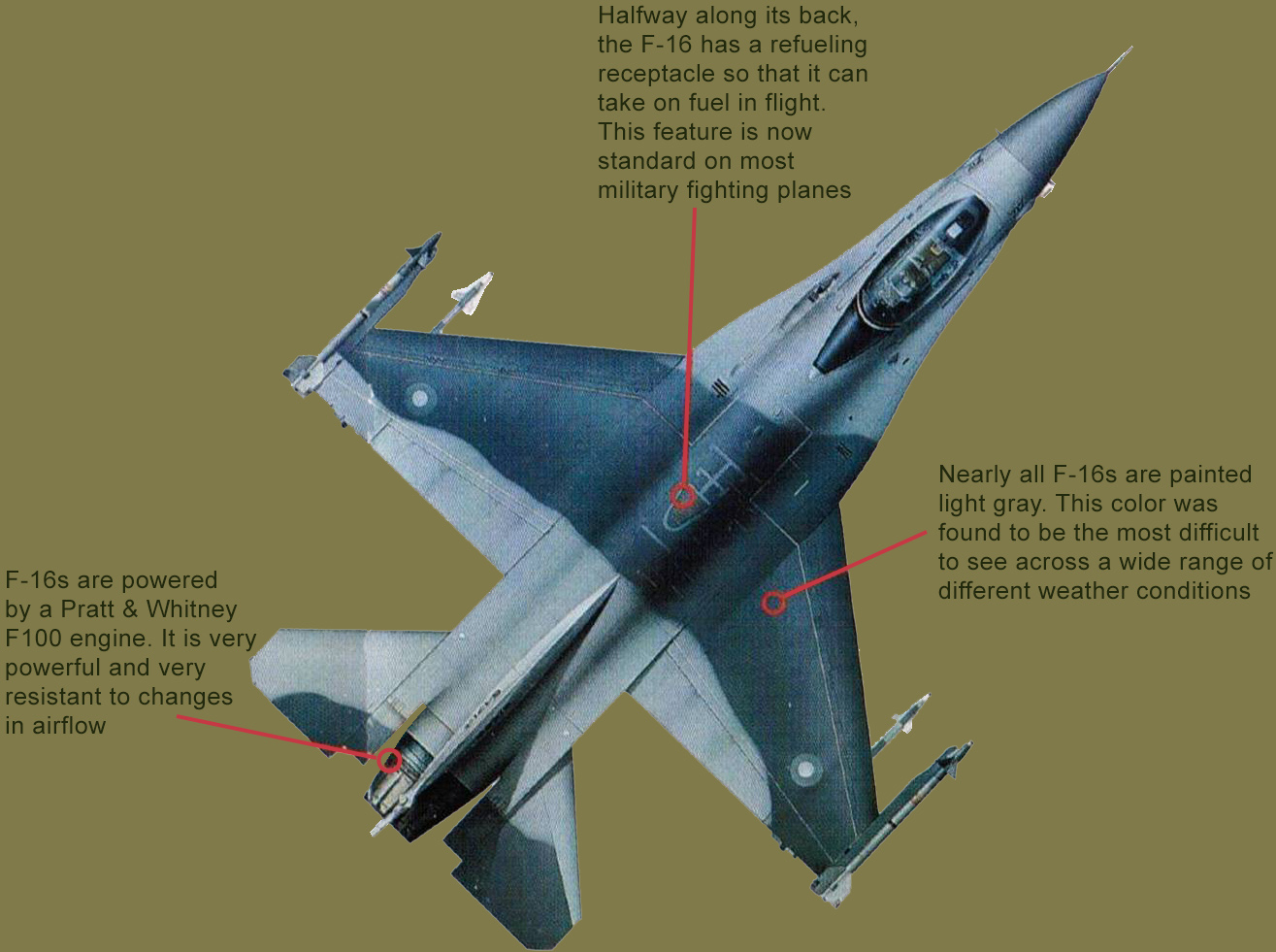 In service with many nations, the F-16 can rightly be regarded as the world's standard fighter. This F-16 is one of Pakistan's aircraft, used to shoot down several types of Russian planes along the border with Afghanistan. 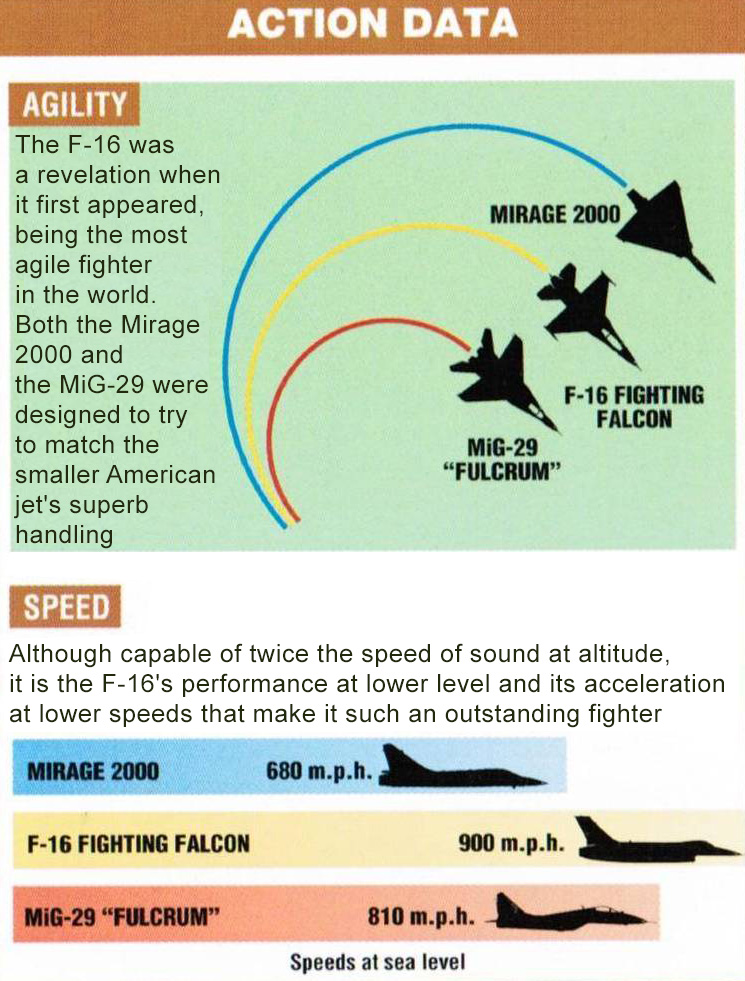 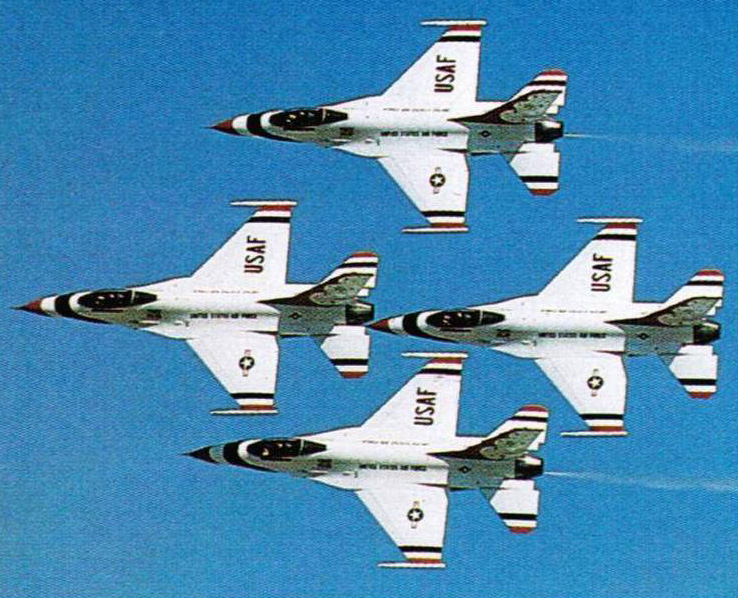 Perhaps the best known F-16s are those of the U.S. Air Force's Thunderbirds team. The F-16 gives them excellent agility matched with exceptional speed. 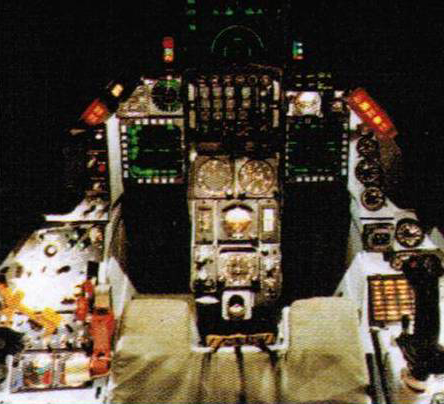 The F-16 pilot reclines at 30 degrees and flies the fighter using a pressure-sensitive side-stick with his right hand. 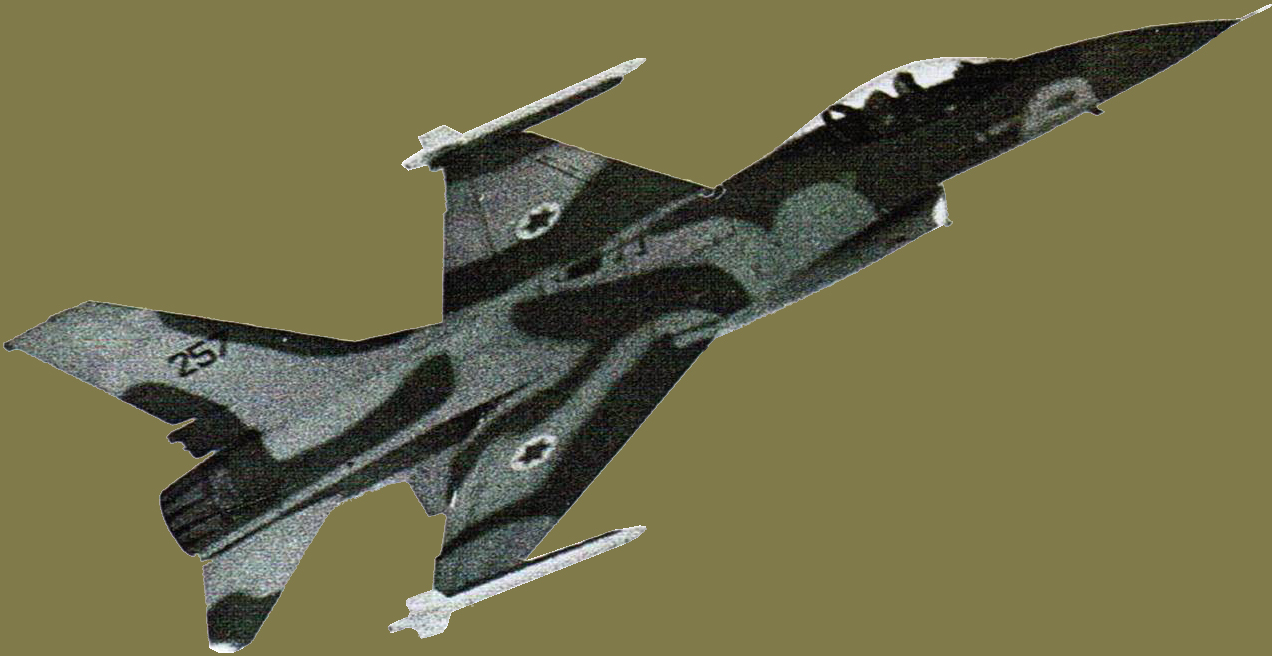 Israel has been using the Fighting Falcon since the early 1980s. The aircraft's combat debut came with the destruction of Iraq's Osirak nuclear facility in 1981. Over Lebanon in 1982, Israeli F-16s shot down 44 Syrian M/Gs without loss. 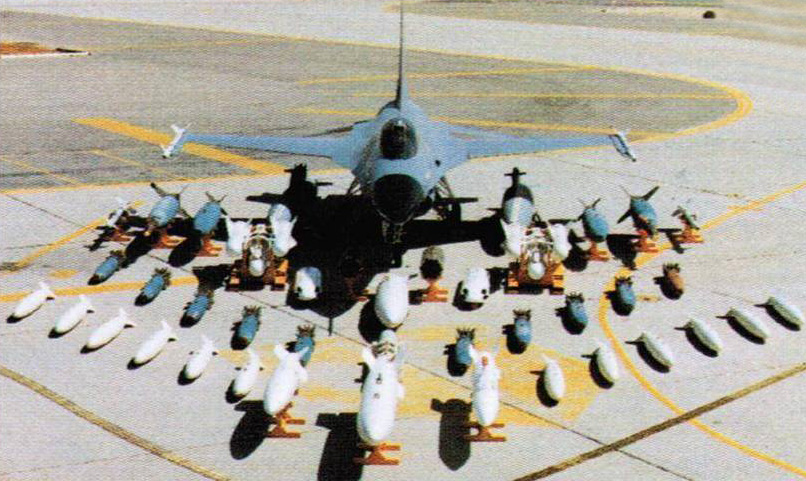 Originally conceived as a lightweight fighter, the F-16 emerged as a warplane capable of lifting just about every ground attack store available. 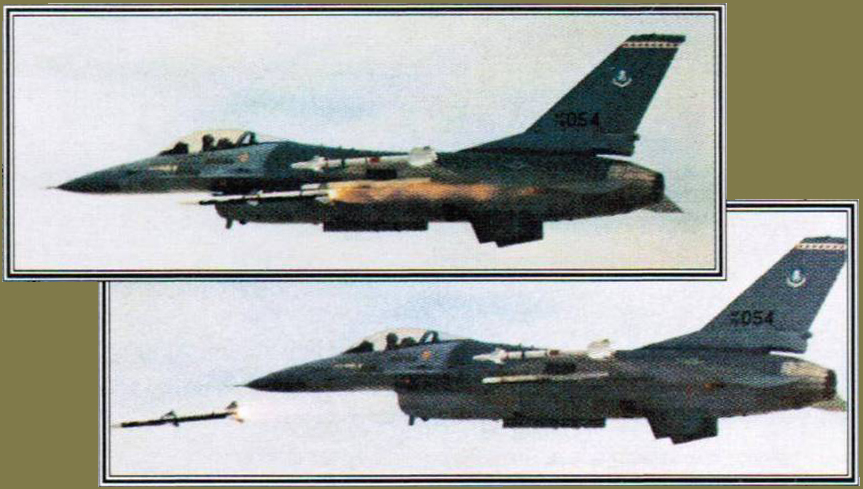 Falcons can launch the latest AMRAAM air-to-air missile. Using this weapon, a U.S. Air Force F-16 shot down a MiG-25 over Iraq.

▶ The F-16 ejection seat works safely at any speed and altitude.

▶ A delta-winged test version, the F-16XL, has wing area increased by 120 percent.