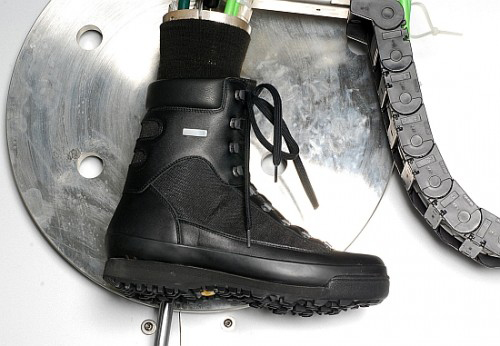 The consideration of the army footwear of Switzerland would not be complete without the review of military socks, because convenient and high-quality socks are not less important than the good quality boots. That's why the experts from the "Armasuisse" and "EMPA" has developed new advanced socks for the Swiss Armed Forces and performed the tests of them. This was done along with the works on the new Swiss Army boots prototypes, in the framework of the joint project "Neue Fussbekleidung" ("New boots"). The most important features of those new generation Swiss army socks were much improved moisture-wicking properties and reduced likelihood of the feet rubbing and blistering. In order to achieve this the developers have performed a series of experiments with different fabrics and synthetic fibers of various structures.

Brief information about the developers.

"Armasuisse" is a federal agency of the Swiss Confederation, affiliated with the Federal Department of Defence, Civil Protection and Sports, which is responsible for military logistic and the supply of arms. The S & T (Science and Technology) Division, which is based in the cities of Bern, Thun and Emmen was taking active part in the development of new army socks. In other words, "Armasuisse" is the competent authority responsible for the procurement of technologically complex systems and materials for the needs of the Swiss Armed Forces. 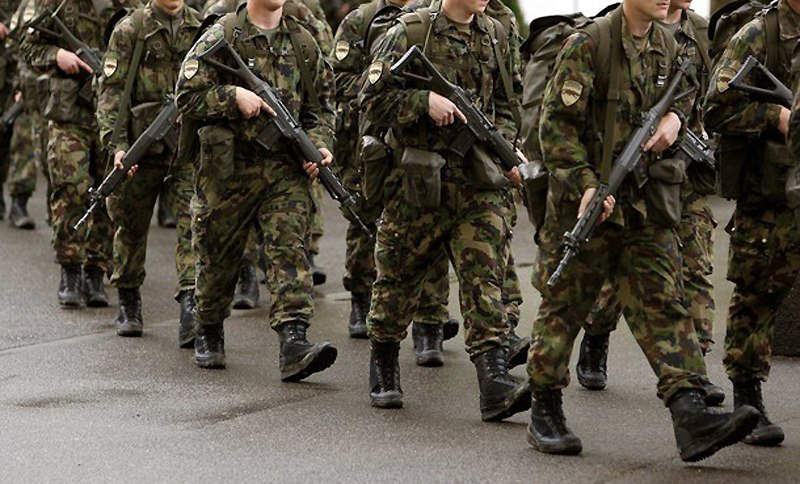 "EMPA" (an abbreviation of the German "Eidgenössische Materialprüfungs- und Forschungsanstalt") is the Swiss Federal Research Institute, located in Dübendorf. This is the second largest competent body after the famous PSI (Paul Scherrer Institute), which is engaged in applied research and testing of materials.

"EMPA" is a part of the Swiss Institutes of Technology Domain, and its work focuses on the development of solutions and the creation of new materials for industry and the public. The sphere of its responsibility includes five areas: "nanostructured materials", "structurally stable materials", "materials for health and performance," "natural resources and contaminants" and "materials for energy technology".

The main developers of the research project (EMPA and Armasuisse) already had successful experience of cooperation. In 2002, within the framework of the "Sweat Management" research project and together with "Eschler" (textile manufacturer) they developed and implemented the multi-weather four-level clothes concept ("Vierschichtiges Bekleidungskonzept") for the Swiss Armed Forces. This kit, which provides optimal thermal regulation and protection of soldiers from cold, wind and weather, is used by the Swiss the military since 2005.

Traditionally, the recruits of all armies of the world are frightened most of all by painful blisters and bloody chafed places on their feet. These problems are the inevitable results of long foot marches, no matter how good in quality were the army boots. The traditional solutions to this problem were such conventional methods as sticker patches on the places of possible blisters, using of thin woolen socks in combination with thicker cotton or wool socks, etc... 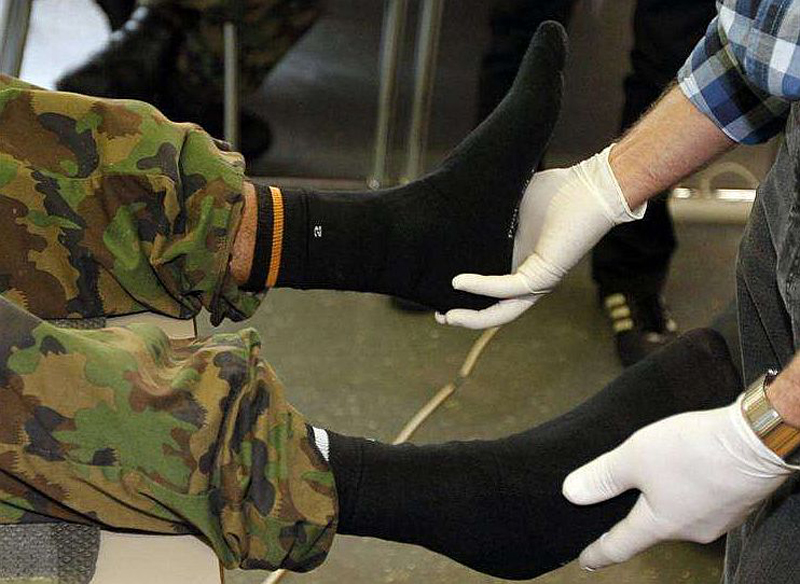 Such traditional natural materials as wool and cotton are expected to be replaced by new high-tech fabrics, made from the fibers developed by the "Empa" textile laboratory. In such a way the laboratory of "Schutz und Physiologie" ("Protection and Physiology") department, together with "Armasuisse" and "Rohner" manufacturing company, have elaborated new advanced military socks, the most important properties of which are the ability to drain the sweat quickly from the soldier's feet and to accumulate it in the fibers tissue. This feature allows to prevent rubbing the skin, reduce the friction in the toe and heel areas, and provide more comfortable microclimate inside the soldier's boots.

By selecting the most suitable materials, the researchers have tried a variety of textiles and blends, conducting the tests of the obtained prototypes, and this process took quite a long time. As a result, a special fiber (speziellen Fasermaterial) was chosen for the reinforced sections of the socks (i.e. the heels and toes, the main trouble spots of the foot), while the rest of the garment is to be made of blended woolen mixture (Wollmischung), good enough to take up and store sweat particularly well.

Further on, the novel socks, developed in the laboratory, were tested for their wearing properties during the field trials. The previously developed groundworks of "EMPA" and "Armasuisse" in the field of thermodynamics, physiology and tribology (a field of science dedicated to the study of friction) appeared to be very useful. Not only were the innovative "Anti-Blasen-Socken" ("anti-blister socks") tested on a sweating dummy foot, but scientists also involved Swiss soldiers in battle dress marching on a treadmill in the climate chamber.

In order to learn as much as possible about how the textile materials behaved during the process of walking, the involved researchers from from the Technical University of Chemnitz analyzed the biomechanical properties of the Swiss combat boots. Actually, in the ideal case the boots exert the necessary pressure on the socks to allow optimal absorption of the feet perspiration by the textile fibers. 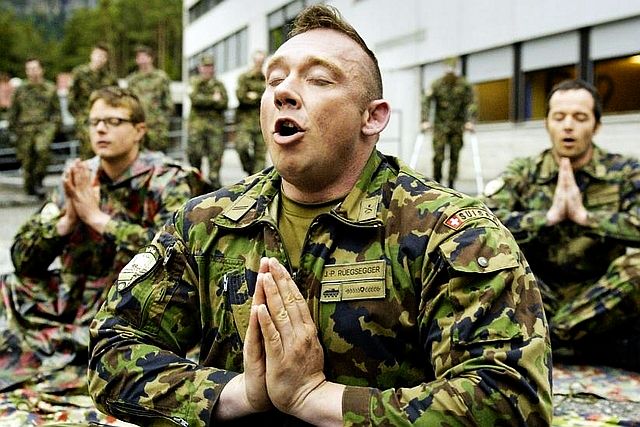 In such a way, boot and sock re create an optimal "sock-and-boot system" ("Socken- und Stiefel-System") to transport perspiration out of the feet, because the wetter the feet inside the boots, the higher the probability of blisters appearing.

At the beginning of May, 2010 sixty young Swiss soldiers, based in the Aarau canton barracks took part in the field tests, aimed at checking if the innovative socks would really prevent the feet from developing blisters under real field conditions, i.e during "sock blind-tests". Together with new military boots the recruits were given 10 single socks, which they were ordered to wear over the next five days exactly according to a given schedule, including daily 6-kilometer route marches. The aforementioned ten single socks were of three different types, and with the intention of obtaining the most objective comparison results possible the soldiers were had no information about the individual sock types and their peculiar features.

The soldiers wore different types of socks on each foot in order to evaluate different qualities of the socks and footwear, and so that the scientists could document this information. Every day after the daily 6 kilometer route march the physiologists checked the soldiers’ feet to see how wet the skin was, if it was irritated and if blisters were already appearing. At the same time the recruits described their opinions how the socks felt. 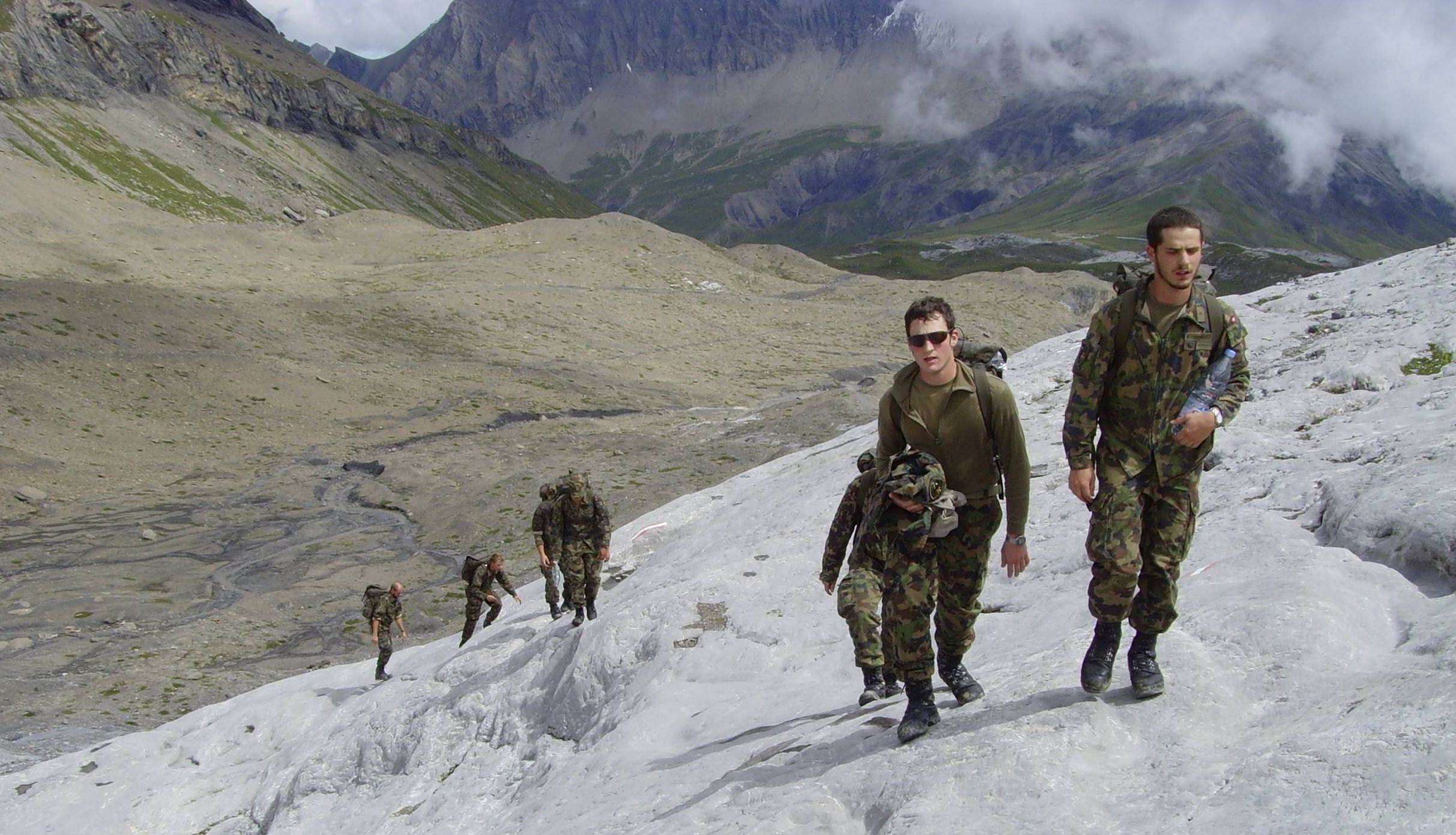 Everybody knows that Switzerland is a country of mountains. So the military footwear of such country must be applicable for highland’s conditions of service and comprise the most characteristic features of the mountaineering boots. 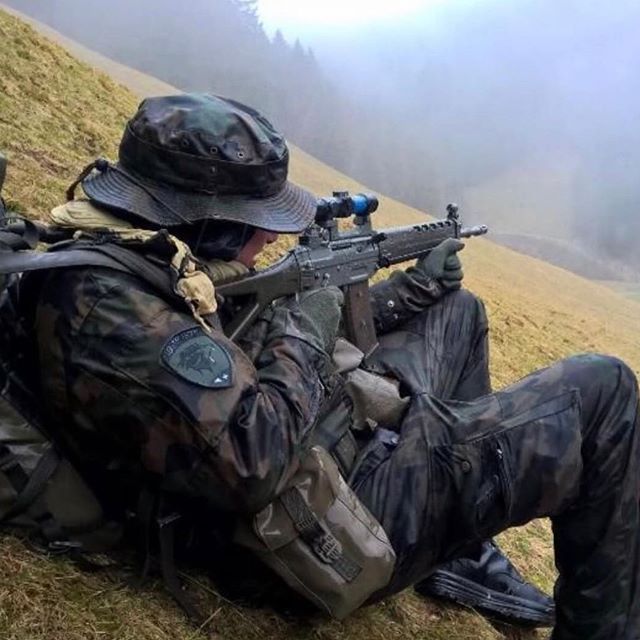 From the very beginning, the Swiss Kampfstiefel 90 were designed for heavy use in challenging terrain, providing the comfort and feet safety on the level of high-end mountaineering and ski boots. 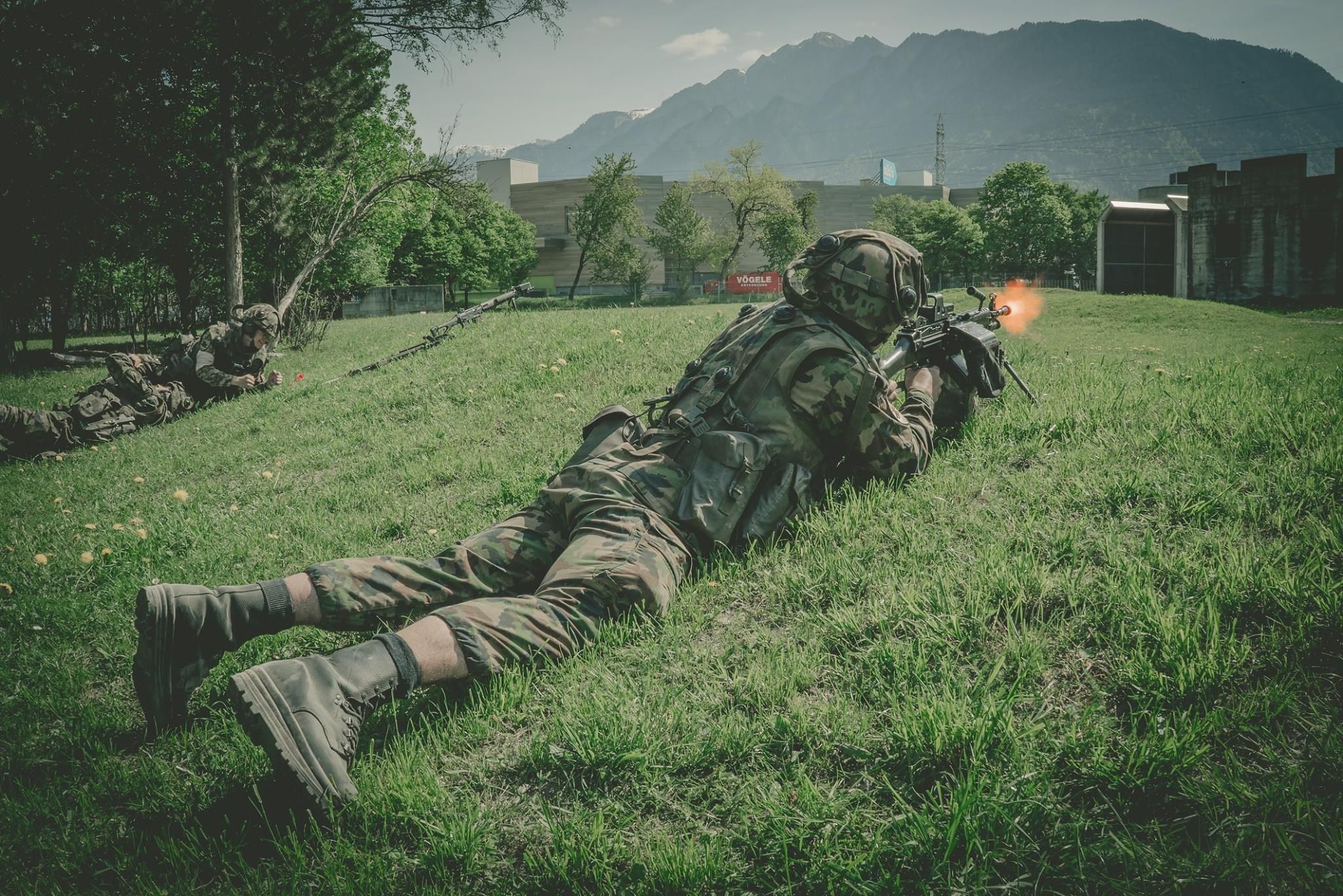 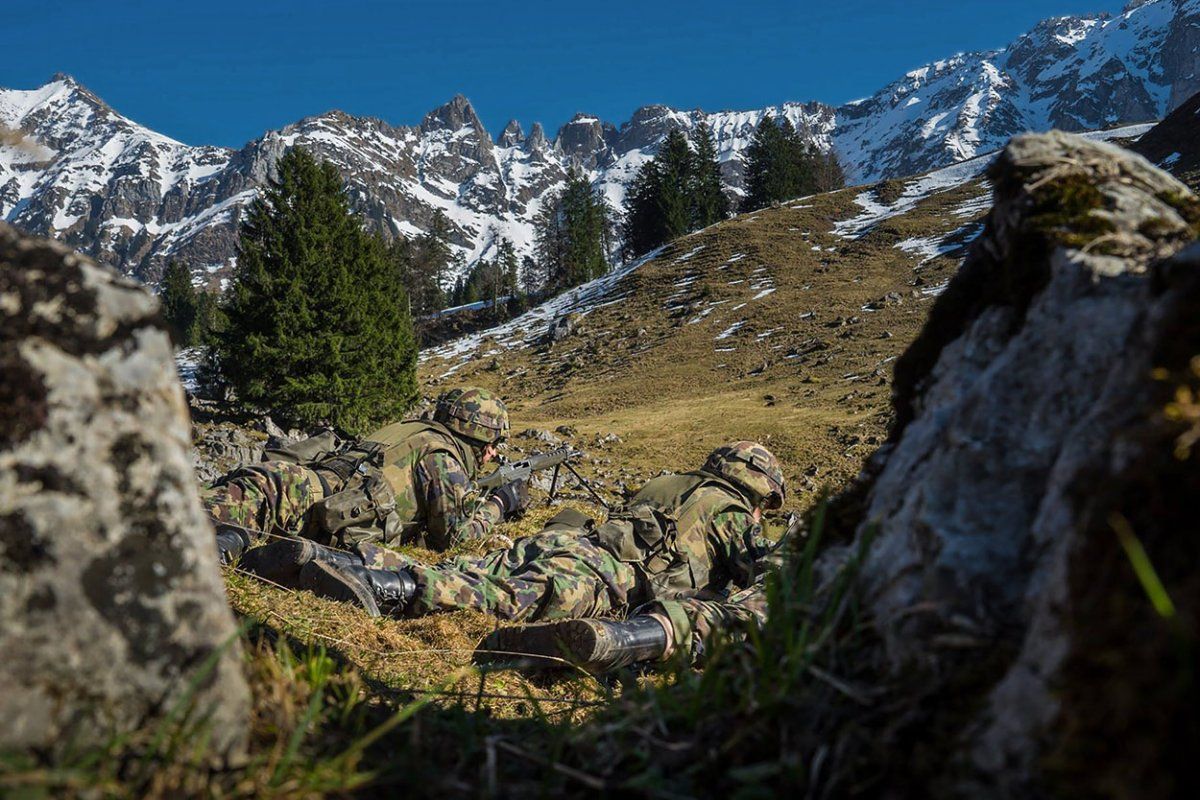 The designers of KS90 paid special attention to ankle support provision and protecting of the potentially vulnerable parts of the wearer's foot. 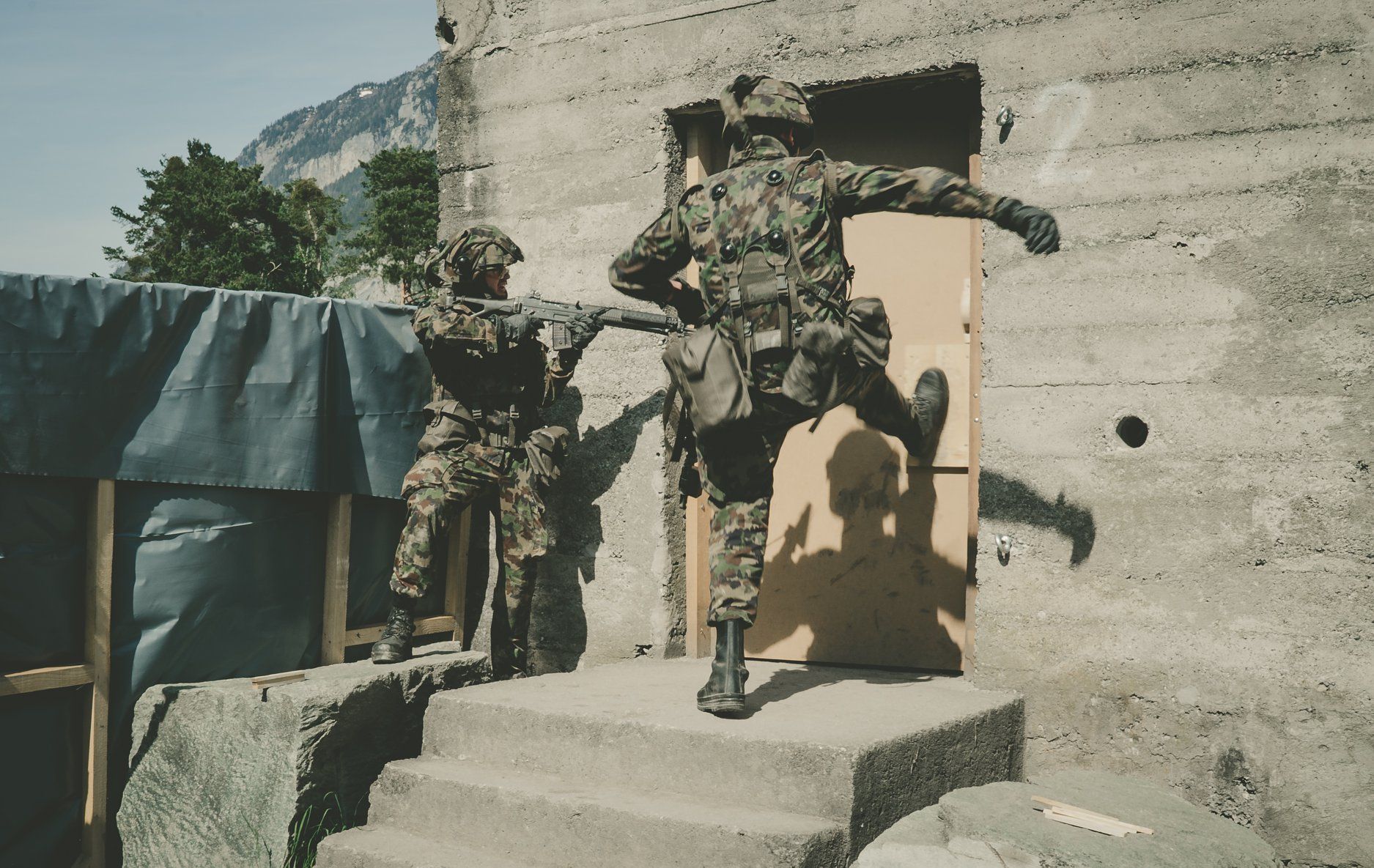 At the moment one can find out that basically there are two types of KS90 boots on the market, depending on the out-sole peculiarities, and the year of production as well. It is possible to say that there are two generations of these boots.

A wide variety of the famous European contractors from Switzerland, Germany, Italy, Austria and France provided the boots and / or the soles for the Swiss military, trading off different contracts.

After the termination of those contracts, it was "Minerva" which prolonged the contract until the year 2017, appearing to be the single company to produce the Generation I KS90 boots, though having slightly updating its tools and manufacturing lines.

First introduced in the beginning of the year 1990, the Kampfstiefel 90 has been serving for years, and the process of these boots phasing out by the Swiss military began in 2017. Both generations of KS90 are still in service: most Generation I boots on the warehouses were produced in the period from the late 2000s to the early 2010s, while Generation II boots are made during the last five years.

The peculiarity of the Generation I KS90 boots was the construction of its thick, hybrid-type sole, which consists of several rubber (rather thermoplastic elastomer) layers stacked together, tacked to the welt, and protected with a thick rubber belt from the outer side. 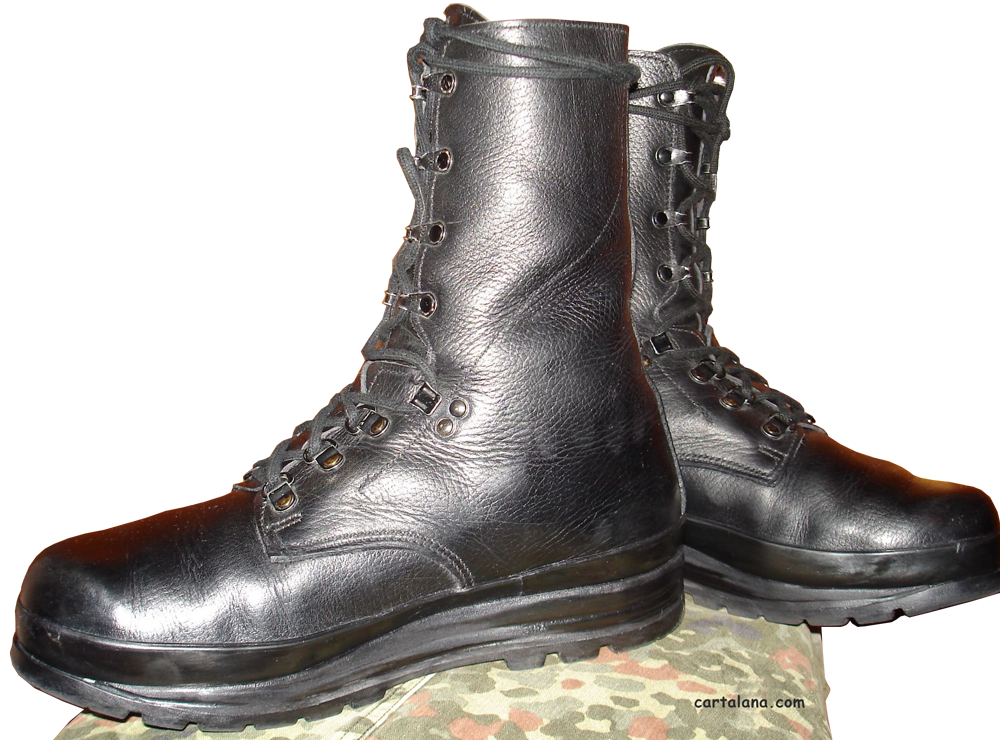 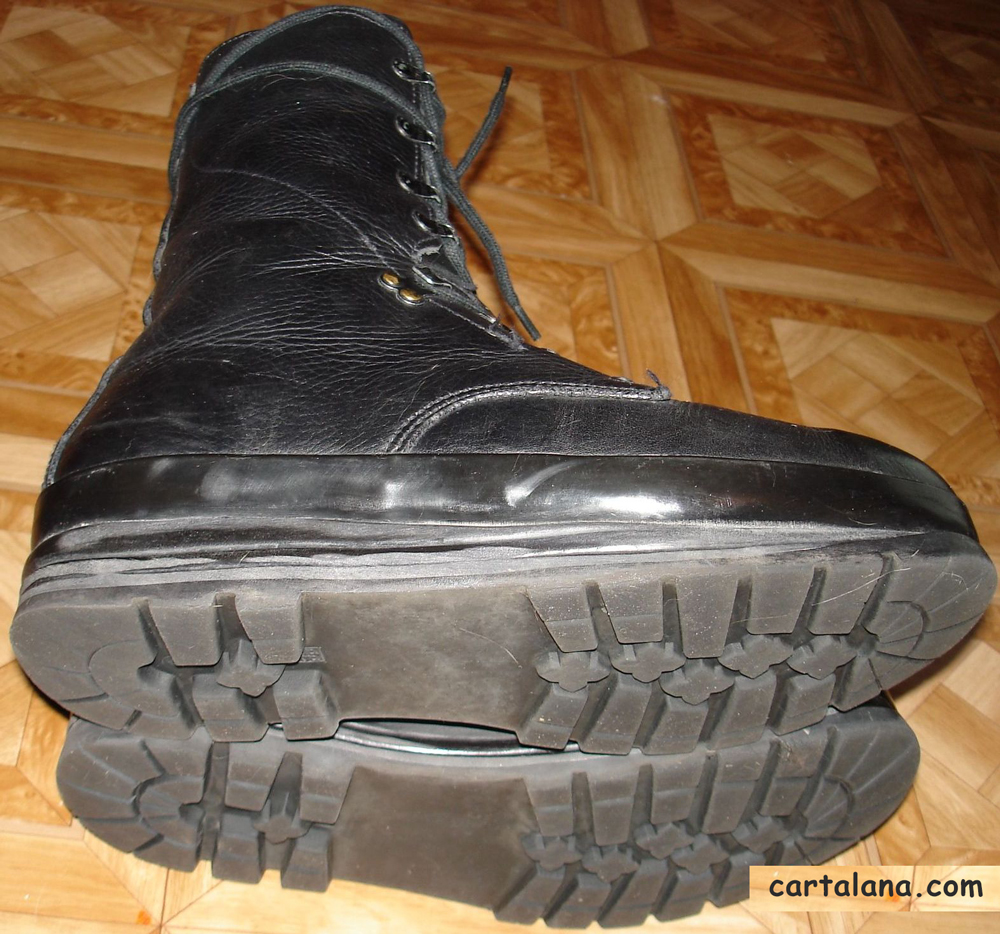 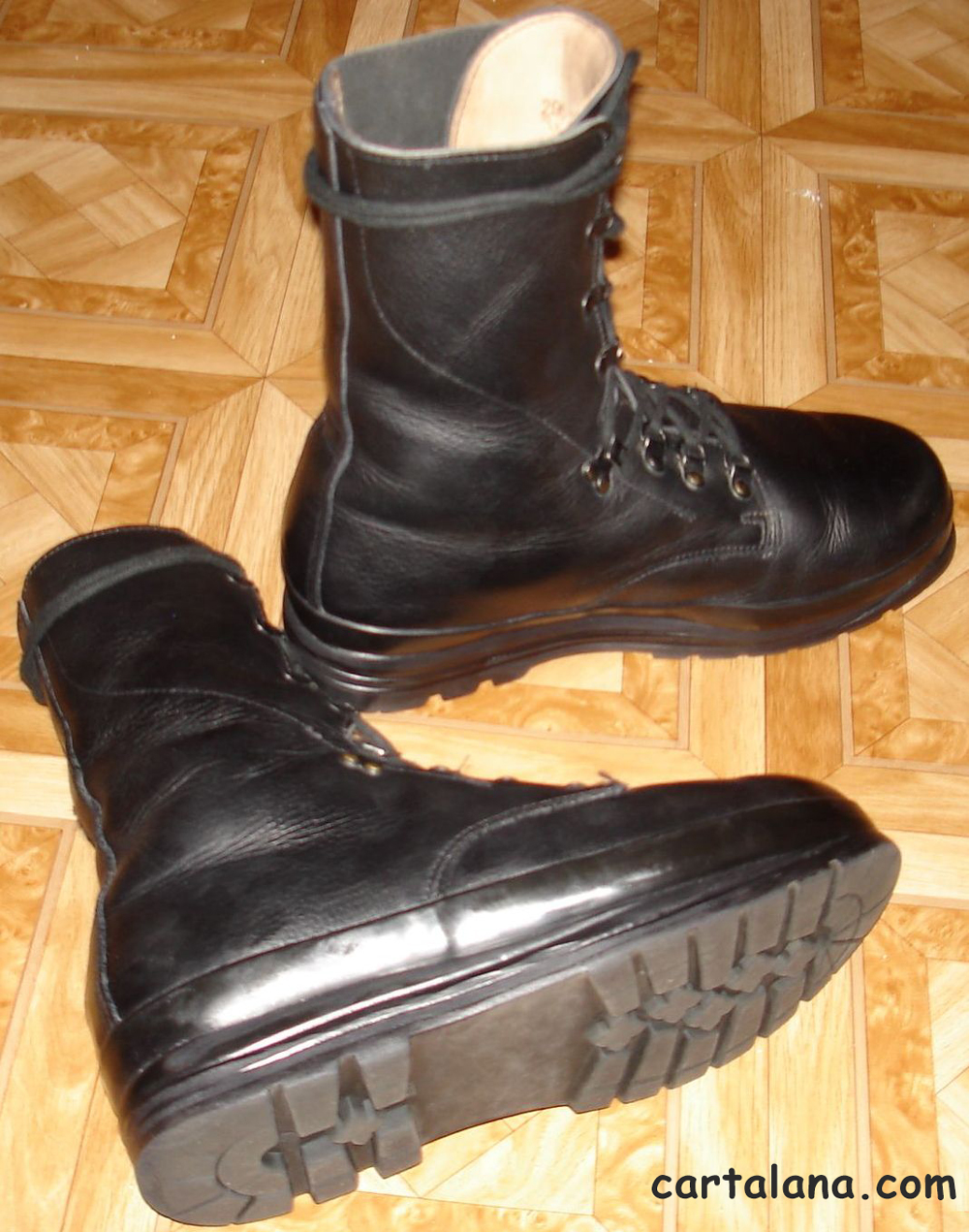 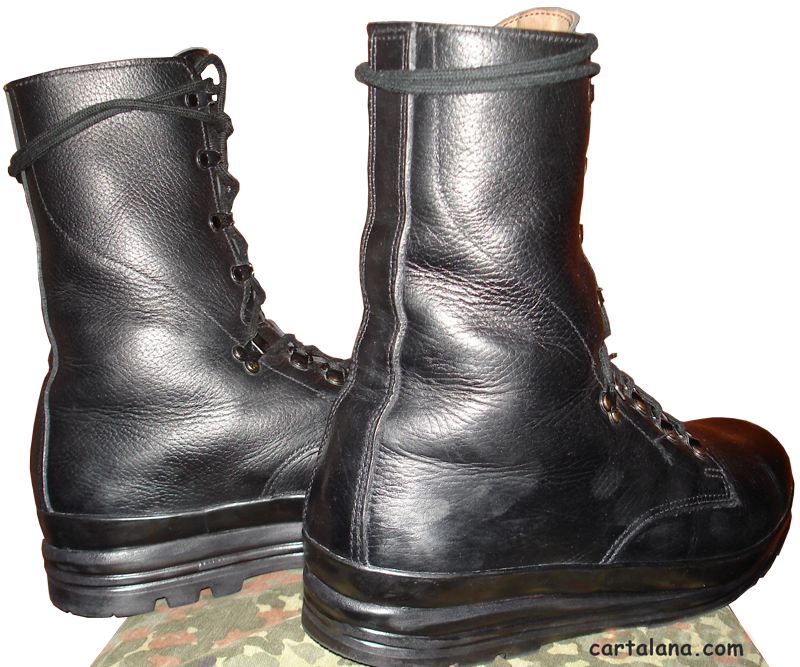 The outsole features a Vibram-licensed outer tread (with a variant of classic tread pattern, developed back in 1937 by the famous designer Vitale Bramani), 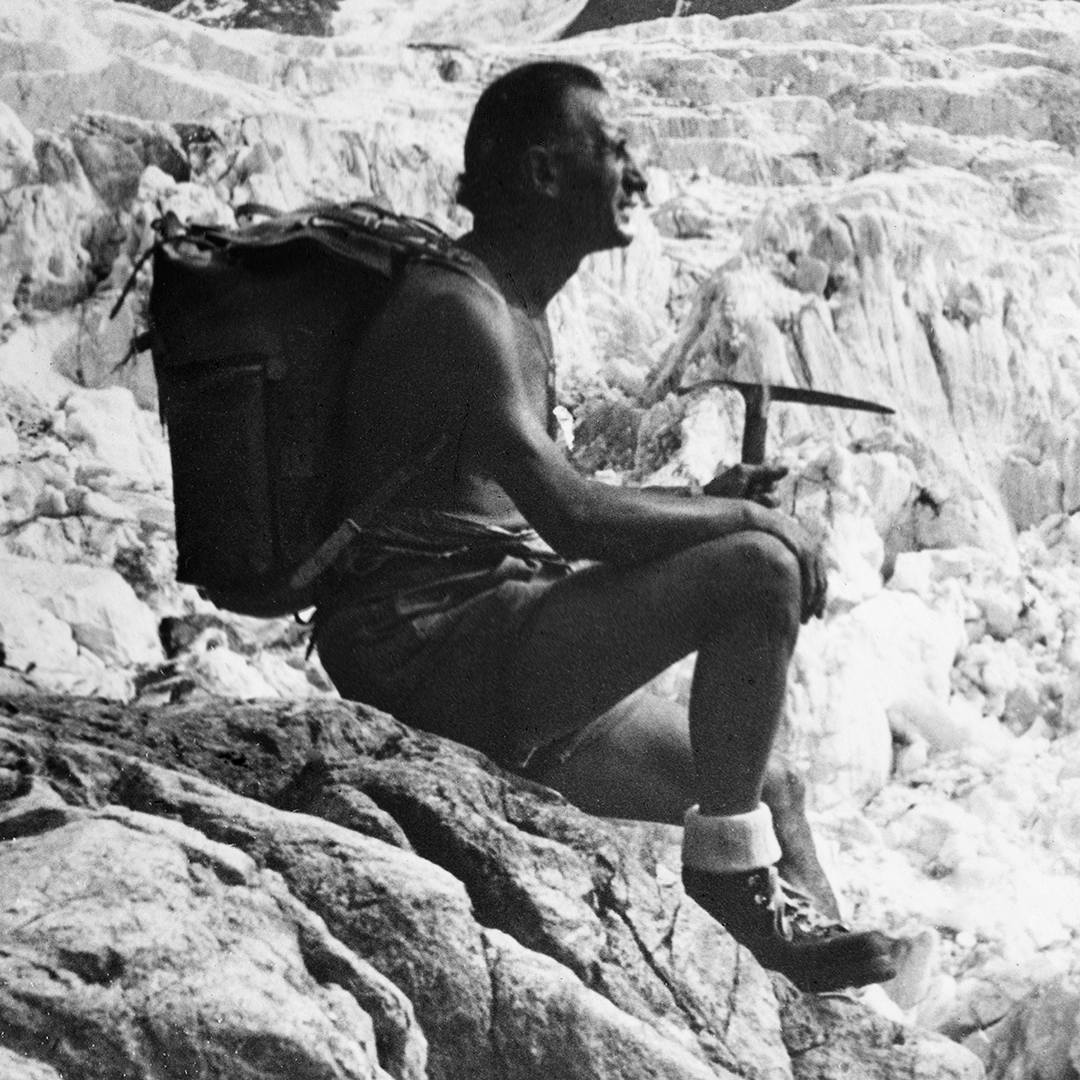 embracing a contoured shock-absorbing layer inside. The sole material represents by itself a compromise between being supple enough for better traction and flexible yet not extremely soft to preclude prolonged wear.

The resulting outlook of these boots might seem quite rough and not so elegant, but these boots appeared to be comfortable enough, functional, and feet safe for all the kinds of military activities, including running, walking, hiking and crossing wet and muddy terrains. 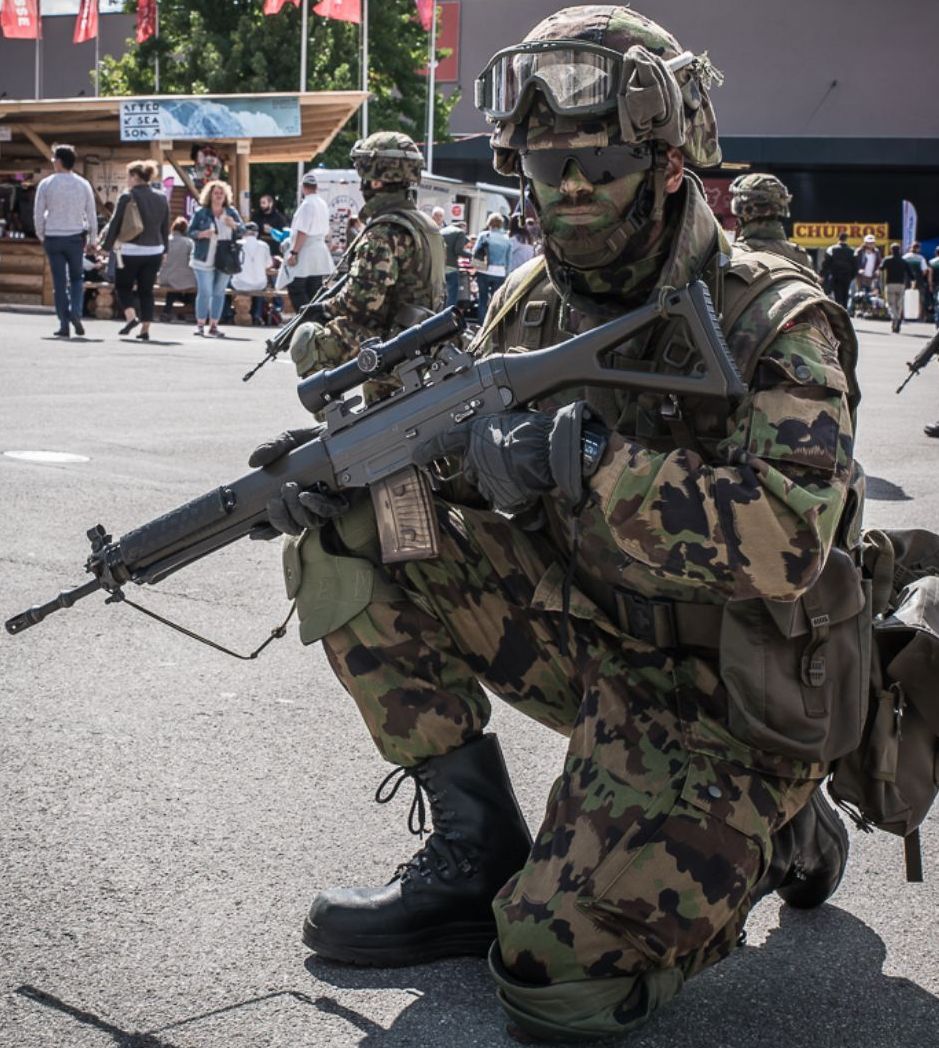 Most boots with high level of excessive rigidity and reinforcement are the source of potential ankle injuries. But the design of Kampfstiefel 90 features flexible multi-layer joint in the ankle area, giving the feeling of wearing the sneakers rather than traditional heavy combat boot. In other words, the leather is extremely supportive around the ankle and the soles feel like you are wearing a sneaker. 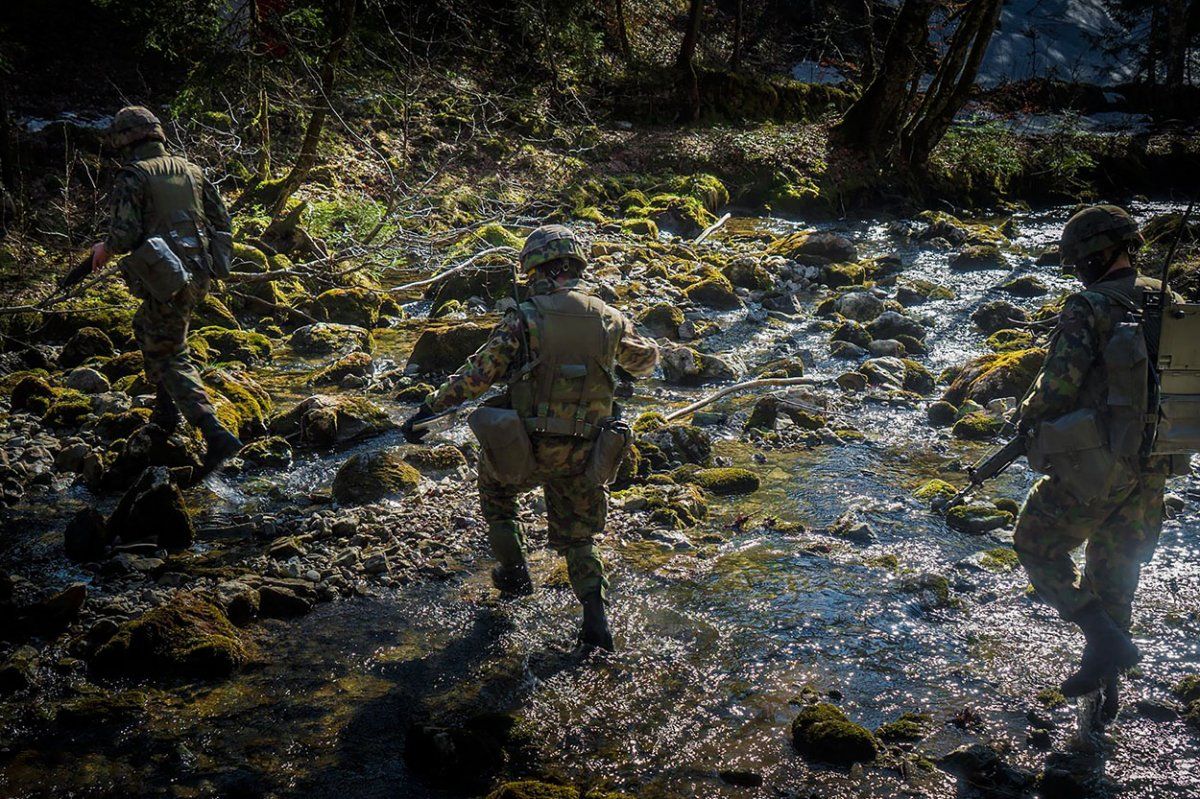 This feeling might seem paradoxical, because the upper of KS90 is made of full-grain thick leather, with a high-cut gusseted boot's tongue and reinforced toe. Under condition of systematic and proper boot's care these high-quality leather boots are practically waterproof, and very well suited to cold and wet weather, and serve faithfully in rain and snow conditions. 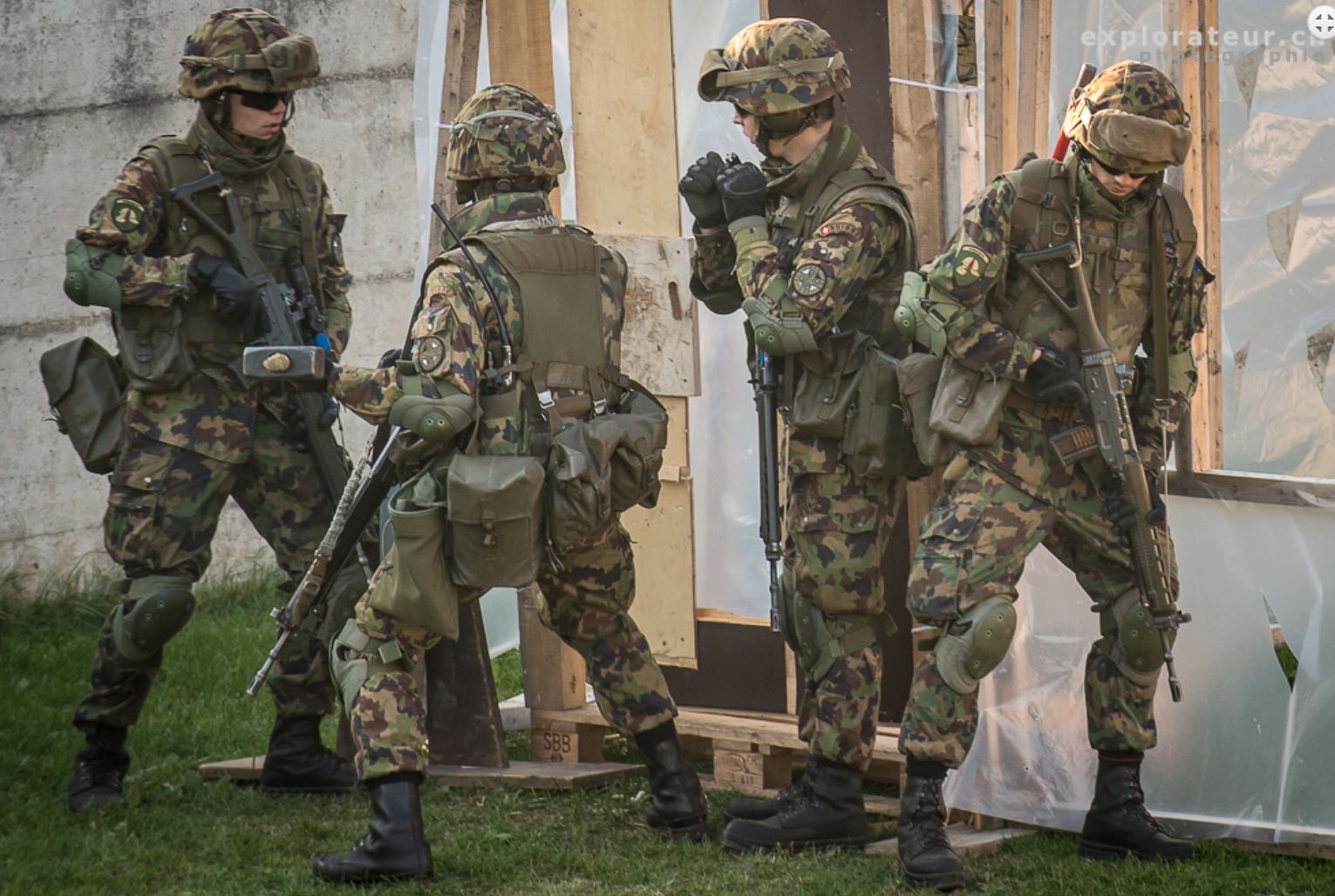 Having pulled the boots on, the wearer feels his/her feet slightly recessed into an improvised "cradle" between the multiple soft padded-leather inserts, which embrace the ankle from the sides like an orthopedic shoe. If the boots are properly laced, the padding gently distributes the loads and pressures on the feet, effectively eliminating the ankle sprains.

However, the years of service in the Swiss armed forces highlighted the big problem of the Gen I boots. The layer-cake design of the sole makes them defenseless of improper long-term storage and drying in excessively hot and dry environments , especially when placed in direct, strong ultraviolet light (i.e. left in the sun). In such circumstances the sealant protecting the layers will degrade over time, eventually disintegrating the layers of the boot sole, and the sole will inevitably degrade. 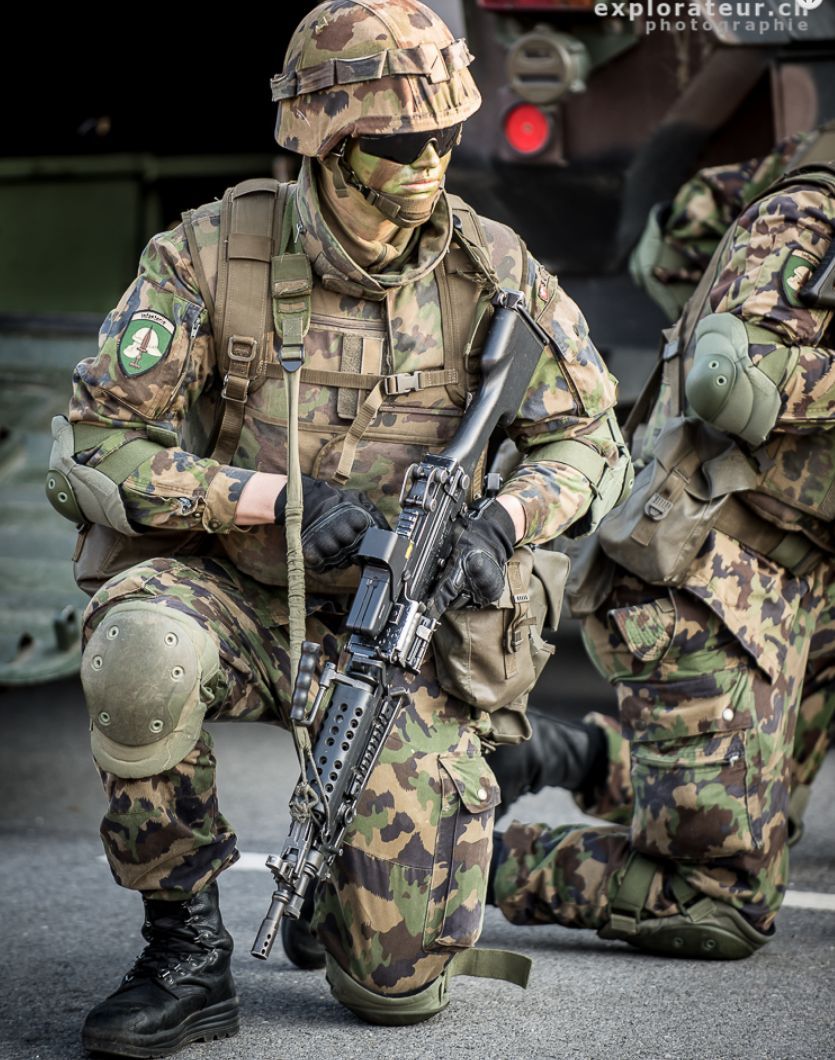 As distinct to many ordinary civil owners of KS90 boots, the Swiss Army use to store their combat boots supplies in climate-controlled military warehouses. 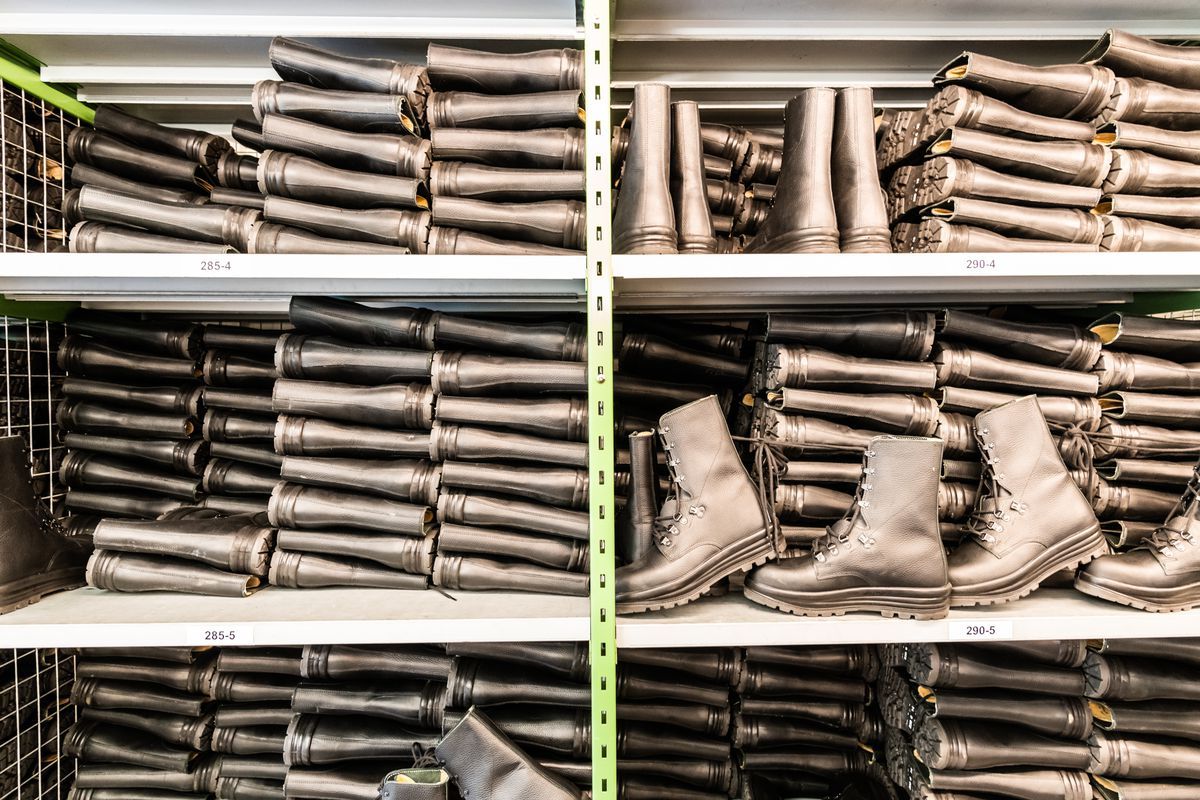 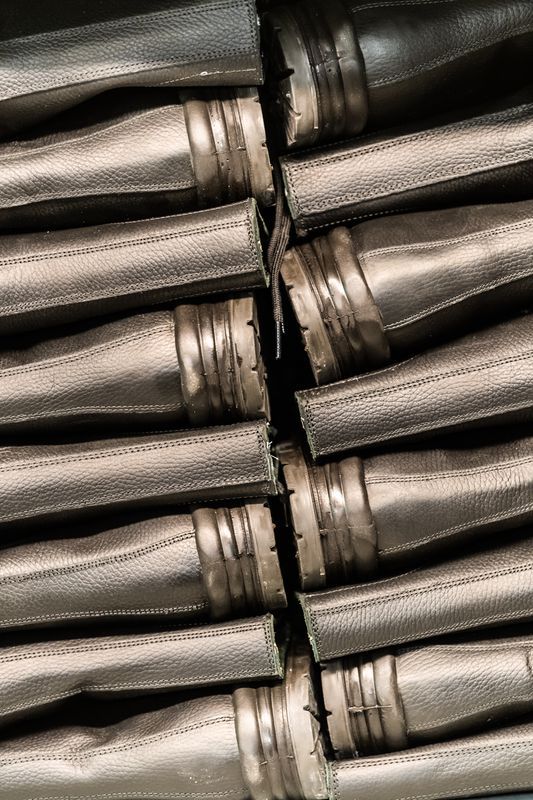 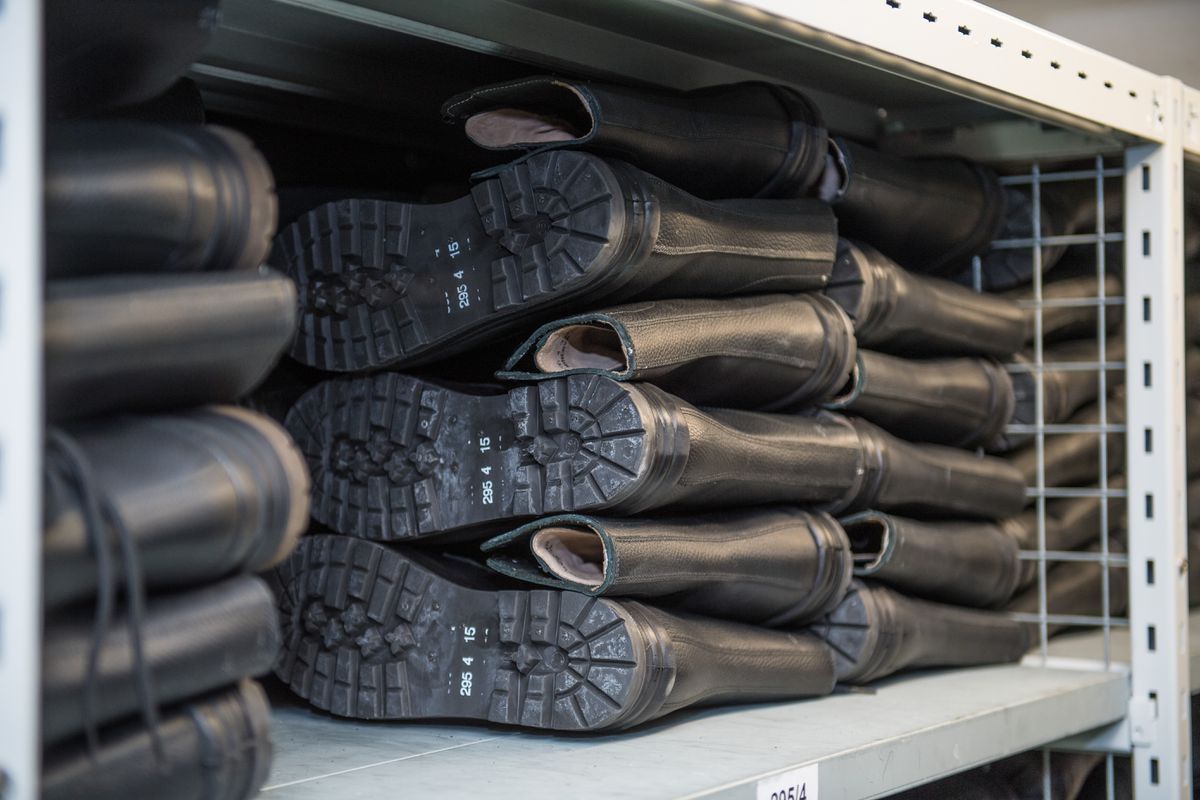 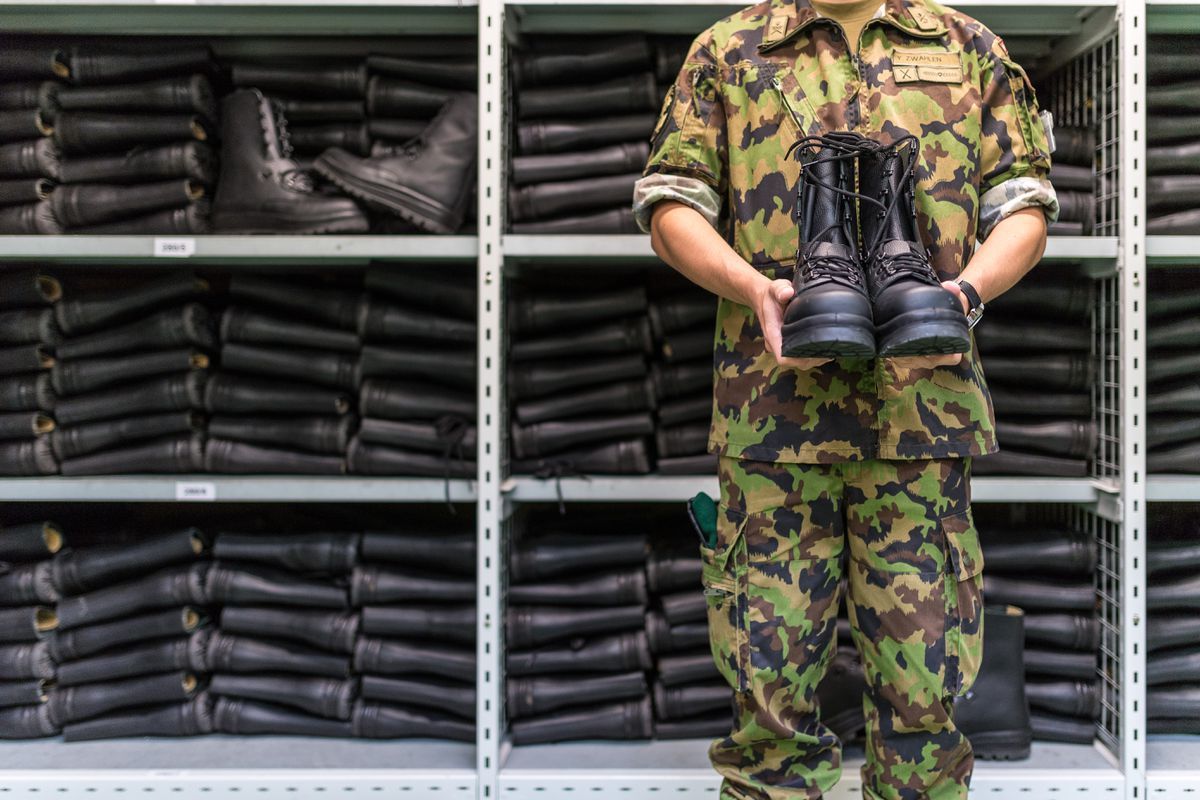 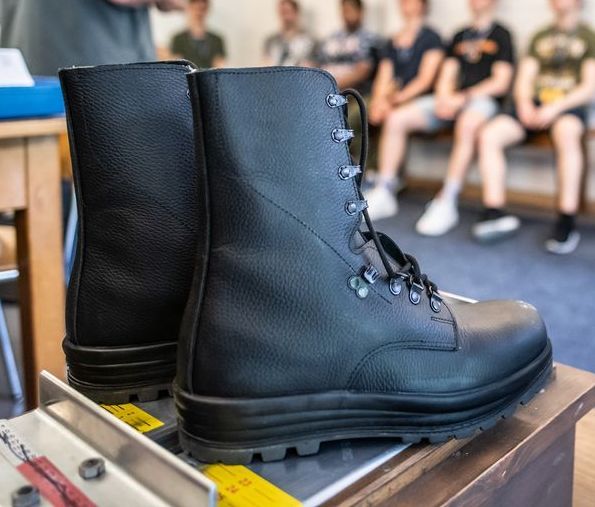 Generation II boots are identical in boot's top construction, except the sole is directly over molded onto the boot. This technology is more technically advanced, resulting in a single piece outsole embracing a cushioning layers confined internally within. 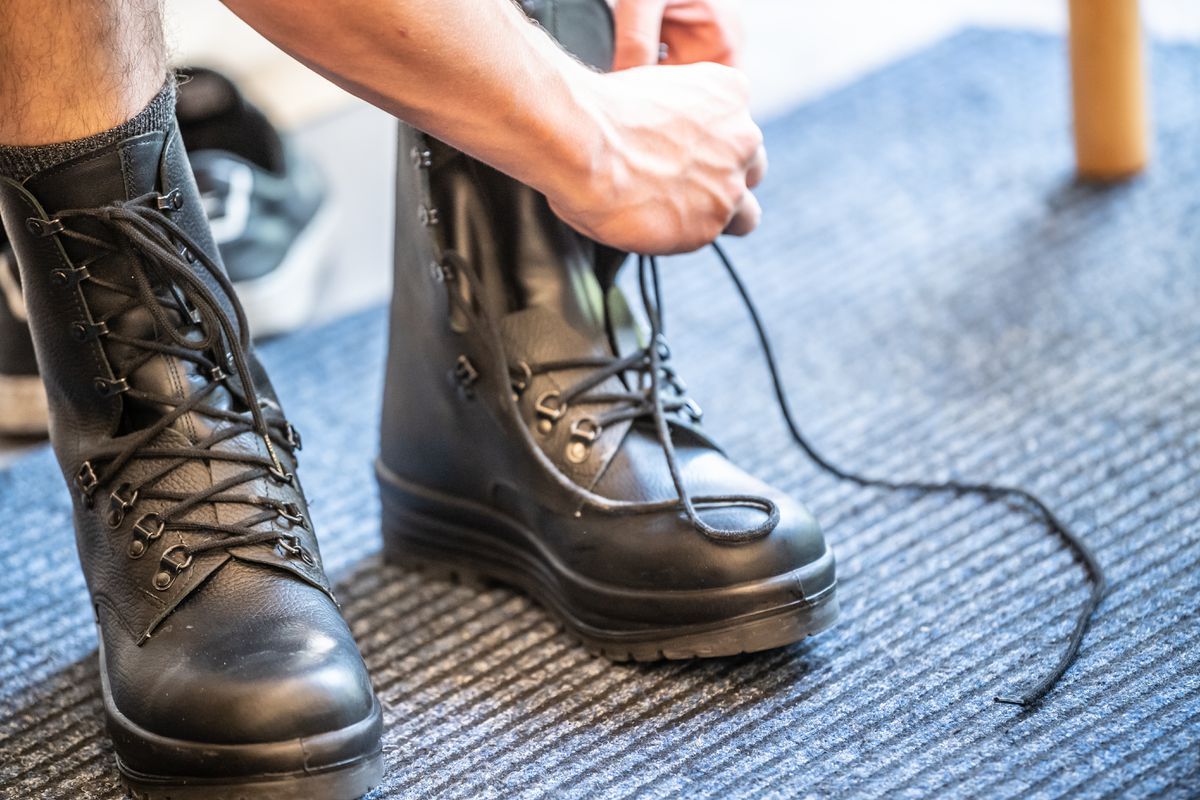 At a first glance, the outward difference between the Generation I and Generation II KS90 boots is faintly discernible, and both kinds of boots are identical in performance, appearance, features, and user comfort. However, Gen II are much more reliable and applicable for long-term storage. 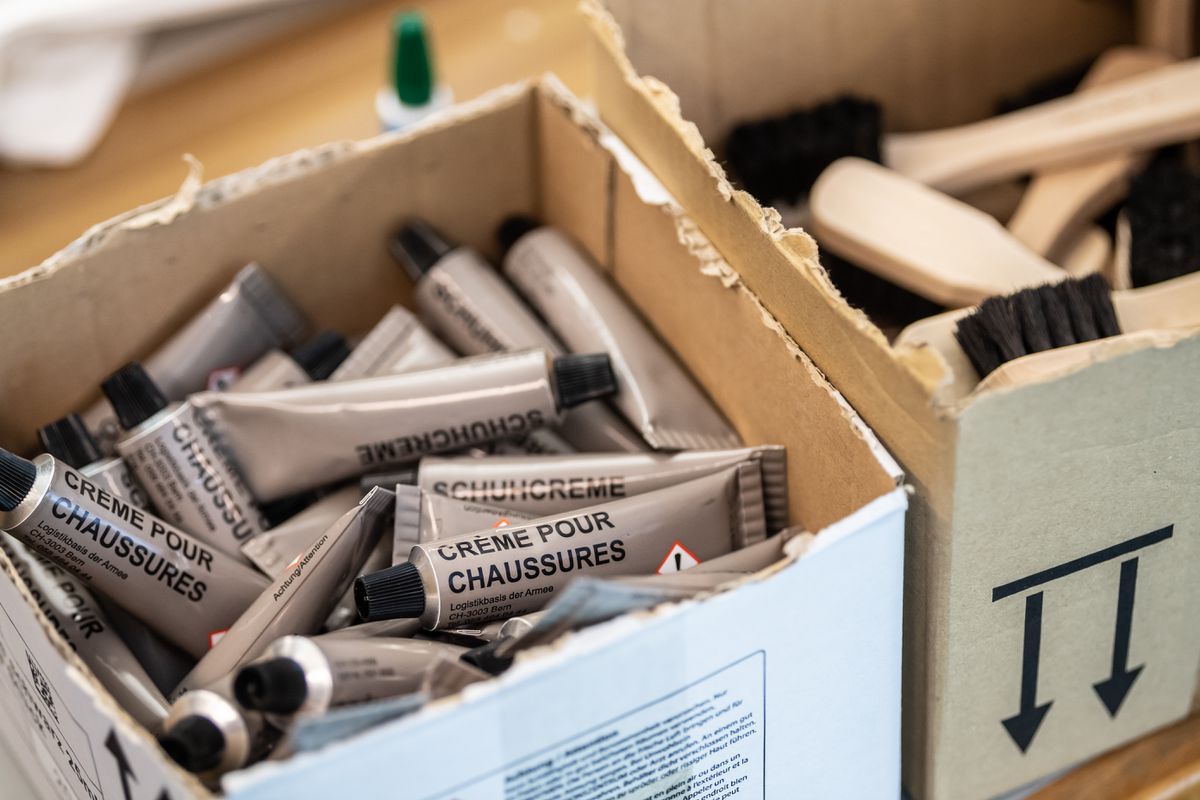 Swiss training manuals recommend you clean these boots with wax and polish them on a regular basis, spray-on water repellent is also recommended when the boot is clean, dry, and polished. It is strictly not recommended to apply water proofing treatments to a wet boot or polish such boots. 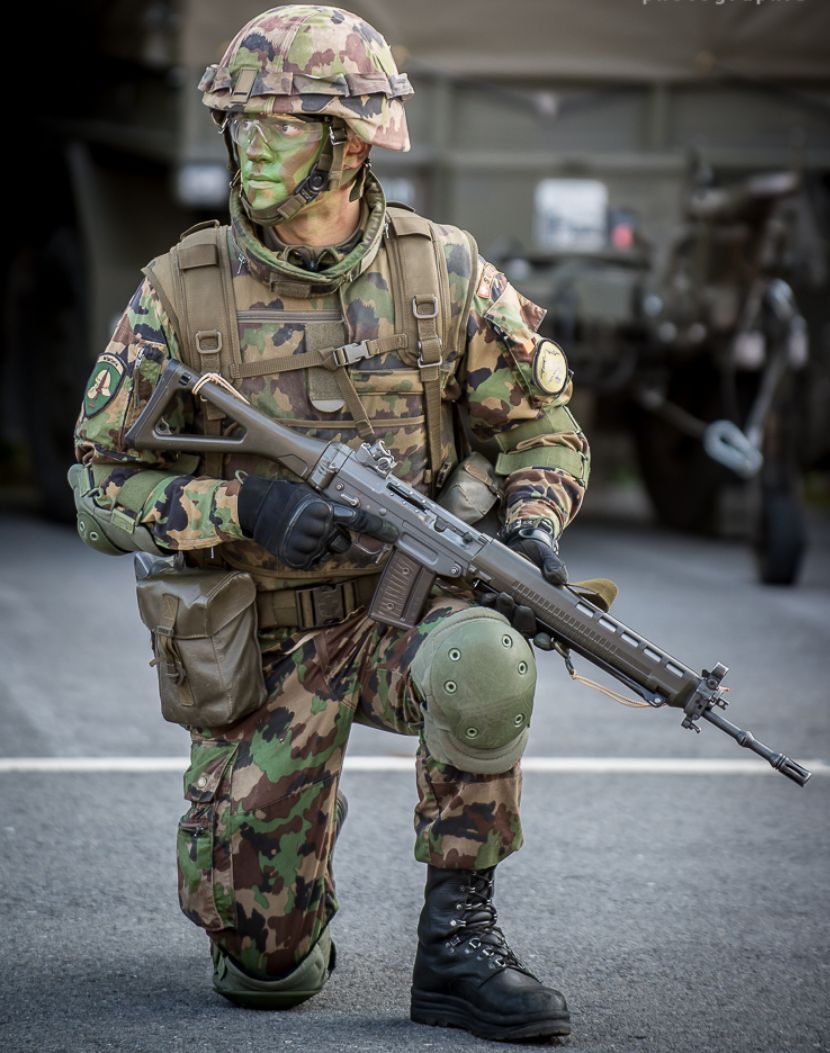 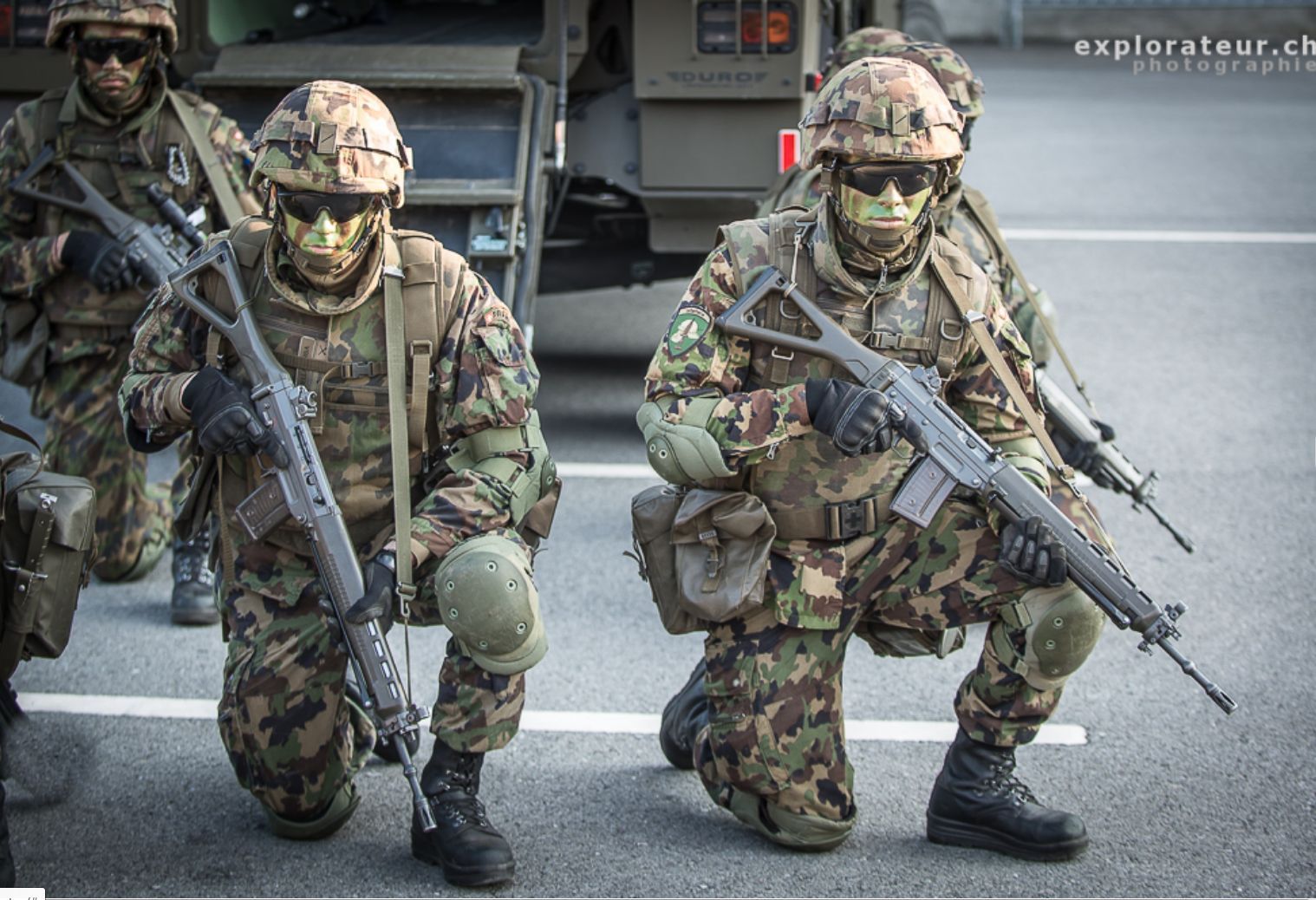