The introduction of new boots instead of the previously used KS90 boots was planned within the framework of IMESS (Integriertes Modulares Einsatzsystem Schweizer Soldat - Integrated Modular Combat System for the Swiss Soldier) implementation. Developed in 2011, IMESS, according to the plans, is to come into force within the current year.

New military boots are going to replace the previous KS90 military boots, which were used in the armed forces of Switzerland during the last 20 years and were available in 96 different variants of the size and width.

Among the most probable candidate boots the Armed Forces of Switzerland has chosen the military boots - KS (Kampfstiefel) of two types (the so-called "light" and "heavy" boots), developed and manufactured by "AKU". 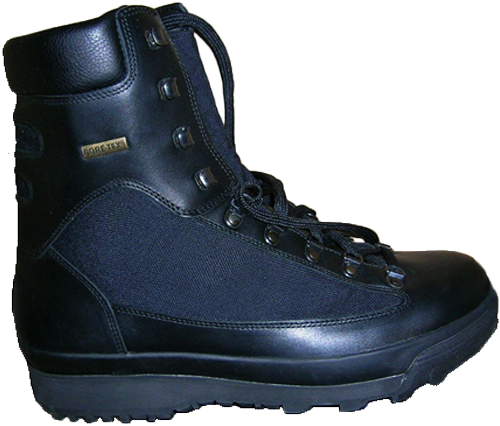 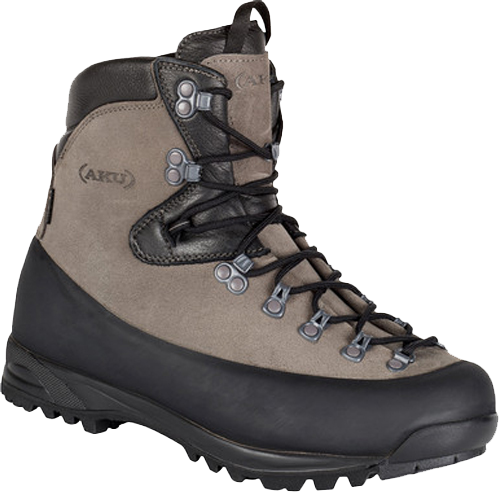 The manufacturer of these boots is "AKU Italia s.r.l." - an Italian company founded by Galliano Bordin in mid-1980 as a small boot repair booth. Practical experience gained while repairing various kinds of boots and the enthusiasm of the enterprise' founder turned a modest shop into a fairly large industrial enterprise. For over 30 years, the company has been one of the leaders in the design and manufacture of high-quality footwear for hikers and skiers.

The main R&D center of "AKU", as well as the trekking and hiking boots production facilities are located in Montebelluna city, the province of Treviso in Northern Italy. Technologically advanced and expensive boots of this brand are manufactured there, often by hand-made. The second production site of "AKU", where more simple and cheap models are manufactured, is located in Cluji Napoca, Romania. 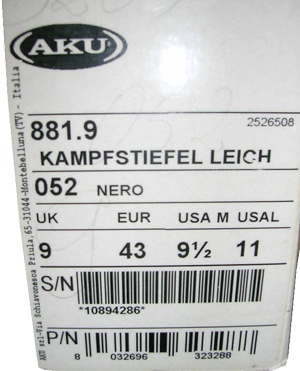 The company invests in research and development of new technologies, which are used in its production. For example, the military boots of "Pilgrim"series by "AKU" are in great demand in the UK . In particular, the Ministry of Defense approved the use of such models as AKU Pilgrim HL DS MOD Brown (retail price is about 159 British pounds) and AKU Pilgrim HL GTX MOD Brown (169 British pounds).

The process of new lightweight boots introduction (as well as new, more technologically advanced and user-friendly socks) was originally planned for about 10 years and consisted of several stages by years:

2010 = Testing of new advanced socks, that help to reduce the likelihood of feet injuries ("Socken / Leisten");

2015 = Order and purchase of the approved new boots from contract manufacturers;

2017 = Official deployment of th approved boots by the Armed Forces of Switzerland. 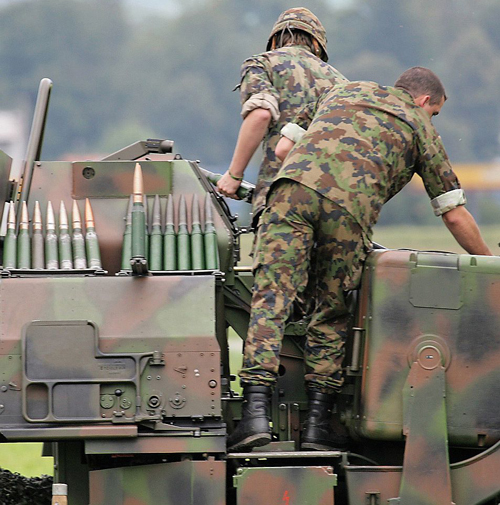 However, according to the information of the Swiss Groung Troops Training Center (Ausbildungszentrum Heer) web-site (www.he.admin.ch) at the beginning of 2016, the time schedule was delayed for several more years. In the Chapter "Neue Fussbekleidung" ("New boots") the following schedule is specified for the "lightweight" boots:

2015 = Preliminary development of an experimental prototype of the boots (Vor-Prinzipversuche);

2016 = Development of an experimental prototype of the boots (Prinzipversuche);

2017 = Testing by the Armed Forces (Truppenversuche);

2018 = Verification tests of the boots by the Armed Forces (Verifikation Truppenversuche);

2019 = The planned purchases of the boots (Geplante Beschaffung);

Regarding the schedule of the new "heavy" boots (Kampfstiefel schwer 14) implementation by the Swiss Armed Forces, the following information is stated on the website: "The decision is not made yet" (Einführung noch nicht bestimmt). 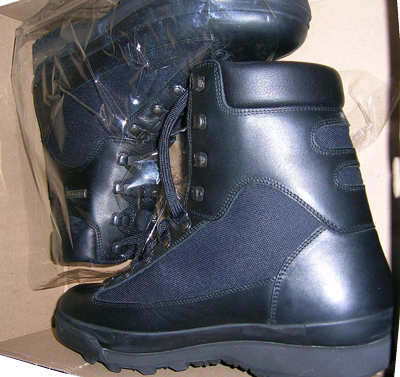 According the user's feedbacks, these boots are quite easy to use, fit the majority of users and need no "breaking in". The boot's lacing system consists of five pairs of "D"-shaped rings and four pairs of hooks and allows to fix the ankle securely. 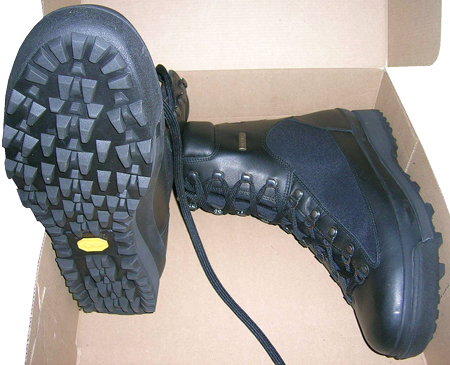 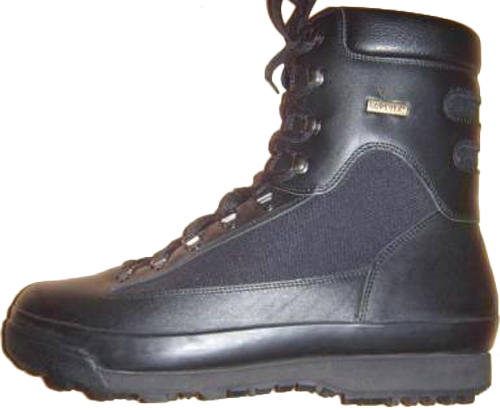 The plane section laces are used, and the design of hooks at the upper part of the lacing reduces the risk of catching on the ammunition parts.

The boot's upper is made of combination of high-quality black leather and hydrophobic nylon (Cordura), the lining is made of the GORE-TEX membrane material. The heel is reinforced with leather patch. These high boots feature soft leather cushion at the top of the boot, the boots' soft leather tongue is stitched high to the top. Damping inserts on the back sides of the boot's upper provide extra flexibility and comfort of wear. The out-sole is produced by "Vibram", the junction of the sole and the upper is covered with protective rubber tape, similar to KS90 boots and other models of mountain boots. 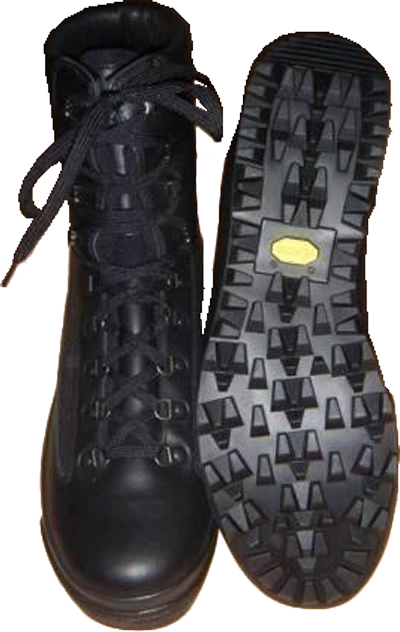 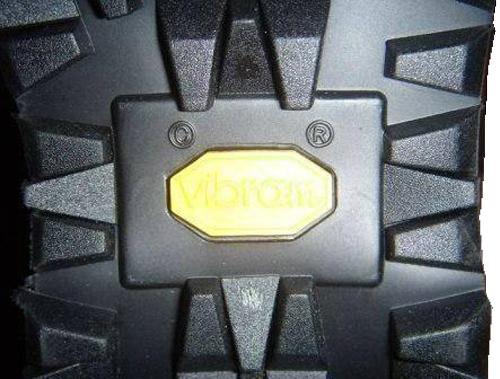 This model of new Swiss army boots is available in sizes ranging from 40 to 46, with half-size options. In Switzerland, these boots cost about 380-390 Swiss Francs.

The second type of new boots, anticipated for introduction by the Swiss army is KS SCHWER GTX, i.e. "heavy" military boots manufactured by "AKU" company. Sufficiently reliable and comfortable, they are designed for more severe conditions, as compared with the previously described "lightweight" boots.

These combat boots are quite sturdy and fit good for rough work and challenging mountain hiking, they are waterproof and easy to use. Despite of comfort of use, it is still necessary to "break in" these boots until it acquires the form of the feet and stop rubbing or pressure. These footwear manufacturing quality is high, and quality raw materials are used for its production.

Among the advantages of these boots one should mention: high quality, beautiful appearance and good functionality. Among the deficiencies the following characteristics were identified: high price (perhaps, reasonably high) and creaking noises, that appear in the beginning of the boots wearing, however this effect goes away after some time of wear. r

The tests were carried out with the AKU KS schwer GTX 14 boots of the European size 39.5. The weight is a pair of such boots is 1905 grams (according to the manufacturer's information, the weight is to be 1820 grams).

+ The boot's upper is made of quality leather (2.6 mm of thickness) produced by "Perwanger", a long-term supplier of cattle leather (of "meat" breeds) from the Alpine regions. This company is specialized in providing the leather to the manufacturers of hiking boots and equipment;

+ The out-sole is made of composite material: glass fiber plus polyurethane and 4-6 mm layer of hard ethylene - EVA ("Mischung aus Glasfasern und extra steifem Ethylenvinylacetat"). EVA is a light and resilient material having good damping properties, adhesion to various materials, and resistance to solvents, oils, ozone and high temperature;

+ The junction of the sole and the boots upper is covered with wear-resistant protective rubber welt, just in the same way as in KS90, the previous model of Swiss combat boots; the boot's welt is adapted for fastening of skis and such climbing equipment as crampons; 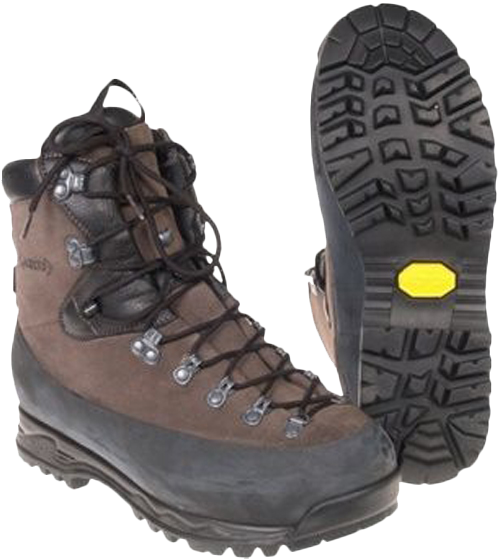 The manufacturer of KS HEAVY 14 GTX is positioning them as safe and comfortable footwear for hiking and work, for bad weather and even winter. These boots not only allow the feet to "breathe", but also protect them against the ingress of moisture from the outside. The crampons mounting option defines the basic consumers of such boots: the Armed Forces, the hunters, the forestry workers, etc ..

These boots are made in Italy, and they are provided with two-year manufacturer's warranty. The price of a pair of such boots is 398 Swiss Francs.

The abbreviation "KS" ("Kampfstiefel") - i.e. "boots for combat operations" is used in the name of this model because the Swiss Armed Forces has chosen them as the new boots candidate model for introduction.

The testing of AKU KS schwer GTX have been performed for a week during the winter, in a mountain forest terrain, including bad weather conditions. These boots showed good moisture protection and robustness, but during prolonged exposure to the snow the feet began to freeze, however, it is peculiar to any boots. During the testing of these boots no blisters or chafing did appear.

The boot-tree design has proved to be quite convenient and comfortable for the feet, while the overall boot design appeared to be rigid and classical, strong and heavy. At first these boots were creaking a bit, but eventually this stopped. The out-soles tread showed good and stable adhesion on different types of surfaces, even on steep slopes. It is easy to work in these boots, but it's hard to wear them really long. Although the cost of a pair of such boots is about 400 Swiss Francs, in case of beed the worn-out soles can be replaced with a new ones, that will eventually cost less than a pair of new boot, while one can enjoy the undeniable advantages of a well-worn and "broken-in" habitual boots. 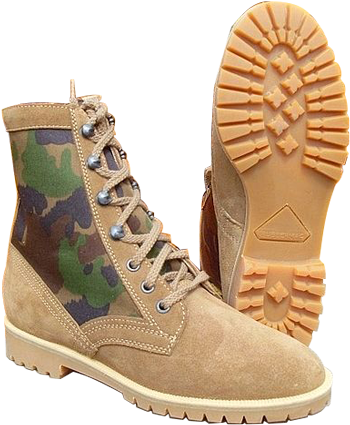 The Swiss combat boots model 06 for hot and arid climate were introduced in 2006 as the Swiss soldiers have been actively involved in international peacekeeping and military operations, not only in Kosovo but also in the hot desert countries (Iraq and Afghanistan), while the used conventional KS90 boots and TAZ90 camouflage uniforms were not convenient in such conditions. 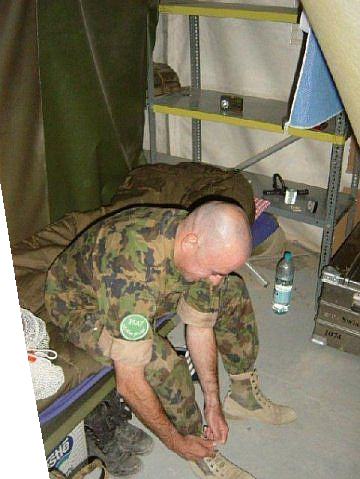 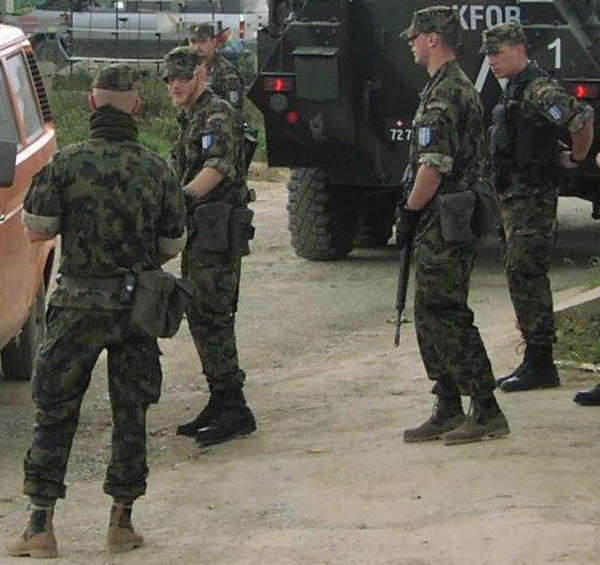 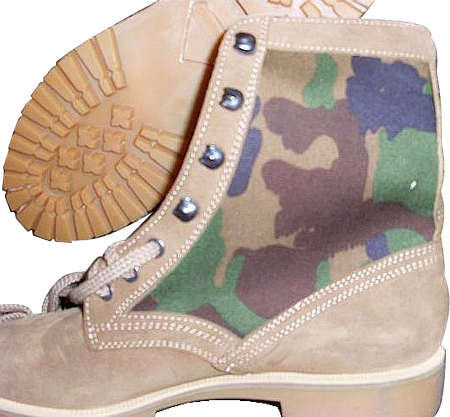 A year later a new Swiss "desert" uniform model TAZ 07/w (Tarnanzug 2007/Wüste) was introduced. This camouflage uniform is just a modified version of standard "Swiss woodland" TAZ90, but made of more lightweight and "breathable" materials, more suitable for the desert by colors. 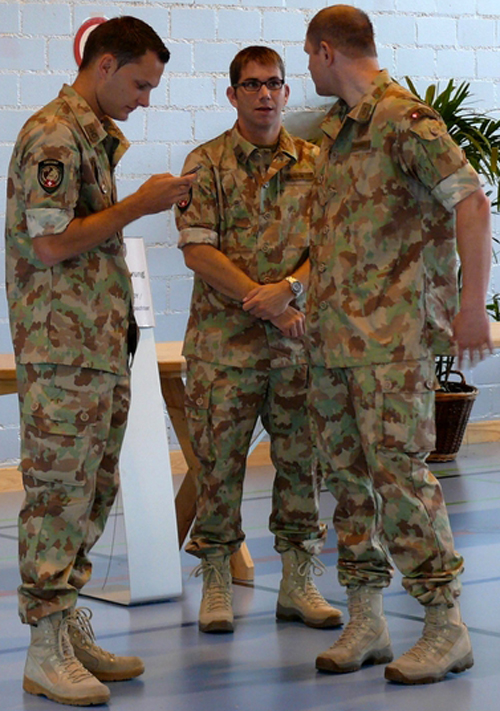 The "desert" uniform of the Armed Forces of Switzerland is also characterized by loose cut. This uniform is very rare, even in view of the relative rarity of conventional TAZ90 Swiss camouflage, because it is produced in very limited quantities exclusively for the soldiers who participate in the missions abroad, and the form is not issued forever, but under condition of return back after-service. Accordingly, the successful search for this uniform on sale is extremely difficult, almost impossible task. For political reasons, the Swiss armed forces are involved in very few peacekeeping and stabilization operations abroad.

The fabric of the Swiss TAZ90 uniform is characterized by high density and resistance to tear and wear, and usually this uniform issued to soldiers for use during the periodical military training and exercises, with storage during off-duty time, and the service period of this uniform under such circumstances is about 20 years.

In the photo (058) below represents the Swiss desert boots manufactured by "BALLY". The lower part of these desert boots is made of suede (toe, heel and upper, and the reinforcement elements such as top and back ribbon, and the base of the lacing system), while the side parts are made from the fabric of the Swiss standard TAZ90 camouflage. The light brown polyurethane out-sole are manufactured by "Vibram" and feature standard classical tread pattern. The method of the out-soles attaching is gluing and stitching. These boots feature no additional reinforcement components such as slash reinforcing strips in front of the malleolus feet bones, like on the American or German desert boots. 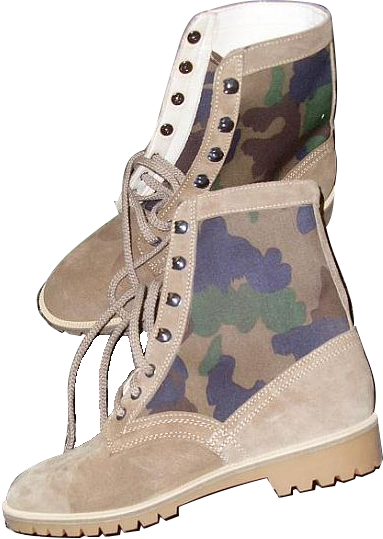 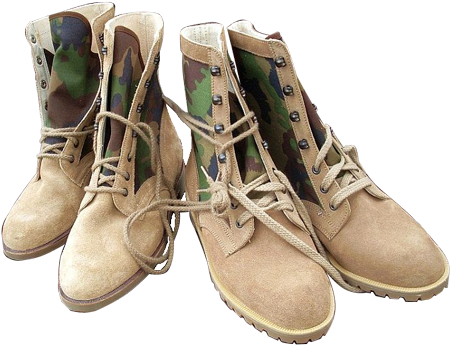 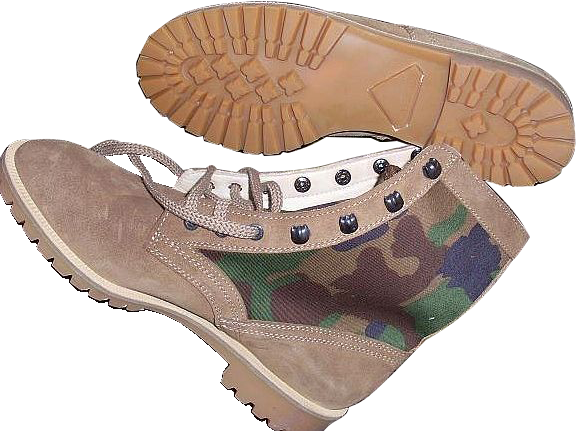 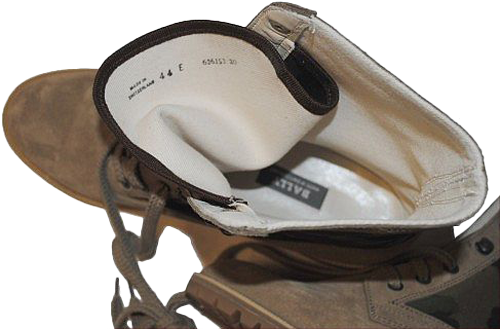 The inner lining is made of light and breathable white fabric, the boot's tongue shows the size and widths of the boots as well as factory number and country of origin ("Made in Switzerland"). The manufacturing company brand name ("BALLY") is indicated listed on the insole inside the boot. The lacing system consists of three pairs of simple round eyelets in the lower part of the lacing and four pairs of hooks at the upper part. The tongue is stitched high to the middle of lacing. The boot's tongue is also made of lined TAZ90 camouflage fabric. 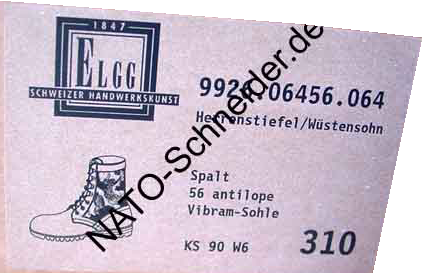