The 198th Division staff dispatch rider wears the M1934 motorcylists' rubberised coat. He carries one set of ammunition pouches for his Karabiner 98k, the M1935 dispatch case and leather gauntlets. 'Square-lens' protective goggles are on his helmet. This division, raised in Bohemia-Moravia, occupied Denmark, taking the Danish flag as its vehicle-sign, before fighting in France.

This Medical Corps orderly, assigned to a company of 163rd Infantry Division in Norway, wears the M1934 field cap and M1935 field greatcoat. He carries medical pouches on his belt, the gas mask slung on his back, and the larger, one litre, medical corps canteen at the front of his left hip. He wears the red-cross armband on his left upper sleeve and the medical qualification badge on his right cuff. He is holding a field dressing. 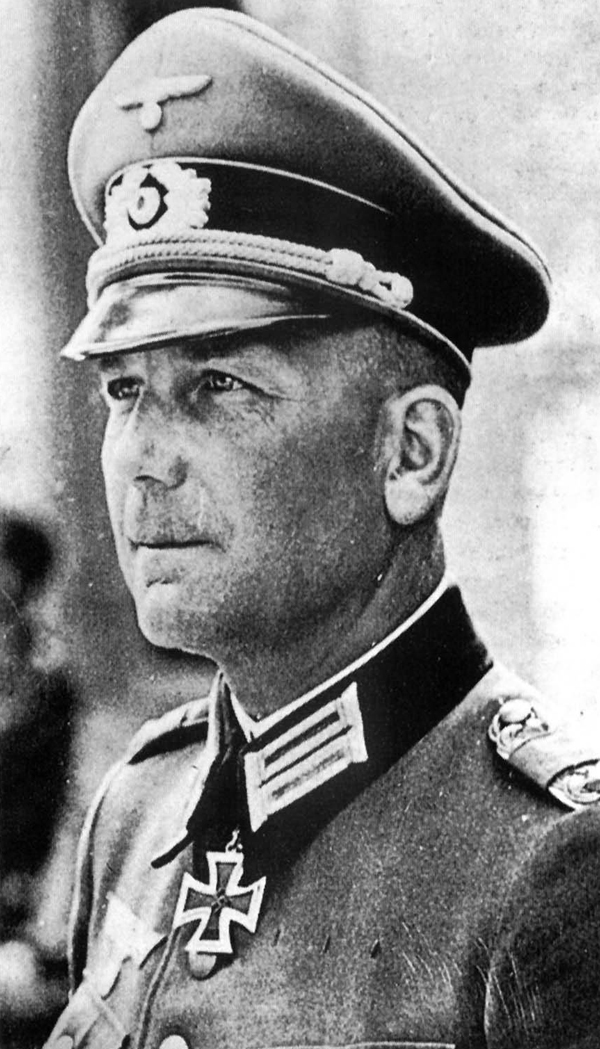 France, May 1940. An infantry Oberst in M1935 field uniform. The 'saddle-shape' of his M1935 officer's peaked cap is particularly noticeable. The distinctive officers' collar-patches, unlike those of other ranks, retained the branch colour piping throughout the Second World War. This officer is wearing the Knight's Cross, and his regimental number is concealed by a feldgrau slip-on shoulder strap. (Brian Davis Collection)

This officer in 3rd Mountain Division in Poland and Norway, wears platoon leader's field equipment over his M1925 wind-jacket, with first model ammunition-pouches for his MP38 submachine gun, shown here with the stock folded. Against regulations, he retains his officers' brown belt, and carries a M1931 model rucksack, later superseded by a more utilitarian wartime model. Note the helmet's national shield, worn in the Danish and Norwegian campaigns despite orders on 21 March 1940 to remove it, and the distinctive 'T' form eagle and cockade worn on the mountain cap.

This Bicycle Squadron officer wears regulation platoon leader's field equipment, with the prescribed other ranks' black belt, with one MP38 ammunition-pouch and a M1935 dispatch-case. He wears the cavalry golden-yellow branch colour and the Gothic A for Aufklärung - 'reconnaissance' on his field shoulder-boards. His battalion invaded the Netherlands in May 1940 with 254 Infantry Division.

As Second Gunner, this infantryman wears one set of ammunition pouches for his Karabiner 98k and, for close combat, a P08 Luger pistol. He carries two 300-round ammunition boxes and an M34 single-barrel case on his back - LMG34 barrels were normally changed after 250 rounds of full automatic fire. This regiment fought in Poland, Belgium and France with 28 Infantry Division.

This assault boat engineer has camouflaged his helmet with mud and wears simplified field equipment - an M1928 leather ammunition-pouch for his MP28/II Schmeisser submachine gun, a gas mask canister, bayonet and entrenching-tool. He wears the Helmsman's qualification-badge in the aluminium machine-embroidered version introduced 7 November 1935, and, against regulations in a forward area, feldgrau slip-on unit shoulder-slides. He carries an assault-boat paddle and M1924 stick-grenades. His battalion fought with the 30 Infantry Division in Poland, Belgium and France. 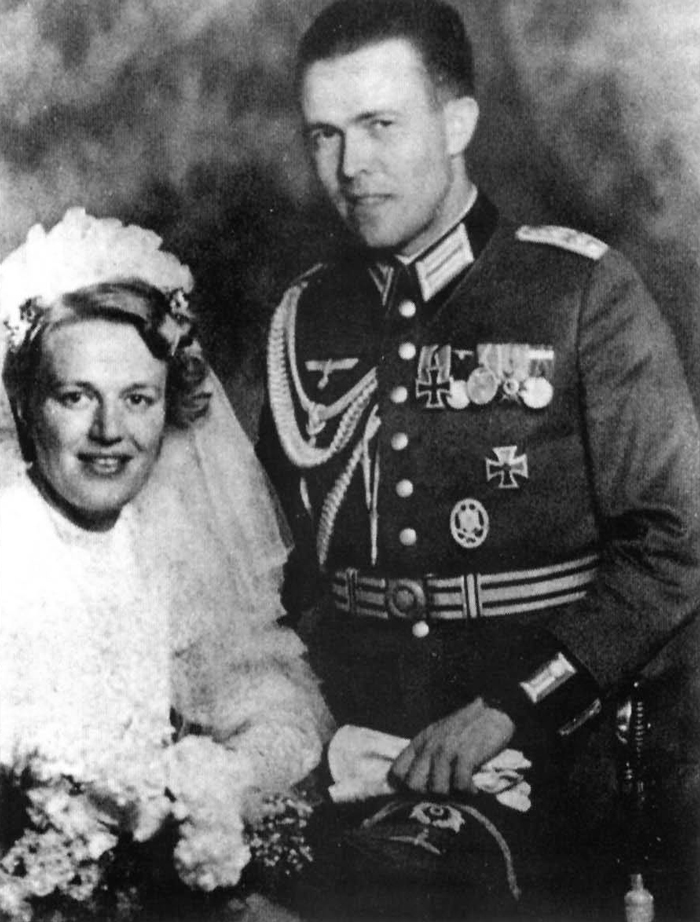 A Hauptmann in M1935 full ceremonial uniform poses with his bride on his wedding day in July 1940. He wears the Iron Cross 1st and 2nd Class, Wehrmacht long-service medals and 'Flower Wars' campaign medals, as well as the General Assault Badge. (Brian Davis Collection)

This battalion commander wears the M1935 tank crew uniform and M1938 officers' feldgrau field cap, his feldgrau slip-on shoulder straps concealing his regimental number but not his rank. He carries the P08 Luger pistol in a hardshell holster, and 10 × 50 'short design' binoculars. His awards are the aluminium Tank Combat Badge on his left breast, and the 1939 Iron Cross 2nd Class ribbon from his first button-hole. He carries a tank-commander's headset with rubber earcups. His regiment fought in Belgium and France with 7 Panzerdivision. F2: Panzerschütze, Panzeraufklärungsabteilung 5, field uniform, Aisne, France, May 1940 AFV-crews often wore their feldgrau field greatcoats to protect their black uniforms from dirt and grease, even though black was intended to disguise such soiling. This armoured-car driver wears the unpopular padded beret, a Walther P38 pistol in a hardshell holster and general purpose goggles. This battalion fought in Poland, Luxembourg and France with 2 Panzerdivision.

The regiment, which fought under direct OKH command in Poland, Luxembourg and at Dunkirk, was the first army unit with an elite unit cuff-band and shoulder-board monogram, which was retained in battle. This battalion commander, examining a discarded French M1935 tank-crew protective helmet, has removed the national shield from his helmet. He wears the Infantry Assault Badge in bronze for motorised infantry on his left breast-pocket, carries the M35 map-case with modified fastener, a P08 Luger in a hardshell holster, and 6 × 30 standard binoculars. 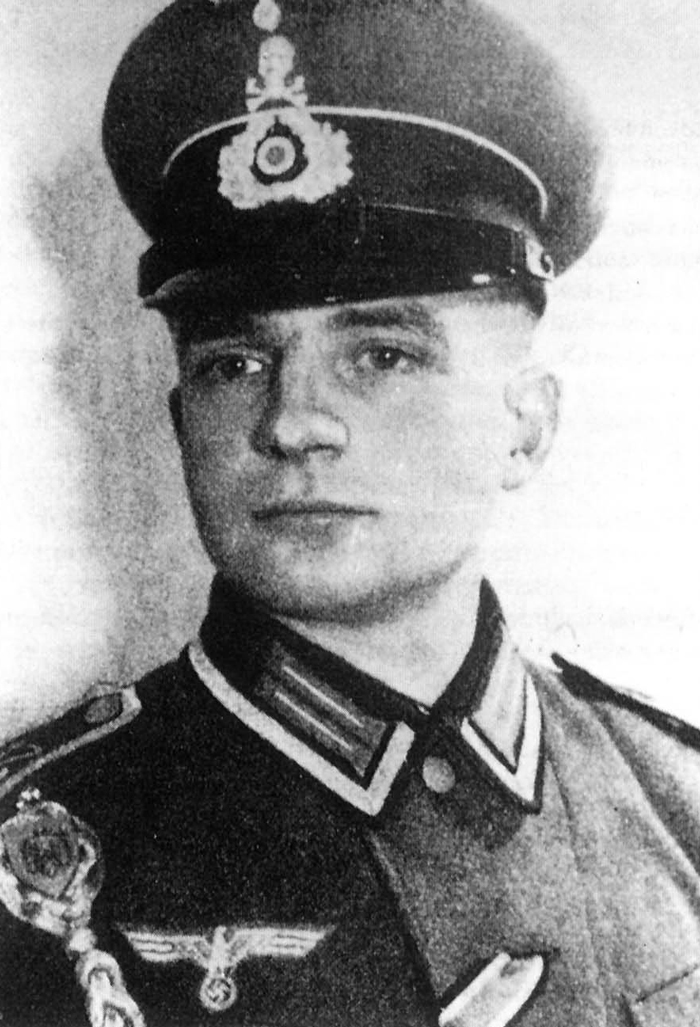 An Unteroffizier of the 17th Infantry Regiment in Germany in July 1940 in walking-out uniform, wearing the Brunswick skull and crossbones commemorative cap-badge of his regiment. Note the marksman's lanyard, the Iron Cross 2nd Class button-ribbon and the typically pre-war style of shoulder-strap numerals. (Brian Davis Collection)

From 10 May 1940 engineer battalions of Panzer divisions wore black-and-white branch colour piping, instead of black, which was invisible on their black uniforms. This reverted to black in 1941 when special feldgrau AFV uniforms were adopted. This Oberfeldwebel (Oberschirrmeister), supervising his company's technical equipment, wears his yellow wool embroidery trade-badge on a dark bluish-green facing-colour disc, with the aluminium wire edging denoting his NCO status. His battalion, formed 15 April 1940, fought in France with 1 Panzerdivision. 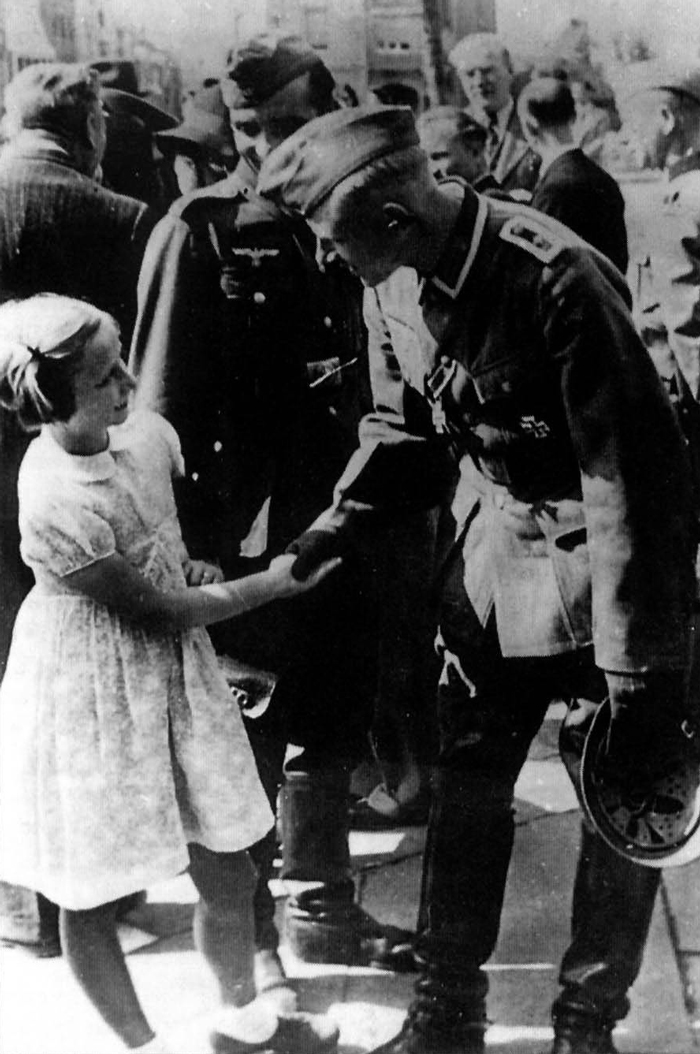 Luxembourg, 18 September 1940. A cavalry Wachtmeister in parade uniform without the usual belt, but with the steel helmet, which he has removed in favour of an M1938 field cap, as he tries to make friends with a local girl. Unlike most scenes of this type, this one does not seem to be stage-managed. He wears the Iron Cross 1st Class and seems to have been awarded the Iron Cross 2nd Class quite recently. Note the highly polished riding-boots. (Josef Charita)

The A-frame battle-pack, introduced 18 April 1939, was still comparatively rare in 1940, so infantry and assault engineers improvised, using M1939 black leather belt supporting straps to carry the M1931 shelter-quarter wrapped around the M1931 mess-kit. This infantryman, with the 58th Infantry Division in action in France and Belgium, wears the standard short entrenching-tool, bayonet, scabbard and frog on his left back hip, the M1938 gas mask canister above the M1931 bread-bag on the lower back, and the M1931 canteen on the right back hip.

This member of the 13th Motorised Division, newly arrived in France, undertakes labouring duties in the M1933 white twill fatigue uniform. This uniform was already being replaced by the more practical reed-green, and junior NCO collar insignia was worn until 22 August 1942.

H: THE ARMY OF OCCUPATION

Traffic Control battalions were raised to regulate the swiftly advancing German road-traffic. Personnel wore police uniforms, adopting in early 1940 Army uniforms with orange branch colour pipings and a distinctive armband, but not the arm-badge, cuff-title and duty gorget normally associated with German Military Police. Although feldgrau collars, shoulder-straps and trousers were prescribed in May 1940, they were not general issue until 1941-2, and so this NCO, his battalion operating under OKH command in occupied northern France, still wears M1935 bluish dark-green facing-cloth collar and straps and stone-grey trousers.

The deputy commander of the 215th Infantry Division, on occupation duties with the 1st Army in eastern France, wears the officers' service uniform with the M1937 officers' piped field tunic and carries a Walther PPK 7.65mm Luger pistol in a hardshell holster. He wears the Iron Cross 1st Class on his left breast pocket, the 1914 2nd Class ribbon and bar on his second button-hole, and the Narvik Shield for service in the Norwegian campaign.

This soldier at the HQ of 672 District Command, covering Brussels, wears the guard uniform. It is a more formal field uniform with the marksman's lanyard and equipment limited to belt, ammunition-pouches, bayonet and scabbard. As a lance-corporal, with six years seniority and little likelihood of promotion to NCO rank, he wears the uncommon chevron and pip sleeve rank insignia worn until the end of the war by soldiers not promoted to the new Stabsgefreiter rank after 25 April 1942