Special uniforms for other branches

General Staff officers wore bright aluminium collar and cuff-braids on the Waffenrock and matt aluminium thread collar-patches on the field tunic in the traditional Kolben pattern, whilst OKW and OKH officers wore the same insignia in bright gold thread on the Waffenrock and matt gold thread on the field tunic. These officers also wore general-officers' trouser and breeches pipings and braids in crimson facing-cloth on all uniforms.

Instead of the field cap, Mountain Troops wore the peaked mountain-cap used by German and Austro-Hungarian troops in the First World War - mountain troops were recruited heavily from Austria. The standard model, introduced about 1930, was in feldgrau cloth with a flap secured by two 12mm matt grey painted buttons, matt gold for general-officers. The eagle and cockade insignia was the same as for the M1938 officers' and M1934 other ranks' field caps, but officers did not adopt the aluminium and gold crown and flap pipings until 3 October 1942.

The commando units of Army Intelligence (Abwehr) wore German or foreign uniform appropriate to the occasion. It is known that some Abwehr troops wore Polish, Belgian and Dutch uniforms during the Blitzkrieg period. From 13 November 1939 the inmates of the four Army Penal Battalions wore the standard Army uniform without any decorations, national, rank or branch insignia, and probably also a belt-buckle with a plain pebbled disc.

Staff and Infantry ranks are normally given, but are in brackets where the insignia illustrates a rank variant. Most Bandmaster Officer and both Technical NCO ranks are omitted, and insignia on camouflage and fatigue tunics are excluded.

All ranks of mounted personnel of the cavalry or any other branch wore stone-grey (from April 1940) feldgrau riding-breeches with grey leather reinforcements. From 12 November 1934 motorcycle couriers and personnel in motorcycle reconnaissance battalions were issued feldgrau special clothing, consisting of a motorcyclist's protective greatcoat, a woollen turtle-neck sweater, long woollen stockings, and waterproof cotton gauntlets. The feldgrau heavy twill cloth M1934 greatcoat was rubberised on both sides and had a large feldgrau cloth collar, with feldgrau facings from 22 June 1935, bluish dark-green facings from November 1935 and finally back to feldgrau cloth in May 1940. Insignia was confined to shoulder-boards or straps. 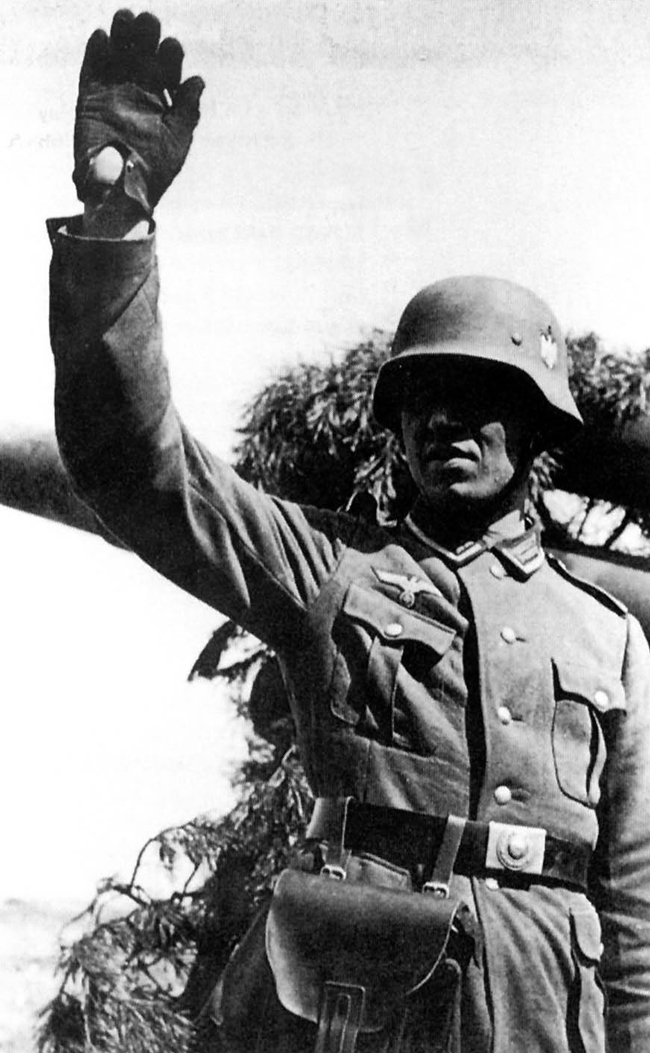 A good view of the M1935 field tunic worn by a Wachtmeister of Artillery in France, May 1940. His lack of field equipment and M1935 dispatch-case with modified fastener suggest assignment to the Regimental Staff. (Brian Davis Collection)

Motorised Artillery and Motorised Infantry vehicle crews, Motor Transport drivers, and guards and sentries were issued the feldgrau waterproof M1934 surcoat. It was the same design as the field greatcoat, but ankle-length and cut generously at the waist to allow wear over a field greatcoat. Smoke Troops were issued protective clothing consisting of a dark-brown single-breasted leather tunic, trousers, gauntlets, peaked cap, face-mask and goggles.

On 26 August 1939 220 1,700-strong pioneer battalions were formed from members of the RAD (Reichsarbeitsdienst, the Nazi labour service) for construction duties along the eastern and western frontiers. Personnel wore RAD uniforms and insignia, changing to Army uniforms during the winter of 1939-40.

The uniforms and insignia of Army Officials, including Chaplains and Sonderführer will be covered in Volume 3.

The rank structure of the German Army used a system established on 6 December 1920. Officers were divided into four groups: general-officers, field officers, captains and subalterns. By tradition the lieutenant-general rank indicated the officer's original branch of service, but in the case of officers of combat branches there was no differentiation in the insignia. 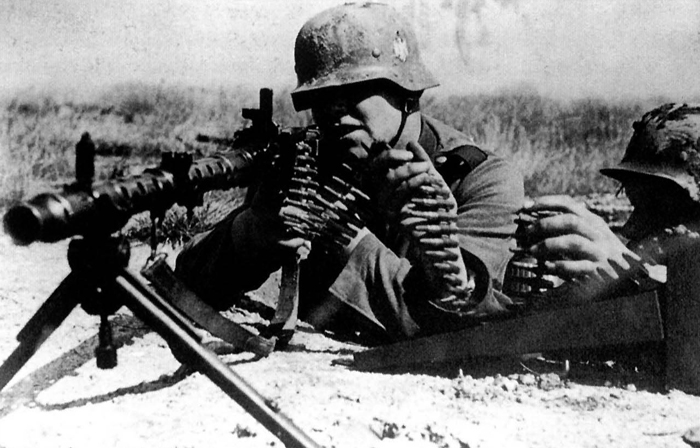 The first and second gunners of the section LMG team in field uniform operating their LMG34 machine gun in France in May 1940. Both soldiers have rubbed mud on their helmets as makeshift camouflage. Their M1935 field tunics have M1938 rounded shoulder-straps with unit numbers removed as per regulation. (Brian Davis Collection)

From 31 March 1936 Bandmaster Officers were grouped as a separate rank-class as Music Directors, Senior and Junior Bandmasters. Lacking power of command, they wore officers' uniforms and insignia, enjoyed officer status and were the equivalents of officers in the British and United States Armies. Music Directors, based at the OKH, were regarded as staff officers, while the Bandmasters supervised infantry, light infantry, cavalry, artillery regimental and engineer battalion bands.

NCOs were divided into three groups. Technical NCOs, established 23 September 1937, for senior instructors in the Fortress Engineers and later the Veterinäry Corps; Senior NCOs, called 'sword-knot NCOs'; and Junior NCOs, or 'NCOs without the sword-knot'. The Stabsfeldwebel rank, introduced 14 September 1938 for NCOs re-enlisting after 12 years service, was initially held by First World War veterans. Hauptfeldwebel was not a rank, but an appointment, introduced 28 September 1938. He was the senior NCO in a company based at the company HQ and nicknamed der Spieβ - 'the spear'. Usually an Oberfeldwebel, he outranked a Stabsfeldwebel (who could also be promoted to this appointment). Other NCOs receiving this appointment were designated Hauptfeldwebeldiensttuer (acting CSMs), but usually received rapid promotion to Oberfeldwebel.

The rank-class of 'Men' included all privates and lance-corporals, the latter, as experienced privates, constituting a larger proportion of this rank class than would be found in other armies.

Most ranks had alternative rank titles. Some, as in the Medical Corps, differentiated specialist officers without the power of field command. Others, such as Rittmeister or Oberjäger, preserved traditional titles.

Almost all officers held substantive ranks - the British system of acting ranks did not exist - so that German officers and NCOs often held higher commands than their British equivalent. It was therefore not uncommon for a Leutnant to be a company commander. While the first platoon of a typical rifle company was under a second leutnant, the second and third were often commanded by an Oberfeldwebel or Feldwebel. Promotions to the infantry ranks of Unteroffizier, Feldwebel and Oberfeldwebel depended on a unit's table of organisation, and were the normal progression for a capable NCO. All other NCO and lower ranks were awarded on seniority. The rank of Obersoldat was held by a soldier lacking even the qualities for promotion to Gefreiter, while a Stabsgefreiter was an 'old sweat' unfitted for NCO rank. The ranks of officer candidates will be covered in Volume 2. 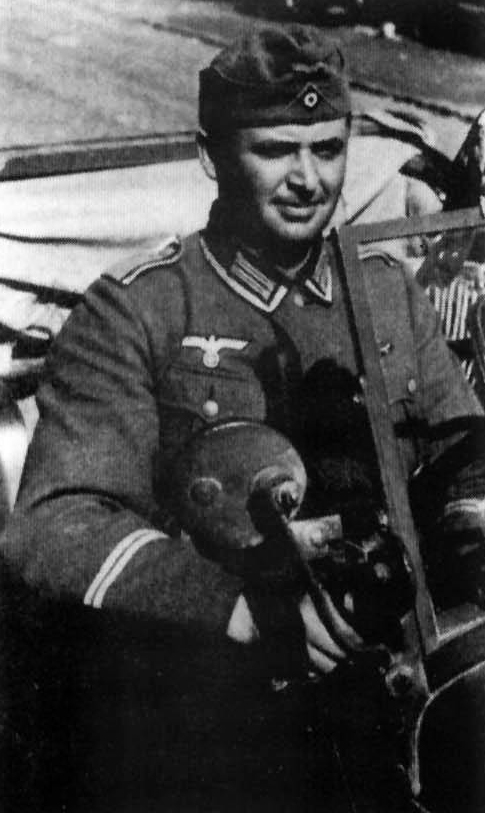 France, June 1940. A Hauptfeldwebel in service uniform, displaying the double cuff braids and report book of his appointment. He has reversed his shoulder-straps to conceal his unit insignia. Note his Wehrmacht long-service ribbon. His relaxed attitude and lack of equipment suggest that the Battle of France is over. (Friedrich Herrmann)