Flying at three times the speed of sound at a 15-mile altitude to deliver a nuclear attack was the role of the XB-70 Valkyrie. This massive delta with six enormous engines would have been uncatchable, and it worried Soviet generals. But the cost of the project spiralled, and problems culminated in a disastrous crash during flight trials. And then surface-to-air missile developments made the XB-70 obsolete at a stroke. 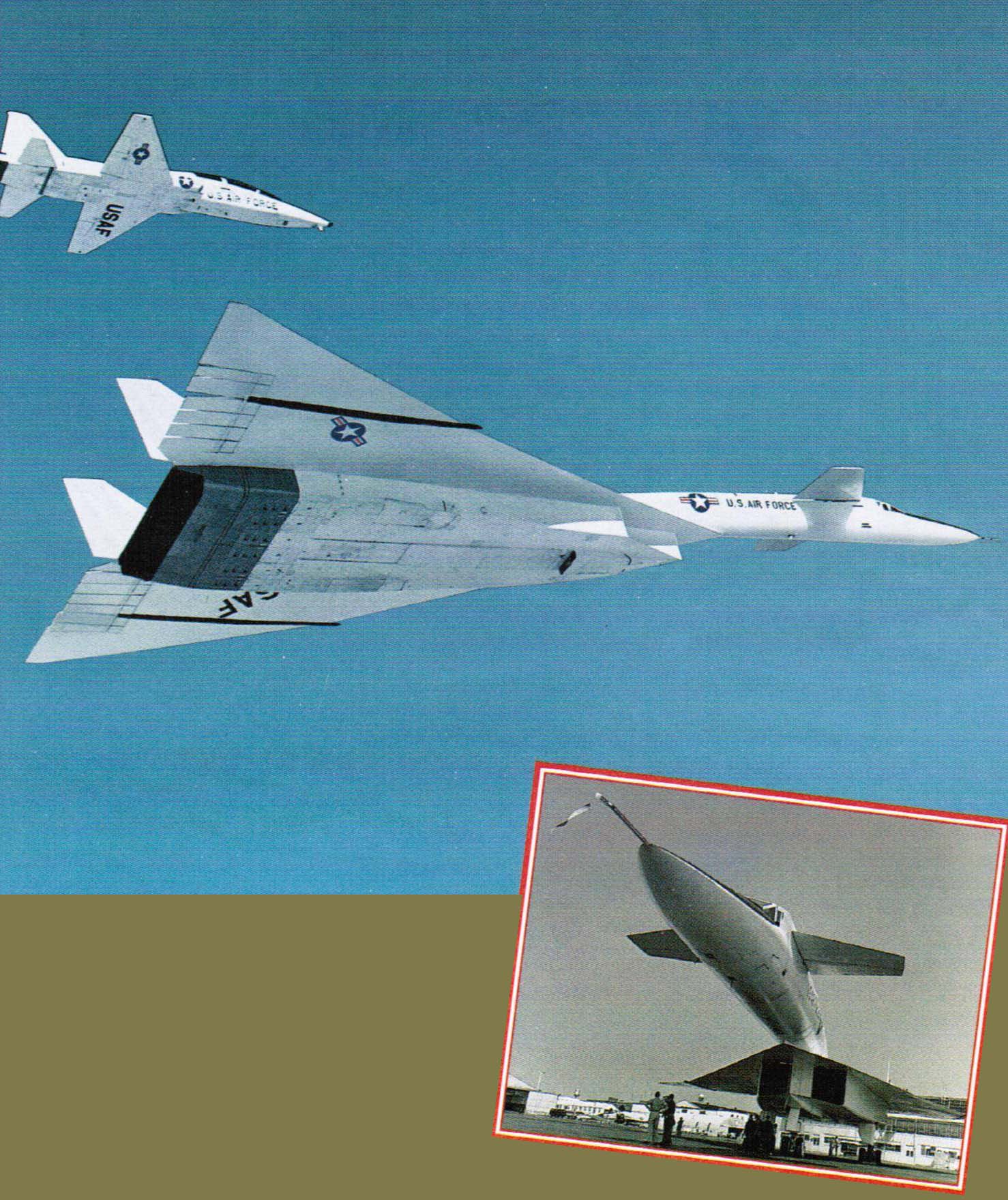 The XB-70 was the ultimate high- altitude bomber, with a performance that has never been matched. But it was a dead end; the future of the bomber lay in stealthiness and low-level penetration.

Even today, no aircraft can match the staggering performance of the XB-70 Valkyrie. The aim of the aircraft was to fly so fast and high that interception was impossible and nuclear strikes on the Soviet Union could be threatened. In order to evade the latest Mach 2 Soviet fighters. North American designed the huge bomber to cruise at Mach 3 for long distances at extreme altitude. The result was a six-engine delta that burned special fuel, and had wingtips that folded in flight. The machine had to be built from special materials to cope with the heat stress of high-speed (light. The prototype first flew in 1964, and a second aircraft began trials the following year. At first all went well, and the XB-70 demonstrated that it could do everything promised by the makers, including flying at around 2,0(M) m.p.h.

Tragedy struck during a test flight in June 1966. A Lockheed 1-104 Starfighter in formation with the XI5-70 for a photo shoot accidentally crashed into the Valkyrie, and both aircraft were destroyed. Only one of the Valkyrie crew ejected.

There was a political storm about the incident and the Valkyrie was cancelled, partly because new Soviet air defense missiles had, by the mid-1960s, made high-level bombers a thing of the past.

The Valkyrie was a stunning piece of engineering, but the cost of the Vietnam War made it hard to justify spending more money on it. 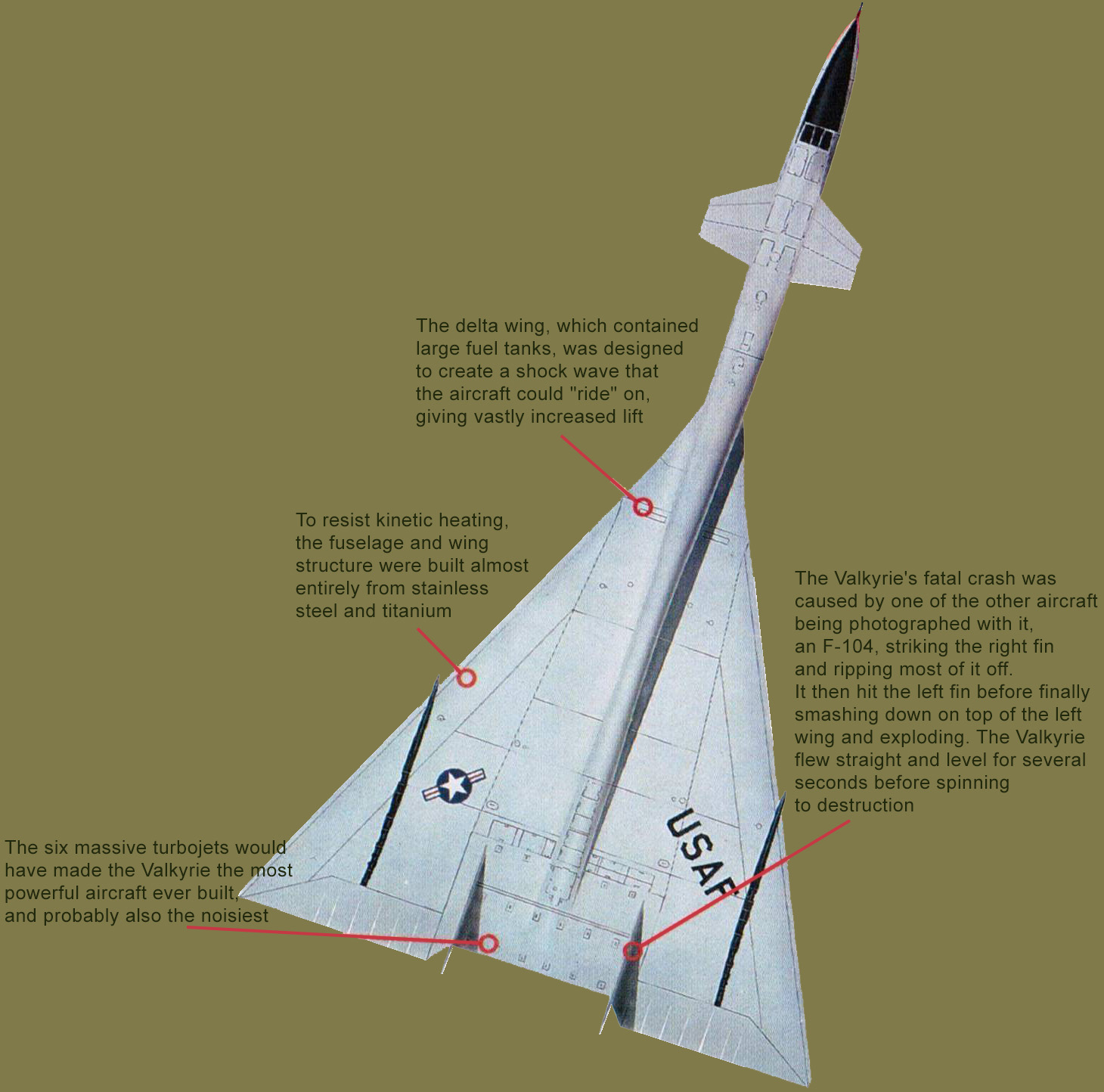 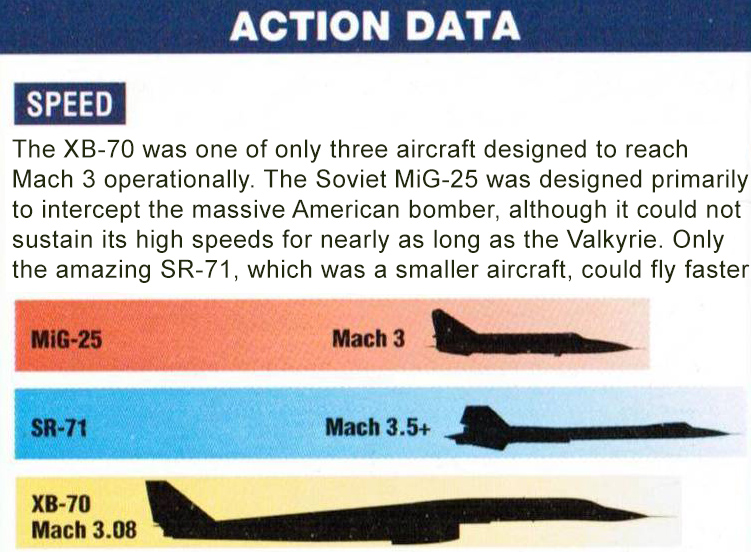 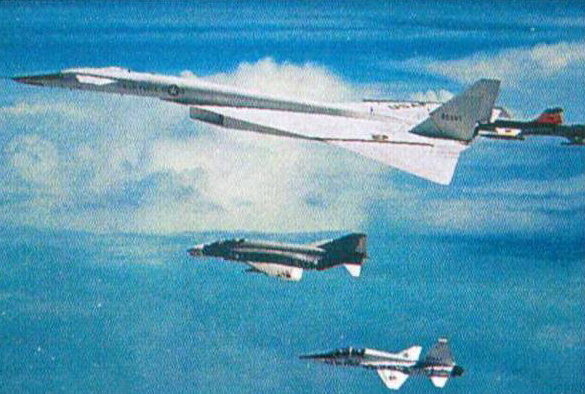 Five aircraft powered by General Electric engines were flying in formation for a publicity shot when a NASA F-104, piloted by Joe Walker, strayed too close to the massive vortex generated by the Valkyrie's downtumed wingtip, sucking it in. 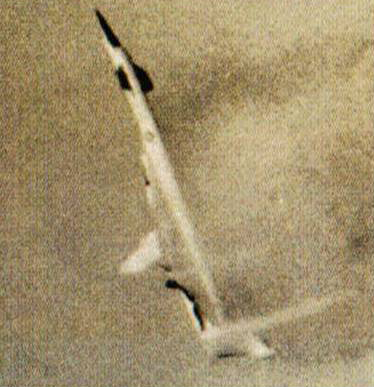 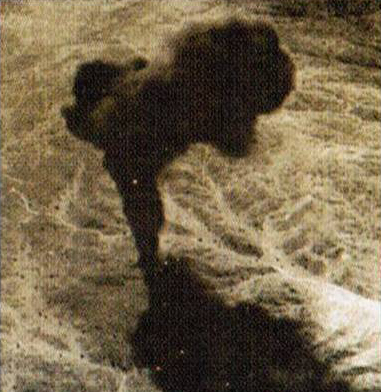 TRAGEDY: The tiny F-104 was hurled across the XB-70's wing, smashing one tailfin and then exploding. The Valkyrie flew on for several seconds before tumbling out of control and crashing into the Mojave desert miles below.

No one knows why F-104 chase pilot Joe Walker collided with the XB-70, but it is thought the crash was caused by the F-104 getting caught in the huge tip vortices generated by the large delta wings.

A combination of the large canard foreplanes and trailing-edge elevons controlled pitch. The four-man crew sat in a special ejection capsule, which was the only way to survive an ejection at the heights the Valkyrie flew. 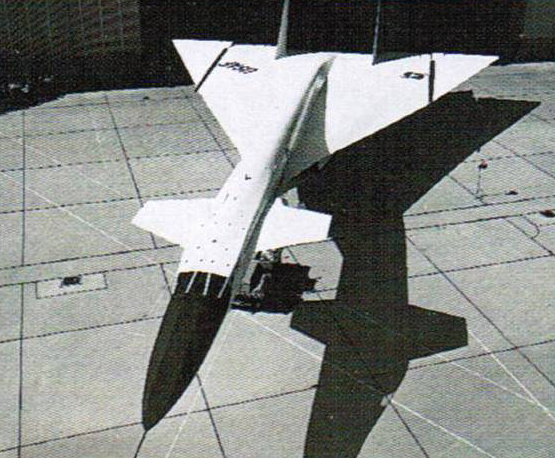 Like the YF-12A and the MiG-25, the XB-70 needed a very thin delta wing with large twin tailfins for stability in Mach 3 flight.

Stealth was the last thing the XB-70's designers had in mind. Both its radar and infrared signatures were immense.

The surviving Valkyrie made its last flight in February 1969 to the USAF museum, where it remains on display to this day.

▶ The Valkyrie was used for "sonic boom" trials flights in support of the aborted U.S. Supersonic Transport (SST) project.

▶ Ethyl borane was planned to fuel the XB-70, but was found to be too expensive.

▶ Colonel Joe Cotton described flying the XB-70 as "like driving a Greyhound bus around the racetrack at Indianapolis."

▶ The folding wingtips were designed to use aerodynamic "shock wave" effects.

It is one of the most beautiful aircraft ever built, still capable of turning heads after a quarter of a century. But the Anglo-French Concorde is much more than a work of aeronautic art. A record-breaker from the start, it remains a supremely efficient supersonic aircraft that has proved to be highly profitable on the prestigious air routes between Europe and the United States. 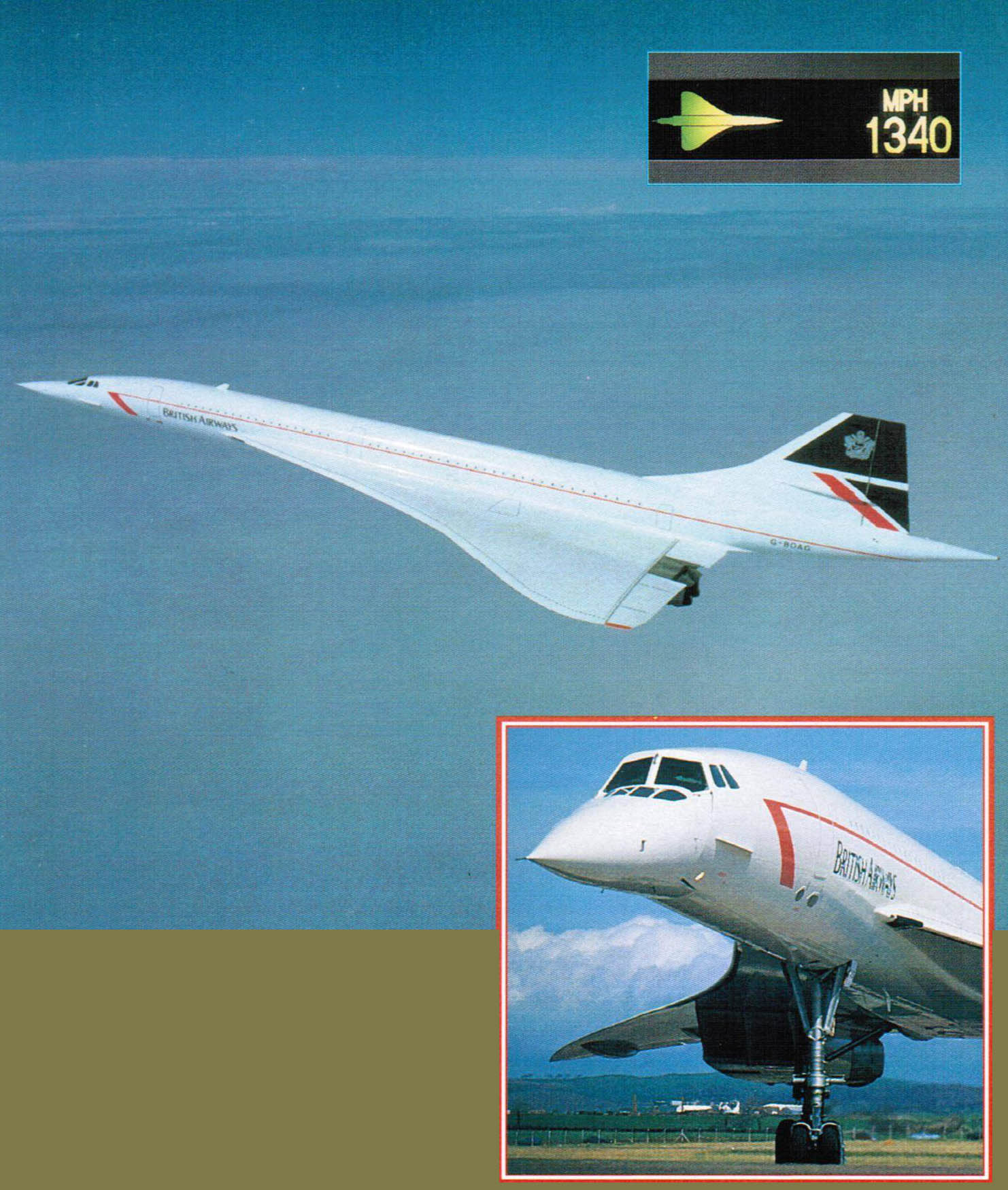 Although it is a product of 1960s technology without the benefit of multi-screen cockpits and fly-by-wire controls, the Concorde is still the most futuristic airliner to be seen anywhere in the world.

Mach 2 across the Atlantic

Over the last two decades a handful of Concordes have carried more people beyond the speed of sound than all the other supersonic aircraft ever built.

Since its commercial debut in 1976, Concorde has proved deservedly popular. It is the only way a business executive can cross the Atlantic for a meeting and return the same day. A subsonic competitor faces at the very least two six-hour flights and serious jet lag. As a result, Concorde flights are nearly always filled with high-paying passengers.

Yet there is a flip side to Concorde's success. When it entered service the oil crisis had made the viability of a gas- guzzling supersonic jet questionable, and influential American environmentalists were loud in their protests over the noise its powerful engines generated. As a result, options on 70 aircraft by more than a dozen airlines were cancelled.

Nevertheless, the 14 production aircraft delivered to the national carriers in Britain and France have performed splendidly, with higher than average mechanical reliability. They are the world's only operational supersonic airliners and will remain so until well into the 21st century. 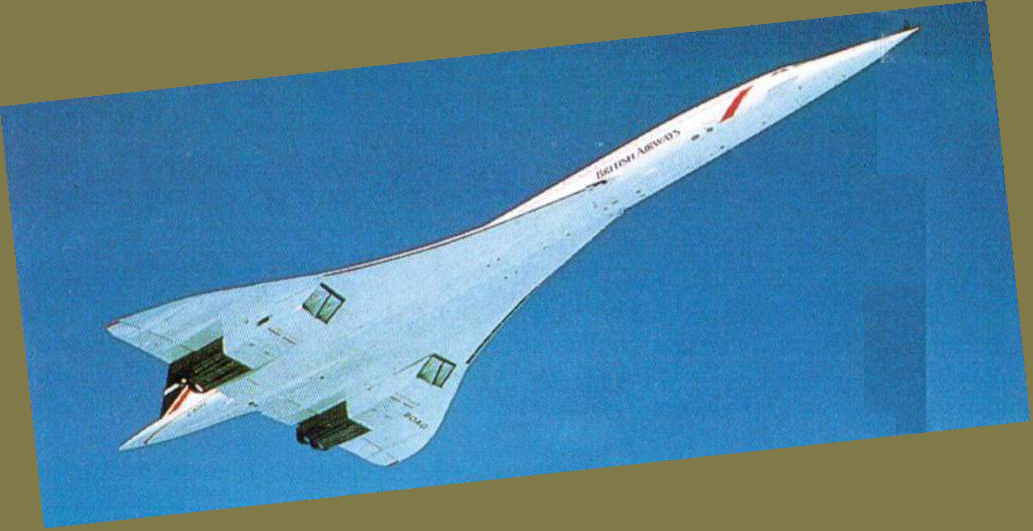 Concorde in flight could never be confused with any other aircraft currently in service. The graceful, arrow-like layout, the slender nose and unique, curved double-delta wing are instant recognition features.

G-BOAA was the sixth production Concorde. It entered service with British Airways on January 21, 1976. 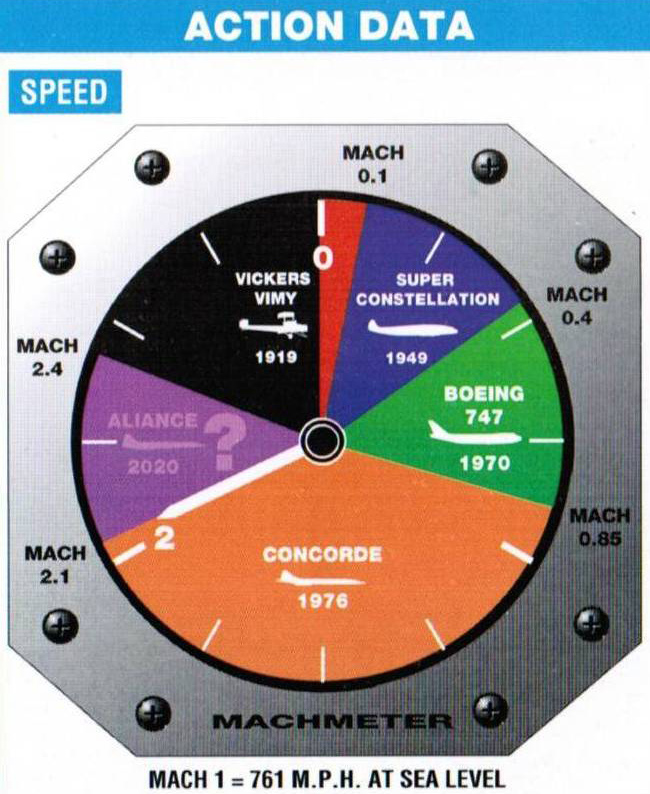 Alcock and Brown first crossed the Atlantic nonstop in 1919. Their Vickers Vimy could not exceed 90 m.p.h. Thirty years later, the great piston-engine airliners were crossing in 14 hours. The coming of the jet age increased speed once again. Less than 50 years after that first flight, Concorde has cut the crossing to three and a half hours. But we will have to wait until well into the 21st century to see any advance on that. 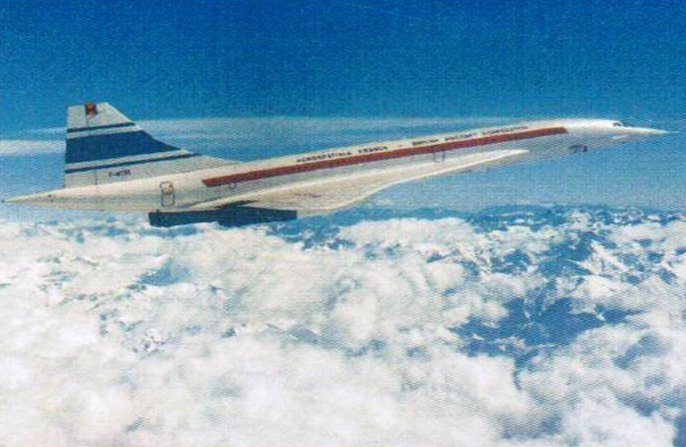 Concorde is one of the very few aircraft able to maintain a supersonic cruise without the use of afterburners, which enables it to fly farther at Mach 2 than any other aircraft.

Even at rarified altitudes above 49,000 feet, air friction at twice the speed of sound is a significant factor, so Concorde is polished mirror smooth to reduce drag. 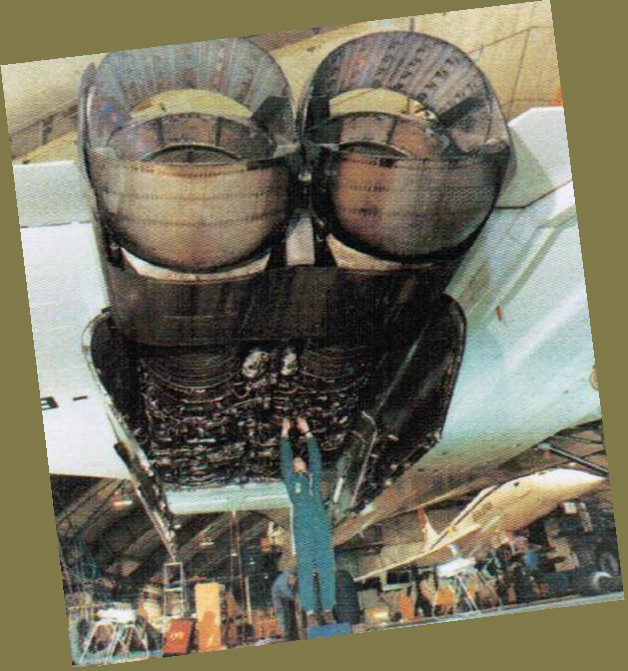 Concorde's engines each pour out more than 18.7 tons of thrust. 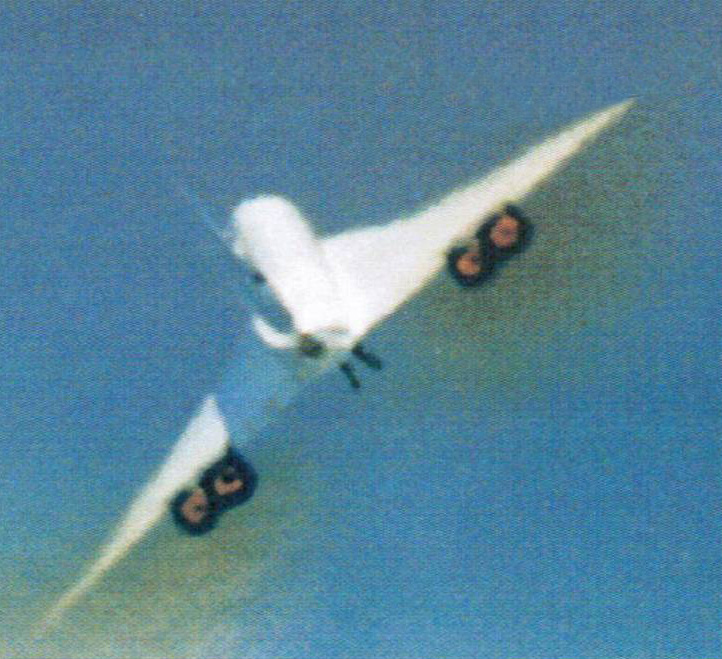 To gain additional thrust at critical moments such as takeoff and transition to supersonic speed, Concorde's engines are fitted with afterburners. 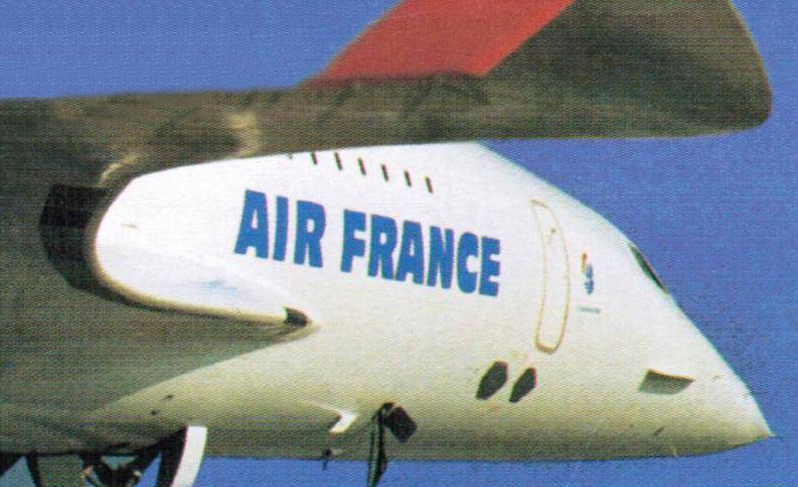 Concorde's aesthetically pleasing shape is matched by a standard of service more luxurious than that of any other scheduled airliner.

▶ Concorde's only rival, the Soviet Tu-144, is no longer in service.

▶ During supersonic flight, Concorde's skin heats to 260° F at the nose.

▶ As fuel is burned off during a flight, Concorde rises an additional 9,850 feet.

▶ Concorde flies 10 miles in the time it takes to fill a passenger's champagne glass.

▶ The 14 Concordes have clocked more supersonic hours than all the fighters used by the world's air forces.