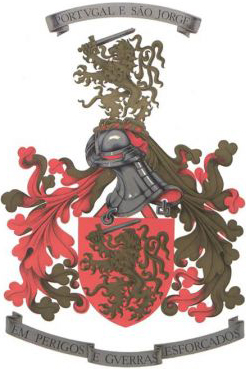 The Portuguese Army (Portuguese: Exército Português) is the land component of the Armed Forces of Portugal and is also its largest branch. It is charged with the defence of Portugal, in co-operation with other branches of the Armed Forces. With its origins going back to the 12th century, it can be considered one of the oldest active armies in the world. 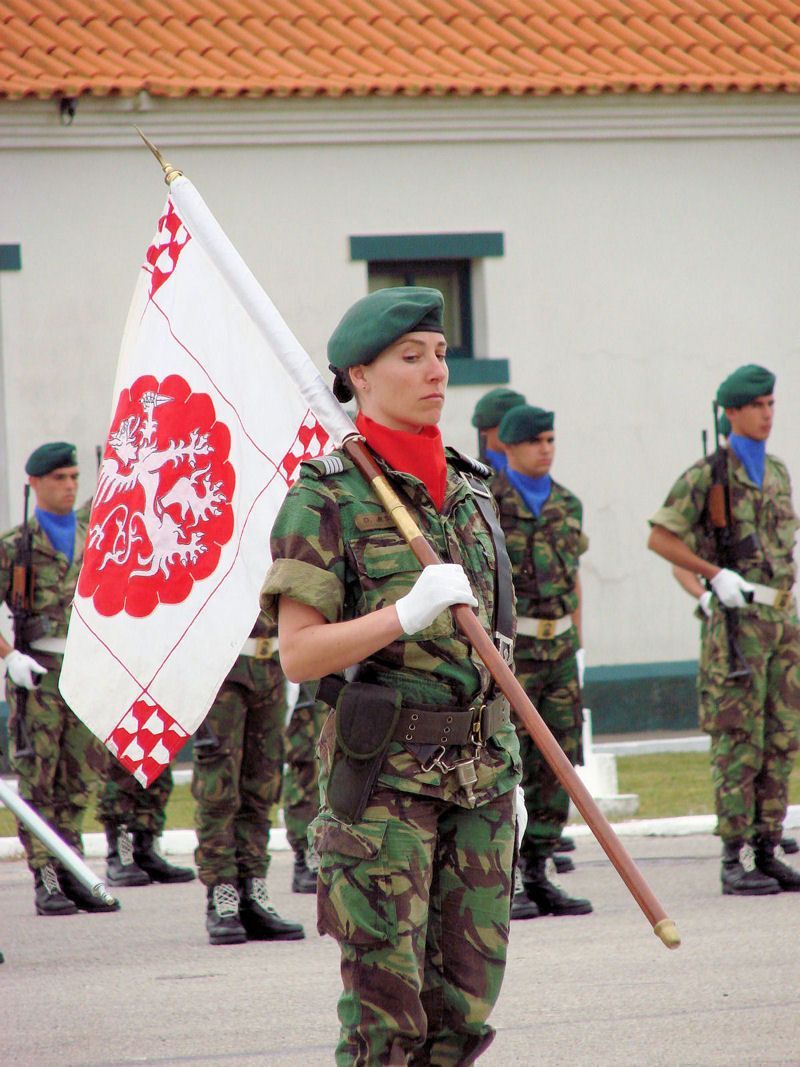 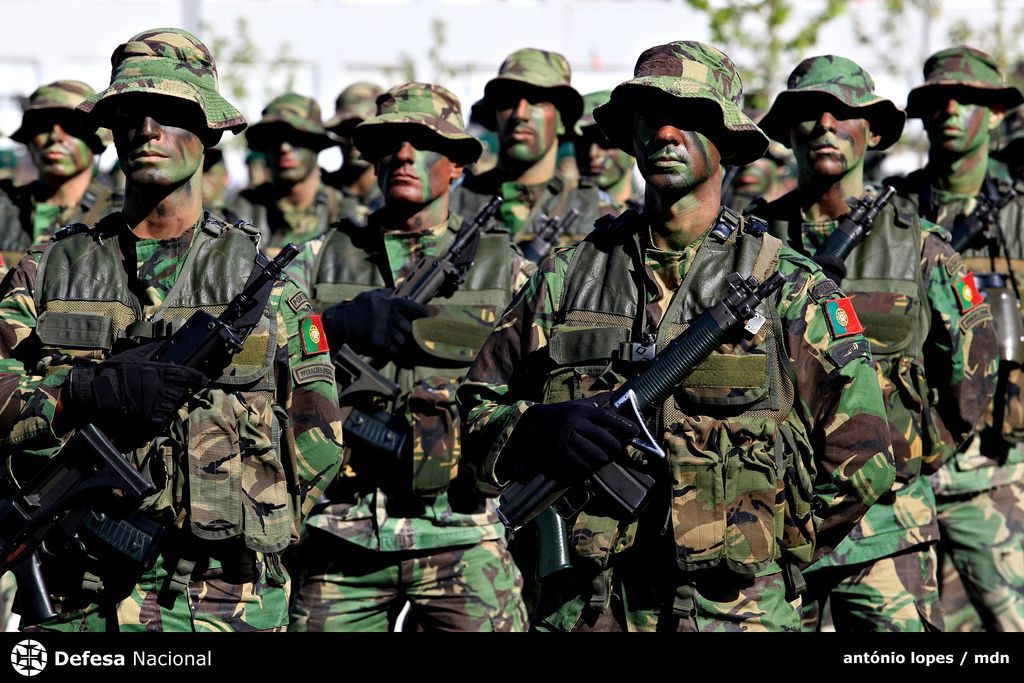 Presently, the Portuguese Army is an entirely professional force made of career personnel (officers and NCOs) and of volunteer personnel (officers, NCOs and enlisted ranks). Until the early 1990s, conscripts constituted the bulk of the Army personnel, with a cadre of career officers and NCOs responsible for their training. Conscription was however gradually reduced since the middle 1990s, until being finally formally abolished in 2004. 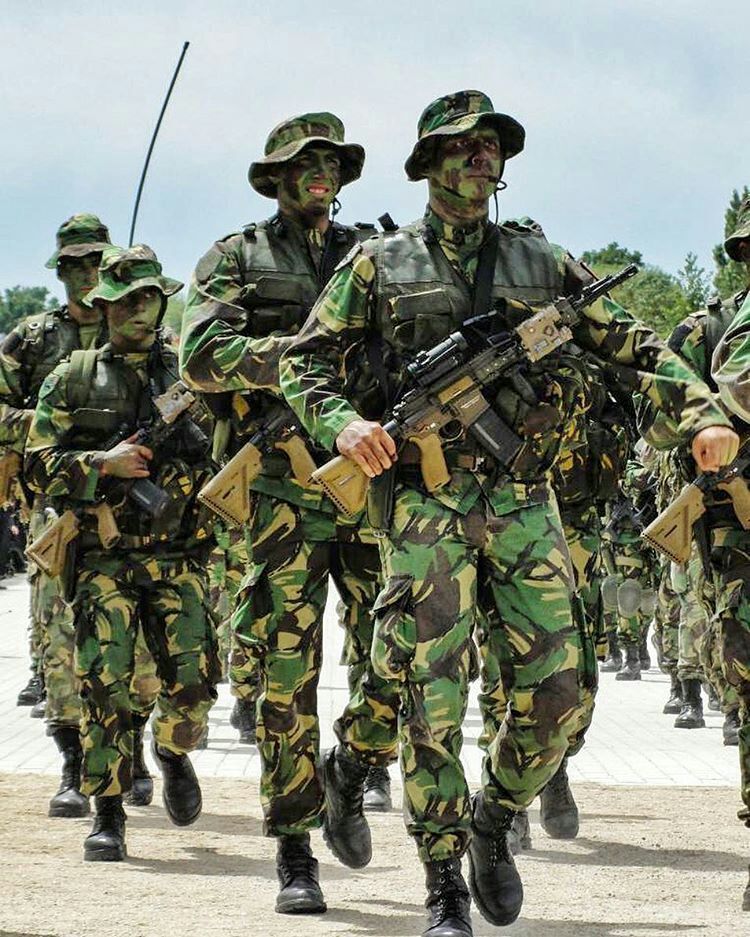 The Portuguese Army boots are the part of № 3 Uniform (Combat dress uniform).

It is clearly seen from their name, he Portuguese army high-laced boots of the model m/964 (M/64) (Photo 5) were introduced in the year 1964 and they used to be in the African Overseas wars.

These boots look similar to the same period Belgian army boots, which are one of the most long-lasting and simple by design. They feature robust glued and stitched out-soles made of hard vulcanized rubber, durable but soft grain leather, easy lacing make these "ankle boots" very recognizable.

The boot's tongues are stitched to about the middle of the lacing system (semi-closed flap) - this helps to protect the feet from ingress of water up to that level (Photo 6). The leather is thick, but very elastic, the grainy structure provides some cushioning to protect from minor injuries. The marking on the boot’s tongue shows the service information (contract number), the year of manufacturing (the last two numbers) and the size in the European system after slash. 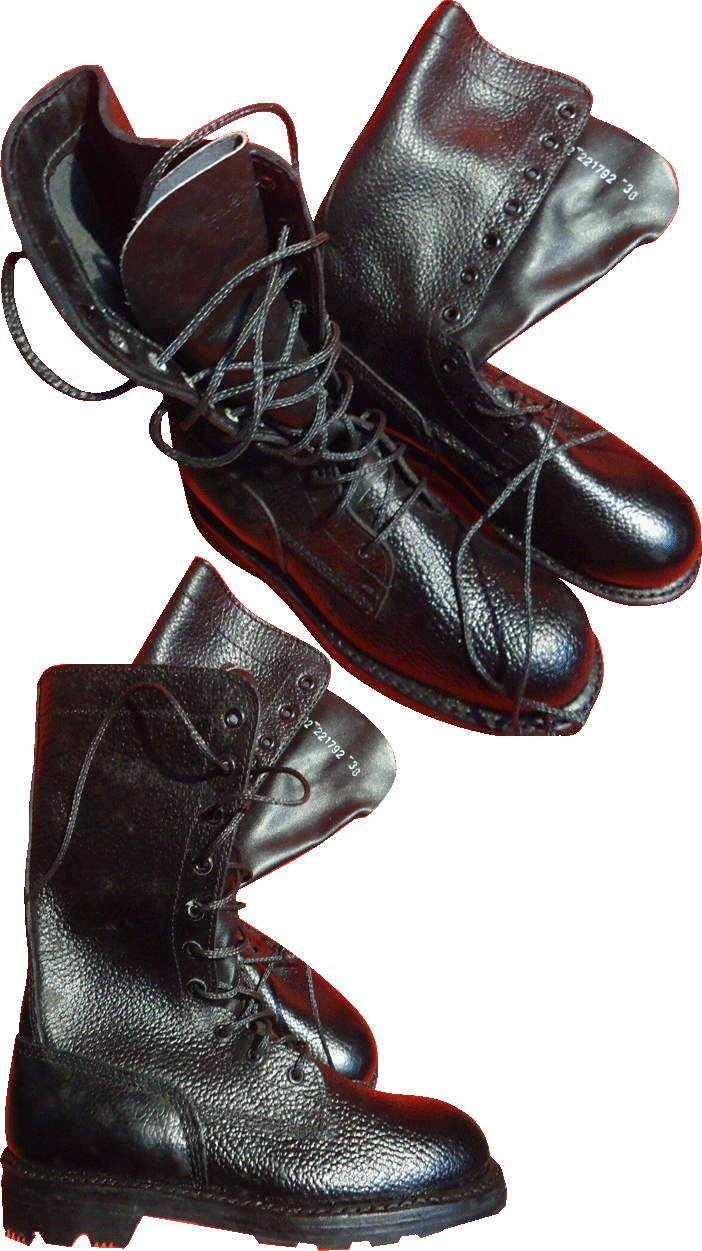 The out-soles of hard durable vulcanized rubber show the the manufacturer's name - "OGFE" ("Oficinas Gerais de Fardamento e Equipamento" = "General Uniform and Equipment Workshops"), a Portuguese State Company, which is manufacturing boots, clothes and different equipment for the Portuguese Armed Forces. The sole was attached by glueing and stitching method. The out-sole tread pattern was shifted closer to the centre of the sole on the distance about an inch, and the resulting free space on the welt was stitched.

The m/964 boots out-sole trad pattern is of unique Portuguese design and is easily recognizable (Photo 8). The boots feature 3 (in lower part of the lacing) + 7 (in the upper part) pairs of simple round lacing eyelets. There is an additional piece of soft leather padding along the upper inner parts of the of the boot's top for better fit.

The Portuguese combat boots model m/967 were introduced along the Portuguese Marines disembark (landing) boots in the same year (Photo 9). 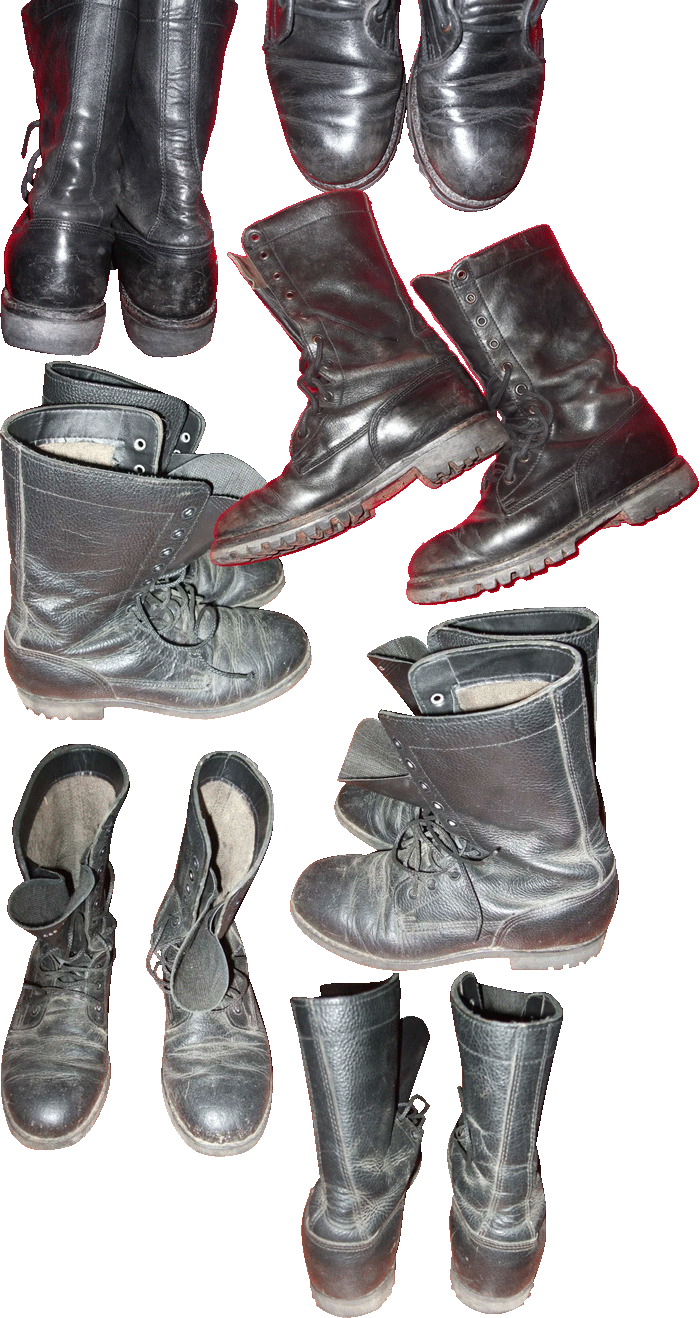 These boots had minor differences with the previous model, they featured new out-sole tread pattern - classic "Vibram" pattern (lateral stripes on the welt and cross tabs, staggered in the middle of the sole and heel, the boot’s tongue was stitched to the higher level and smooth leather was also used along with the "grainy" cowhide leather. 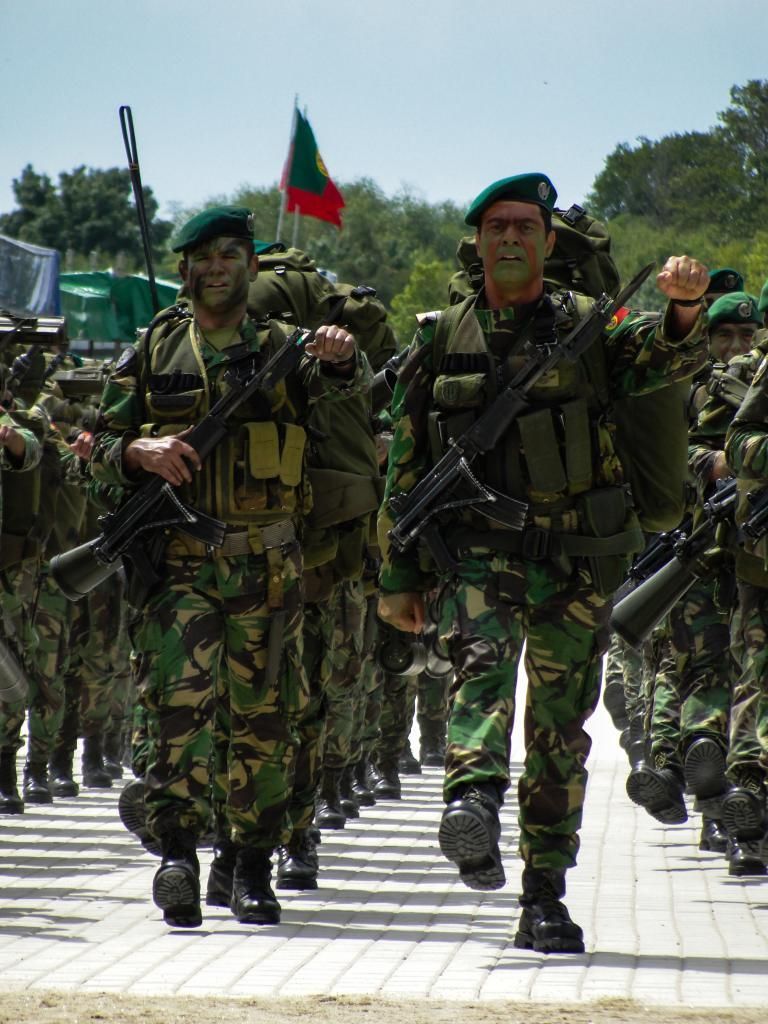 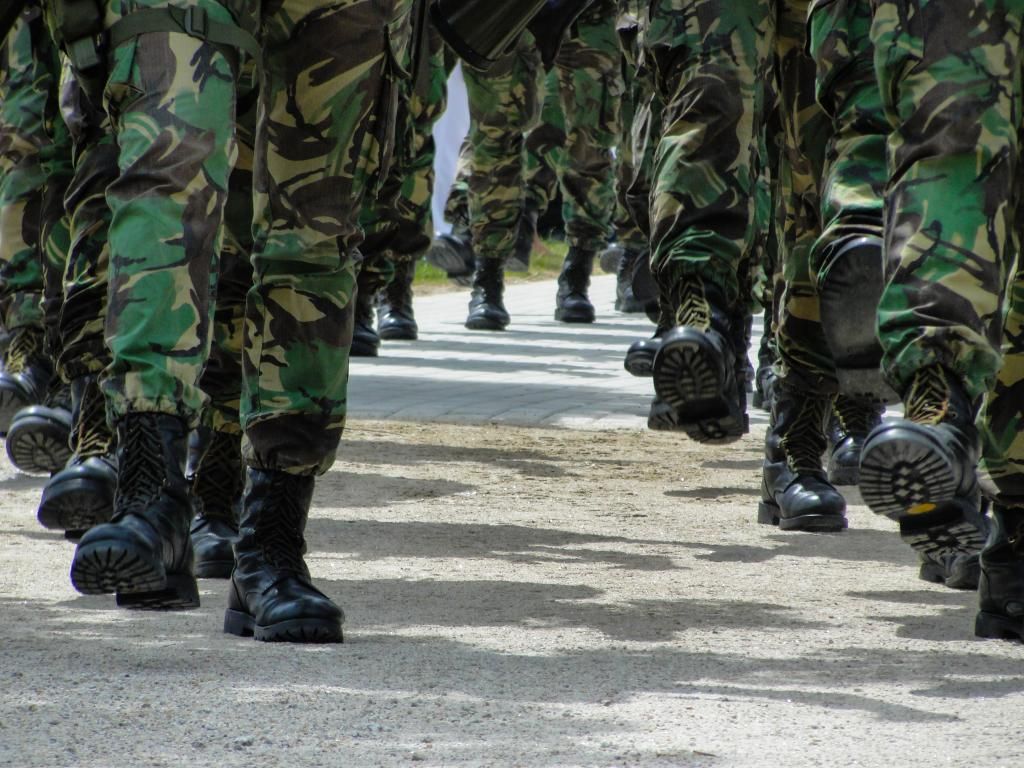 The end of the Cold War and the consequent reduction of the threat of a conventional warfare in Europe brought the refocus of the Portuguese Army. From the beginning of the 1990s, the Army started a process of deep transformation, evolving from a mainly conscript army organized as skeleton structure oriented to support the raising of operational units through mobilization to a much smaller professional army organized with permanent operational units. In Portugal this change implied a rationalization of the forces that included the deep reduction of personnel, the disbandment of a number of regiments and bodies (including the Commando Regiment) and the transference of the Parachute Troops from the Air Force to the Army. 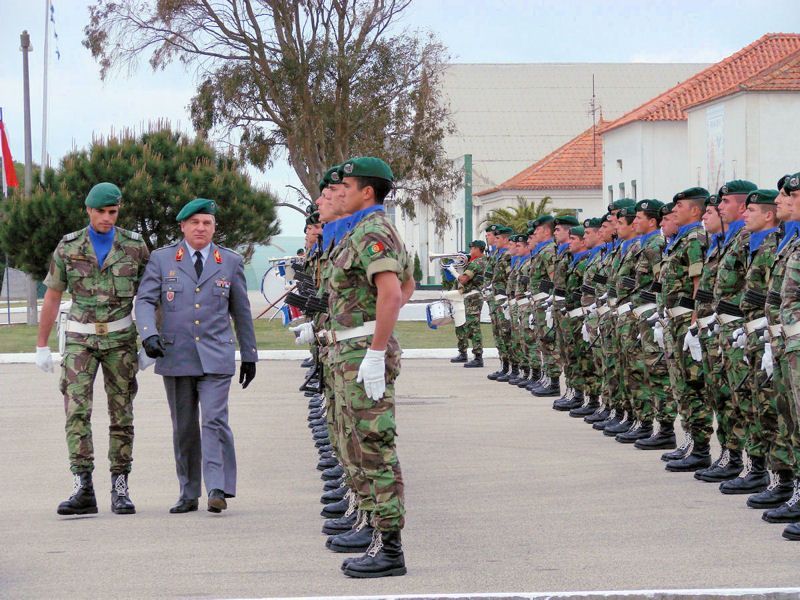 The Portuguese Paratrooper’s boots can also be characterized by simple design and reliability, high maintainability and flexibility, quality and durability.

The toe and the counter of these boots are reinforced with additional layers of the leather, the top is made of thick but flexible cowhide leather with hydrophobic impregnation. The boots feature 3 (in lower part of the lacing) + 9 (in the upper part) pairs of simple round lacing eyelets. 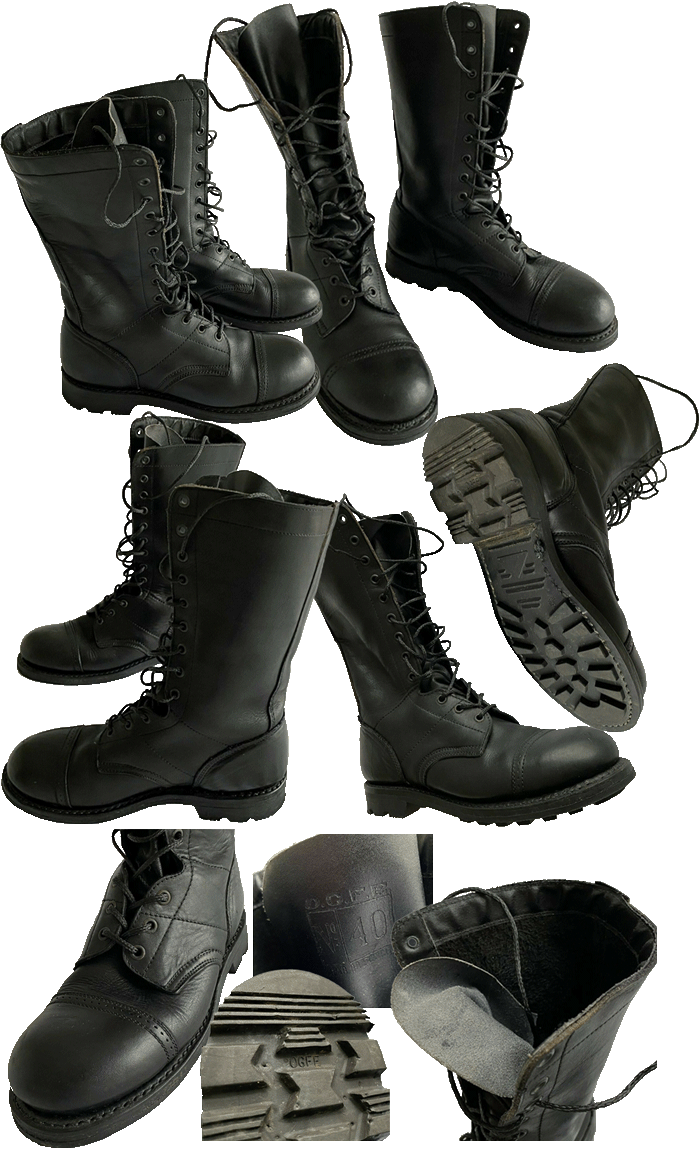 These boots are manufactured by "OGFE", as it is indicated on the boot’s tongue and the out-sole. The out-sole itself and the heels of these boots are of different tread pattern – such things used to happen after the boots resoling, when the available spare parts (the out-soles and the heels) were used (Photo 12).

It is easy to mention that the Portuguese jump boot’s were created under the influence of the US Paratrooper’s "Corcoran" boots design of the early model. In August of 1942 those American tall laced "Boots, Jumper, Parachute" (with 11 to 13 pairs of lacing eyes depending on the foot size) were standardized. The heel and sole were made of rubber with the leading edge of the heel slanted to avoid a snag point for lines or to catch on the lip of the aircraft door. Those boots used to be called "Corcorans" after their first contractor - "Corcoran's Company of Stoughton, MA", though they were made by several different companies for both government and private sales.

The tongue of that boots, under the laces, was in the form of a gusset and formed part of the uppers. The jump boots also had a capped "bubble" toe, and diagonal stitching across the instep (the external vestige of a webbing reinforcement strap on the inside). They were originally issued with standard brown laces but those were replaced by leather thongs, measuring 70 inches in length. Those jump boots were available in more than 110 different sizes!

In the 1940-s, as well as in our days, the jump boots were very popular with the Airborne units, providing a strong, military look, representing by themselves the symbols of the paratrooper’s elite status. The boots did as much for paratrooper morale as they did for their feet. The Airborne troops preferred to tuck their trousers into their boot tops to show the maximum boot, more for appearance than for any other reason.

An improved version of the Portuguese Paratrooper’s boots can be seen on the pictures below (Photo 13). 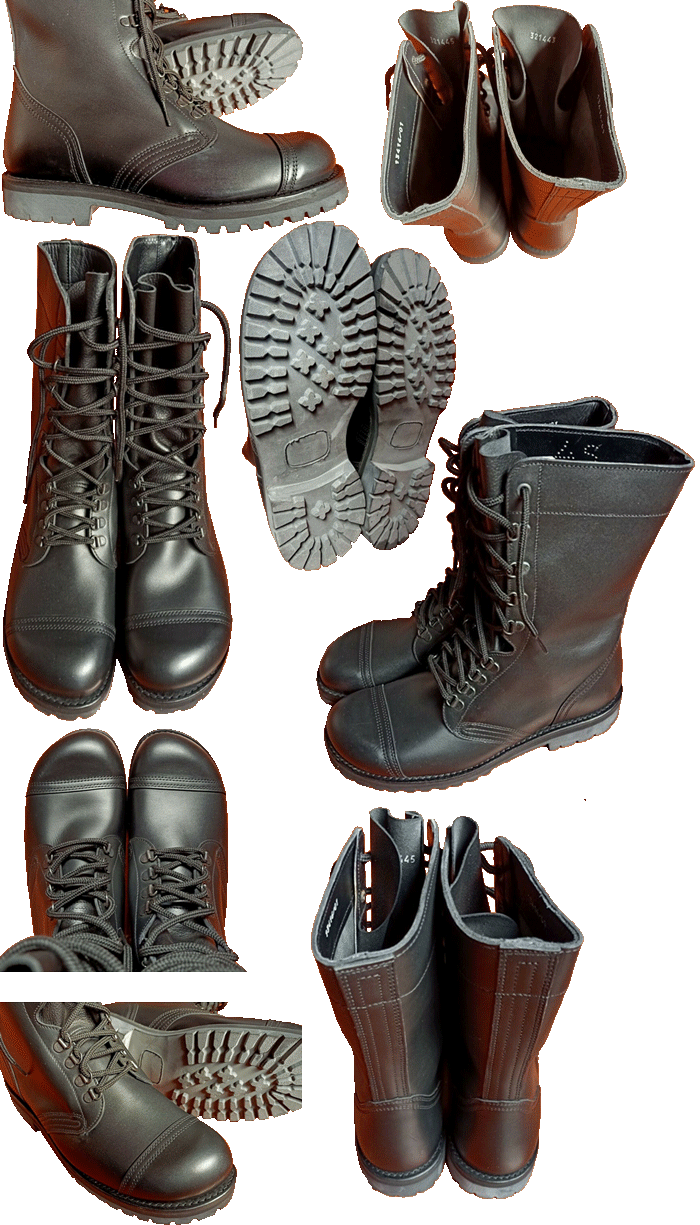 The toe cap and the counter of these boots are reinforced with additional layers of the leather, the "speed-lacing" system consists of 4 "D"-shaped rings in the lower and the upper parts of the lacing + a pair of simple round lacing eyelets on the top of the lacing. The new model lacks the diagonal stitching across the instep, but features the improved 2-layer out-sole with classic "Vibram Carrarmato" tread pattern (Photo 13).

If not to count the lacing, these boots look very similar to the Danish M/58 combat boots.

However, the Portuguese used to manufacture those boots with simple round eyelets as well:

The model shown (Photo 14) above features leather loop on the rear top side of the boots to make pulling on the boots easier. The tongue is one-layered (in some pairs it is made of leather, on the others – of artificial leather), and no additional padding inside the boots or tongues is provided.

Another version of the lacing system is shown below. These boots featured three pairs of eyelets at the foot, subdivided by a dent-shaped cutout and five pairs of "D"-shaped rings + a pair of simple round eyelets in the upper part of lacing.

The lases are round-shaped in section and are made of reinforced double-layer nylon.

There is a wide variety of lacing systems seen on the Portuguese Paratroopers boots: all simple round eyelets, speed-lacing system of "D-shaped" rings, the mixture of these systems and even the hooks on the upper part of the lacing: 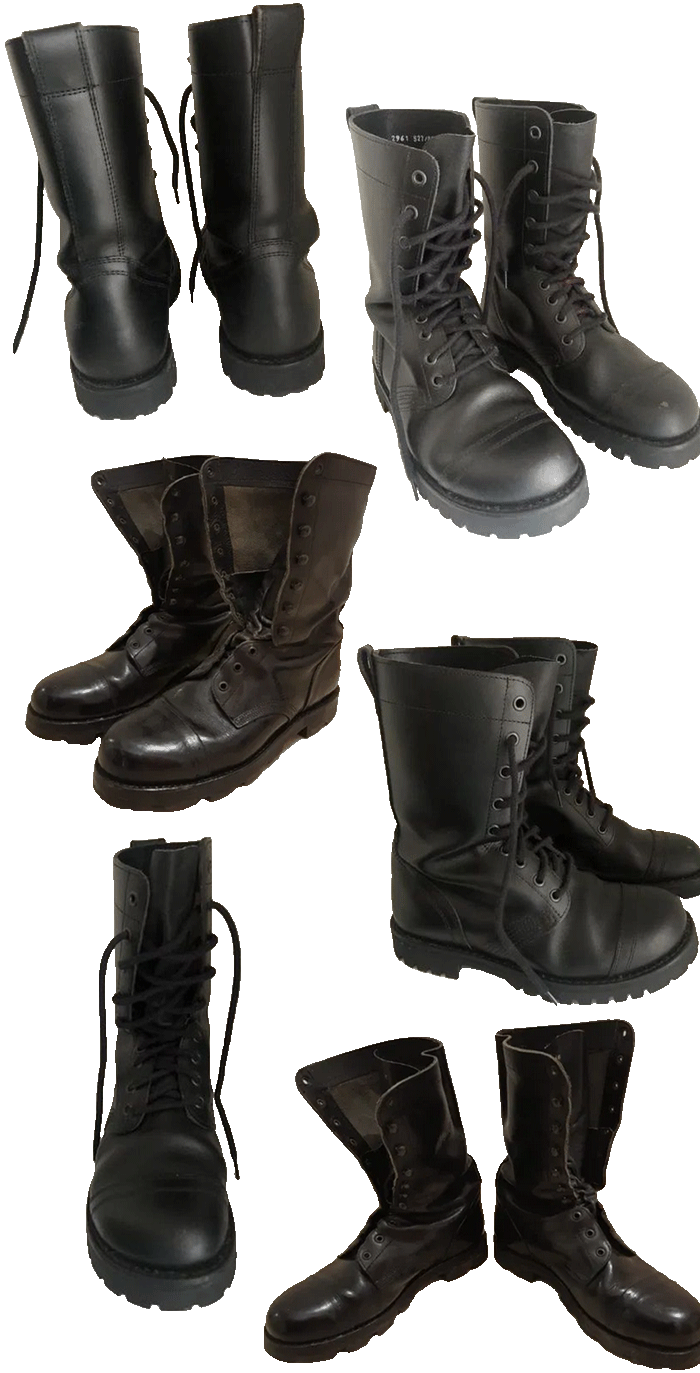 Some Portuguese combat boots features the general outlook appearance and the out-sole tread patterns of the armed forces of other countries, for example, the Netherlands and France.

One can see the similarity of the Dutch boots out-soles – even with grooves on the heels and of the Portuguese ones (Photo 17):

On the pics below we can see the Portuguese boots (Photo 18) with the out-sole tread patterns, similar to those of the French BMJA-65 boots and South-African combat boots:

The combat boots with such out-soles can be clearly seen on the feet of the Portuguese paratroopers:

However, had the different boot’s top design, typical for the Portuguese army (the boot’s top is made of smooth cowhide leather, with additional layers of the reinforcing leather on the toes and the counters of these boots – the patches on them could be different in shape and the stitching could be different as well). The lacing system consisted of 10-12 simple round eyelets, depending on the foot size (Photo 20): 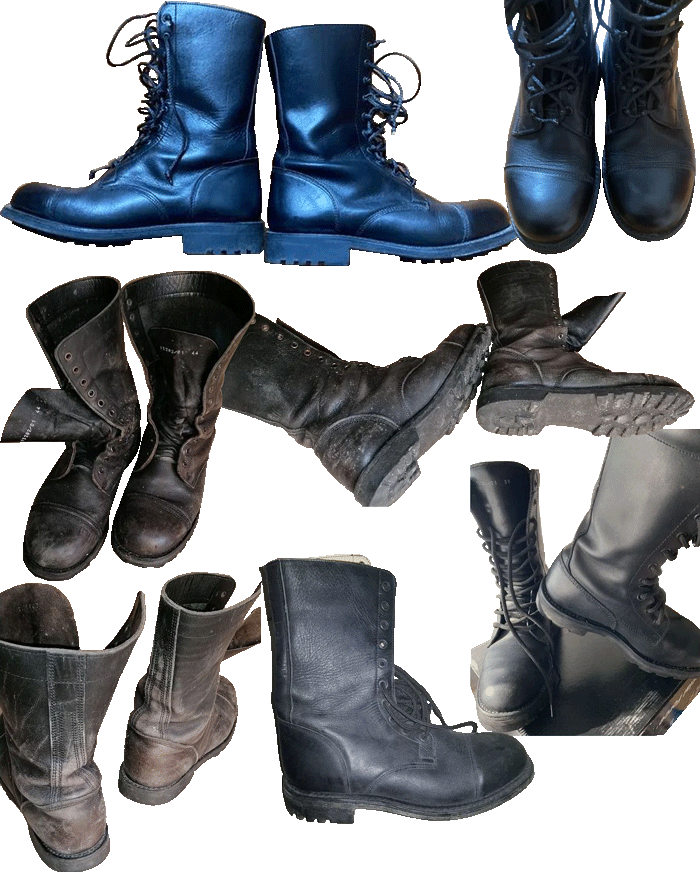 The marking on the boot’s tongue shows the service information (contract number), the year of manufacturing (the last two numbers) and the size in the European foot size system (Photo 21).

The boots’s tongue is stitched to the upper approximately on the mid level of the lacing system. 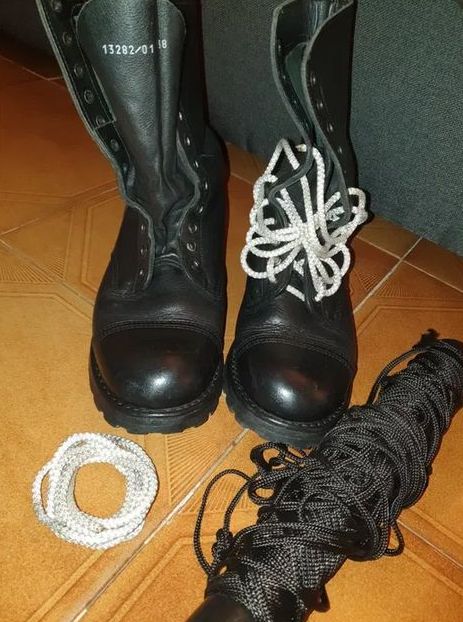 A cushioning and an additional layer of light-yellow "glove"-type leather were added inside some boots, though the some other boots featured no soft padding (Photo 23): 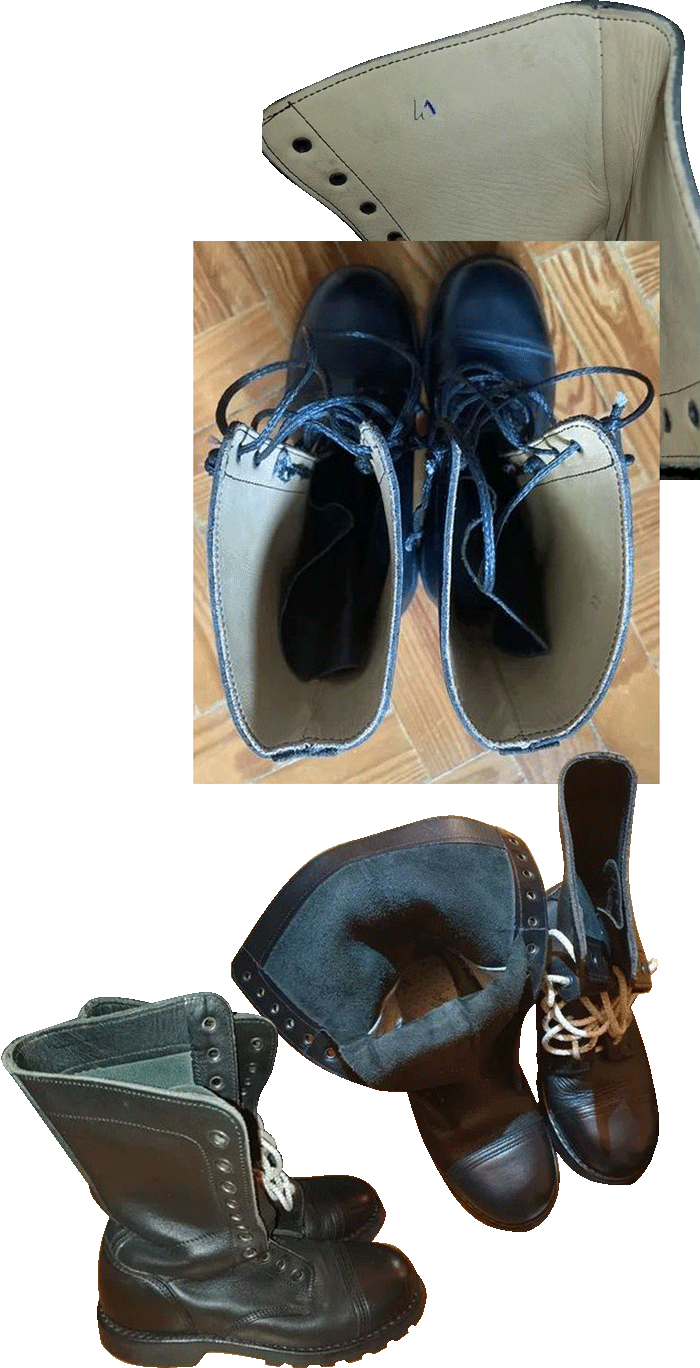 An interesting peculiarity of the Portuguese Paratrooper’s uniform – coloured laces as a part of the uniform is also worth mentioning.

Specifically, it is the uniform that the Portuguese military used in official ceremonies (parades, official meetings, ceremonies, funerals, etc.). Of course, the paratroopers in such uniforms usually were the target of attention with their white gloves; shiny boots with white laces and colorful neckerchiefs (each company had a different colour).

Apart from official ceremonies, in their every day's activities, the Portuguese military widely used the strong cord laces of green and brownish-green colours, as shown on the pictures below (Photo 25):

The way of placing the boot laces (parachute laces), aims to provide greater flexibility in the boots especially so that the landing is made without causing damage to the feet / legs.