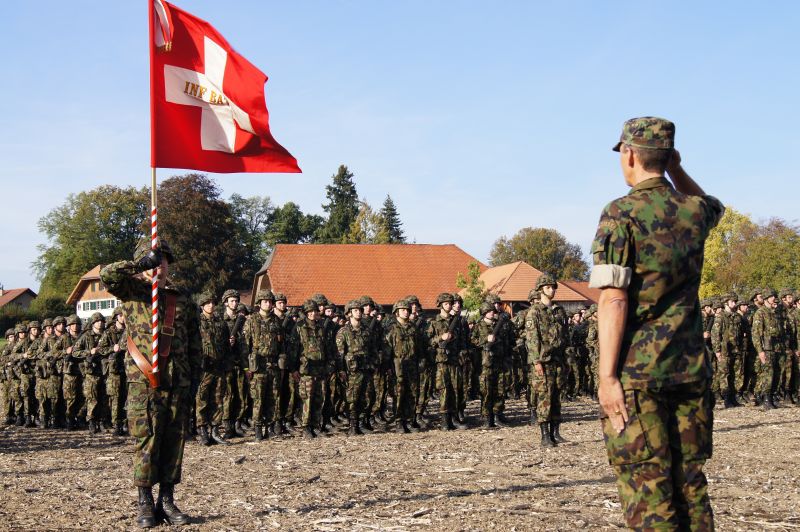 An interesting and distinctive country's defense system has historically been created in Switzerland. Formally, it was back in the era of the "Napoleonic wars", when the Swiss Army participated in armed conflict for the last time on the French side, during the famous "Battle of the Nations" at Leipzig (October 16-19, 1813). Despite the fact, that the neutrality and integrity of the country's borders were guaranteed by the Congress of Vienna (March 20, 1815), all these years Switzerland has been actively preparing for defense against any potential aggressor. 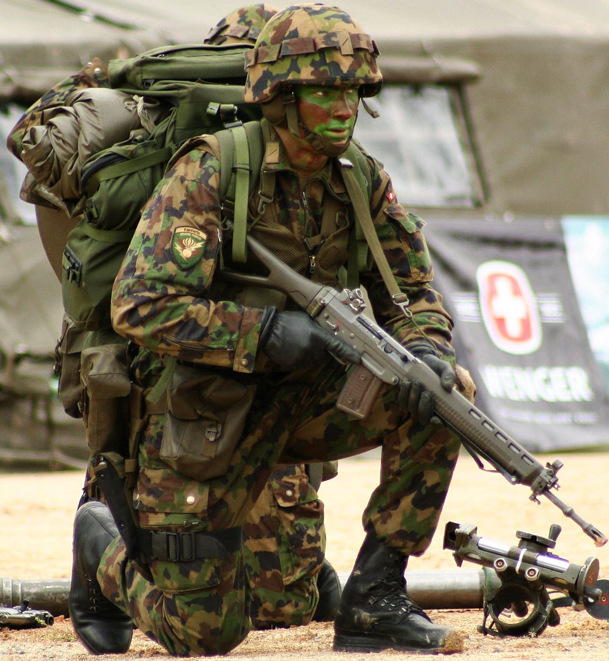 It is very possible that, in addition to financial and banking considerations "not to interfere the useful neutrals", this factor became crucial when the rulers of the III Reich decided not to attack Switzerland, as it was previously envisaged by the "Unternehmen "Tannenbaum" ( "Christmas tree") plan of military operation. This plan was developed by August 1940, and presupposed offense at Switzerland together with the forces of the fascist Italy.

The recruitment system of the Swiss Armed Forces (Schweizer Armee (German), Armée suisse (French), Esercito svizzero (Italian), Armada svizra (Rhaeto-Romanic)) is based on a "Militia principle), and only 5% of the personnel are professional military specialists at that. According to the country's laws, the Swiss citizens between of the ages from 18 to 21 years old are the conscripts, and the persons from 18 to 33 years old fit for military service. Women may serve on a voluntary basis (permitted since 2007). 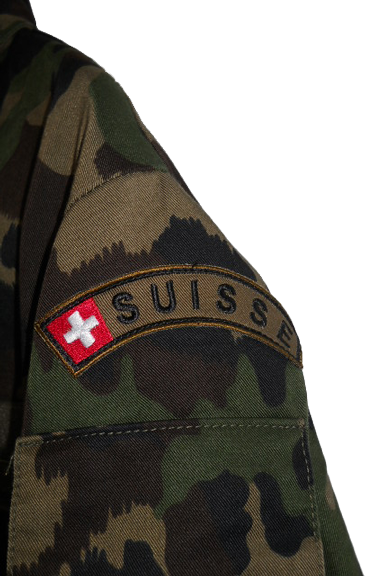 As a rule, about 60% of conscripts fit for military service after passing medical examination. Usually, about a half of those who failed to pass the medical examination, serve in Civil Defense units. The decision whether a recruit "fits for service" is made by medical examination board on the basis of physical, mental and psychological tests, and there are 3 possible verdicts, by which a recruit: - Fits for the service (i.e. meets all the requirements); - Fits conditionally (limited) by a number of requirements, but can serve in the Civil Defense); - Unfit for the service.

Those recruits, who are able to perform military service, are to get trained in the so-called "schools for recruits" (Rekrutenschule (RS) in German). The period of training depends on the military branch and the peculiarities of the service chosen, but not less than 16 weeks. If a recruits wants to become a grenadier (a kind of elite troops (special forces) of Switzerland) in the future, the course of training takes 25 weeks. Since there are four official languages in Switzerland, the recruit has the right to study in their native language in their own canton, in one of the 20 existing "schools for recruits".

After the basic "boot camp" training and learning the specifics of the preferred armed forces branch functioning, the recruit got trained in the ranks of active military unit. After the schools the soldiers are sent back home, taking with them their uniform and government-issued weapons. Annually the conscripts are to pass military training and shooting courses, which ensures a high mobilization potential in case of need. If at the time of call to the military service for retraining a conscript is ill, it does not mean the release from the necessity to pass the training courses, but only postpones the training for a certain period. Depending on the military branch, the courses last 2-3 weeks, averaging about 260 days for the whole period of military service in Switzerland. 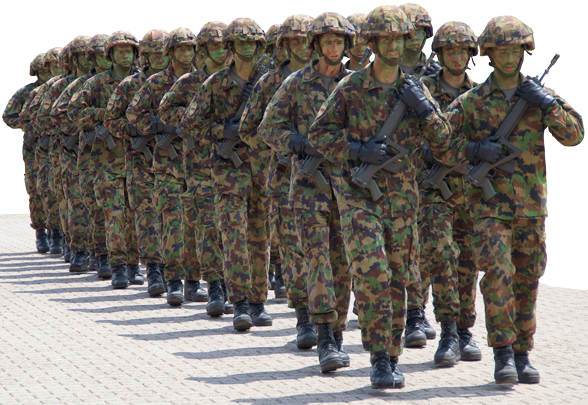 The annual draft in Switzerland involves about 40 thousand people. If the conscript is fit or conditionally fit for the military service, but for some reason he can not serve, he will have to pay a war tax (which reimburses his absence in the ranks of the country's armed forces) in the amount of 3 per cent of revenue until he is 30 years old. The objection from military service leads to criminal prosecution (imprisonment). But those who refused to serve on religious grounds may undergo alternative civilian service, which is 1,5 times longer that the period of military service.

It is well known, that the most popular method of expression the folk's opinion in Switzerland is referendum. The referendum on the matter of the abolition of general military duty and the transition to a professional army took place on September 22, 2013, and 73% of the Swiss citizens were in favor of the preservation of the general conscription.

For each day of the military service the citizens of Switzerland are paid a basic salary (Besoldeten Diensttag). Currently the payouts, depending on rank, are as follows:

*Since 2004, such military unit as Army Corps no longer exists in the Swiss army. In fact Korpskommandant is the Commander-in-chief of the entire Armed forces after the mobilization announcement. When signing international treaties and agreements the rank of Korpskommandant is considered equal to the rank of Lieutenant General.

To start paying the EO, an employer has to establish a registration card - Meldekarte (EO-Anmeldung), the absence of which makes the compensation payment illegal. Also, the compensation is not paid to the retired (in Switzerland, the retirement age is 64 years for women and 65 years for men).

From January 1, 2015 a new regulatory document "6.01 Leistungen der EO / MSE" (Erwerbsausfallentschädigungen) entered into force, which regulates the matters of compensation payments for financial losses during the service, providing the payments peculiarities for all the possible situations.

If you talk about the system briefly and without deep immersion into the details, a young conscript receives the compensation of 62 Swiss Francs per day.

A conscript, who was is not engaged in entrepreneurial activities, also receives 62 francs per day, but for those who attend the courses for sergeants and non-commissioned officers, or different military training programs can receive up to 111 Swiss Francs (CHF)/ day.

The serving entrepreneurs receive the same minimum payment as all the other categories (from 62 to 111 Swiss Francs per day and above), but the maximum amount is increased to 196 Francs per day already, and, in addition, they receive an additional payment equal to 80% of the average income in the country and even higher for those who improved their skills at the courses. If a military has children, an additional compensation is to be paid in the amount of 20 CHF per day for each child. However, the total amount of daily compensation for any category must not exceed 245 Swiss Francs per day.

The classic mountain low-laced military boots of Switzerland are fairly simple, reliable and easy to repair by their design. It makes little sense to discuss them for a long time, because these boots are well-known in the whole world and are quite popular with collectors, reenactors or just fans of "good old quality footwear". 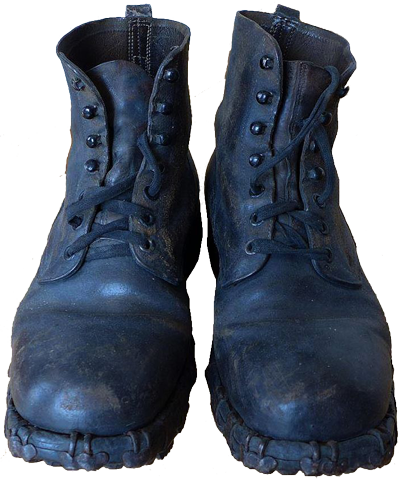 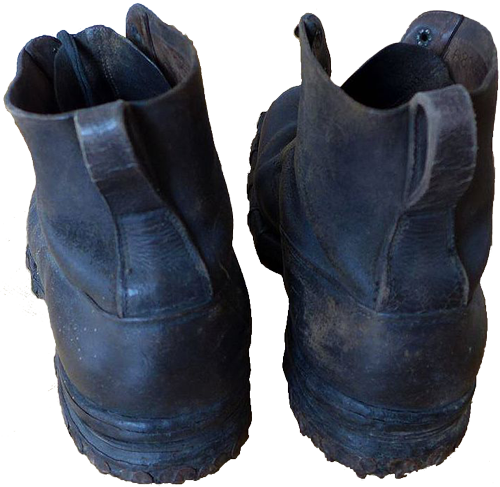 If to describe briefly the features of these Swiss low mountain boots, it is worth mentioning that the top of the boots was made of thick (about 3 mm) cowhide (box-calf) leather, flexible (due to high fat content), very strong and durable. It was usual to replace the out-soles, worn-out completely or partially, while the boot's top was in almost excellent condition. 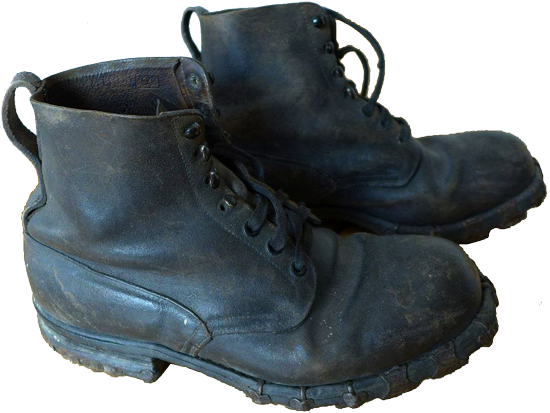 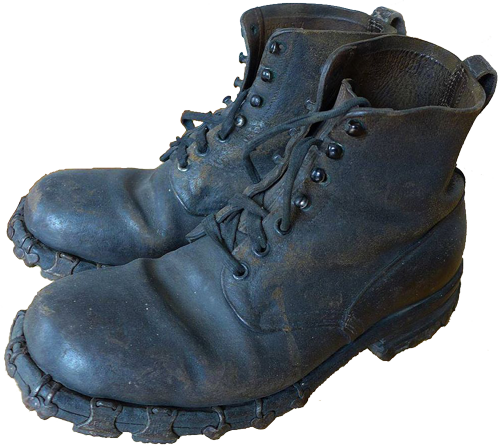 Under the lacing these boots feature an original leather "shutters" to provide better protection of the upper sides of the feet, relieve the laces' pressure and improve the overall construction reliability and durability. Such lather "shutters" were used later in the subsequent models of the Swiss military boots, for example in KS90. The stamp-marking with the manufacturer's name (e.g. "BALLY" or "AMMANN"), size and width of the boots as well as the production date used to be placed on the upper insides of the boot's top. 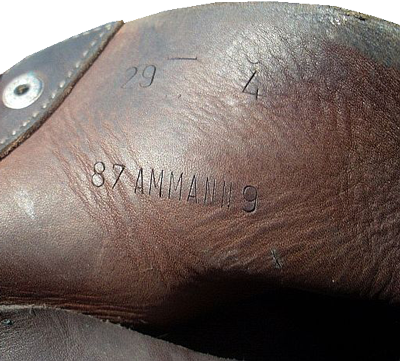 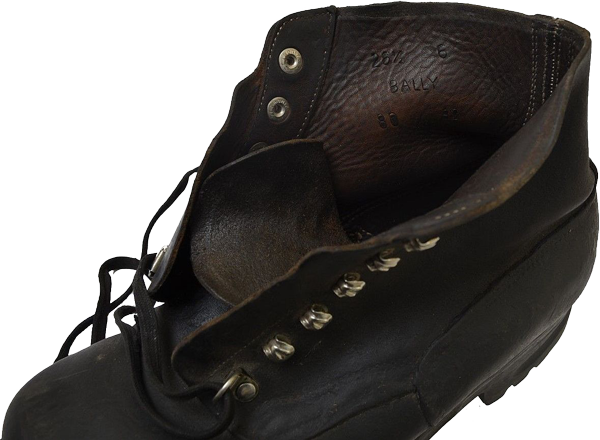 The size of a Swiss mountain boot traditionally corresponds to the length of the insole, not foot (as distinct from the boots of many other armies, for example, the German Bundeswehr). This peculiarity sometimes leads to difficulties in selecting the proper boots sizes.

In the first half of the 20th century to sirca 1960s the out-soles of the Swiss mountain boots were made of thick leather, padded with hobs, assorted nails and the so-called "tricouni" (tooth-shaped taps made of soft non-hardened steel, which covered the welts of the out-soles). 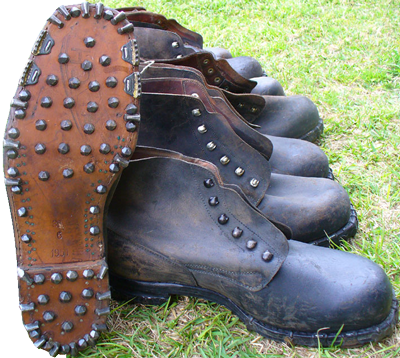 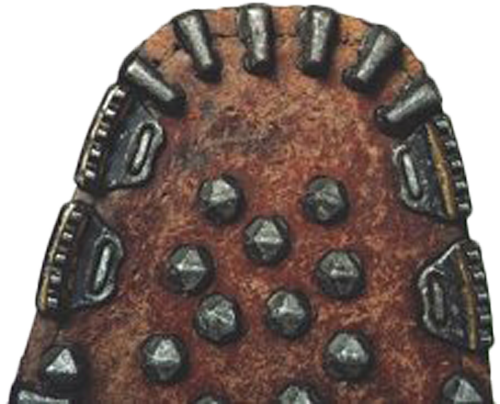 The word "tricouni" itself came from "Tricouni" - the name of a Swiss company, which, in turn, was named by the nickname of Félix-Valentin Genecan (1878-1957), a jeweler and mountain-climber from Geneva, who invented . Using "tricouni" improved stability and traction of the boot's soles on ice, scree, rocks, and even wet stones or grass. 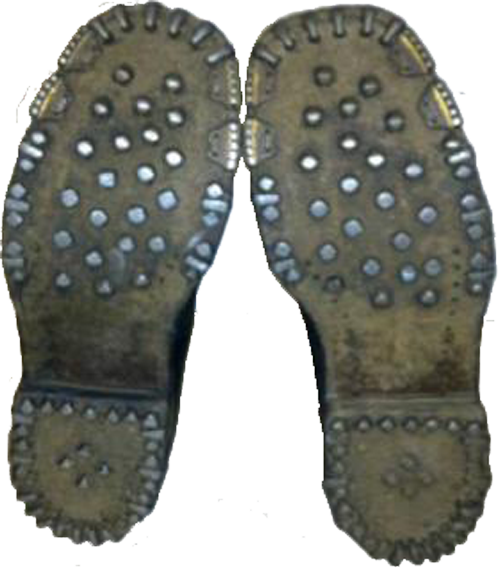 The shapes of "tricouni" and the method of attachment to the boot's out-soles welt were different, starting from special nails and staples (up to 25 mm in length) to screws, and one-piece metal plate with teeth could be attached to the heels instead of individual clips. Mountaineering crampons used to be worn over the "tricouni".

The design of the boot's upper did not change after the out-sole replacement from leather to rubber. The renovation to the cleated rubber sole with "Vibram" tread pattern was caused by deficiencies of the leather soles, equipped with nails and "tricouni": these metallic elements significantly increased the weight of the boot. In such boots the feet felt cold faster because of close proximity of the metal pieces to them. Moreover, being exposed to moisture, the leather sole used to get wet quickly and lose the integrity of connection with metal parts which often dropped out and lost, requiring replacement...

Therefore, the transition to more lightweight and practical rubber sole was simply inevitable. The new soles of the Swiss mountain boots featured the licensed modification of the "Vibram" tread pattern (the acute-angled crosses were replaced with simple squares in the center of the sole pattern, while the heel pattern had no such elements at all). The marking was put on heels and soles, and consisted of the size, year and producer abbreviations. 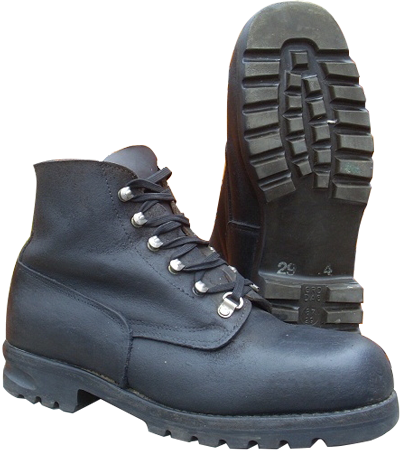 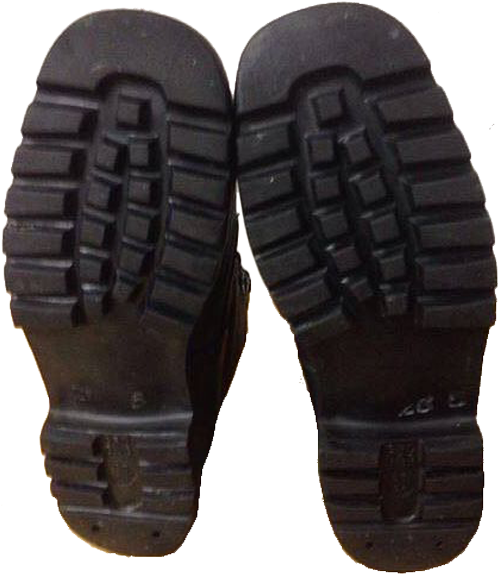 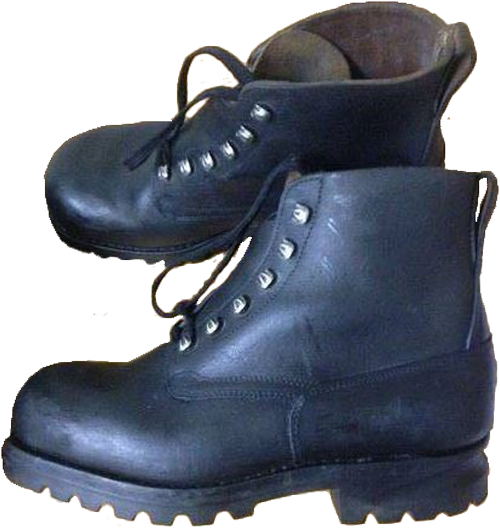 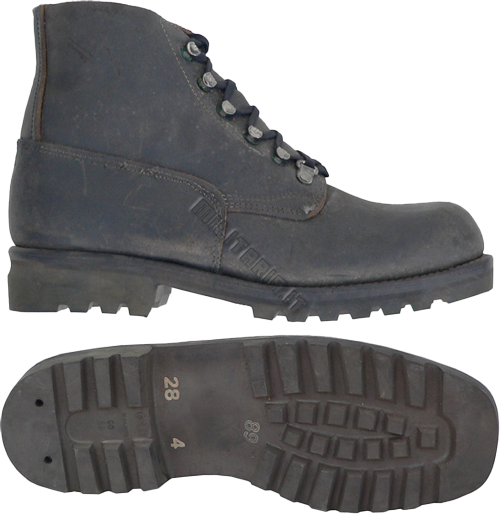 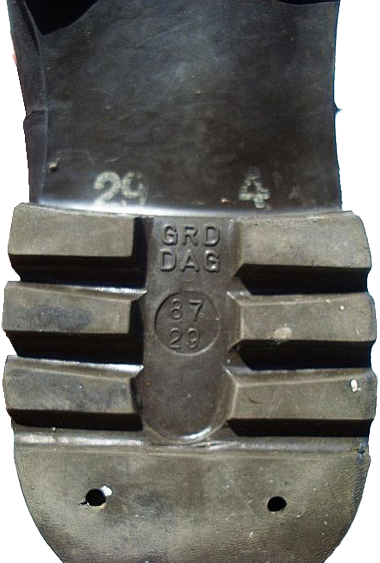 The lacing system in the low Swiss mountain boots ranged from completely consisting of hooks to mixed options when one or two of the lower elements were just simple round eyelets or "D"-shaped rings. In the later versions of the boots the lacing design and system were improved - the boot's design contains minimum of seams, added soft leather cushion on top of the boot and the hook clamp to maintain the fixation of unleashed lacing. 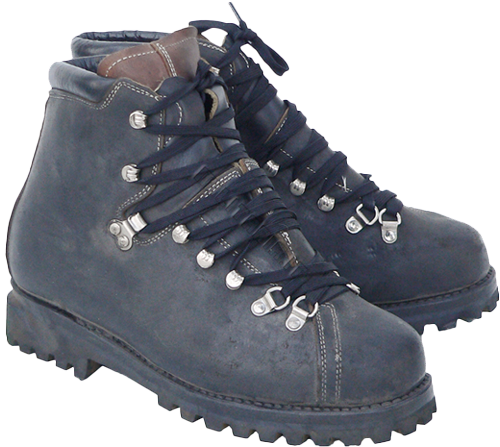 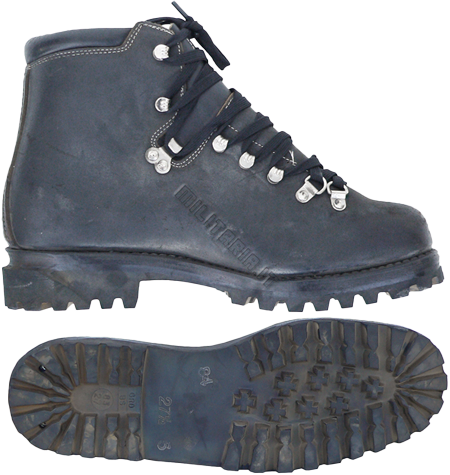 The out-sole tread pattern has also changed - instead of squares there appeared the classic crosses, like on the Swiss coat of arms.