Before the April 1994 the Armed Forces of South Africa (full name: the "Republic of South Africa" in English and "Republiek van Suid-Afrika" in Afrikaans) were called the South African Defence Force (shortly "SADF"). 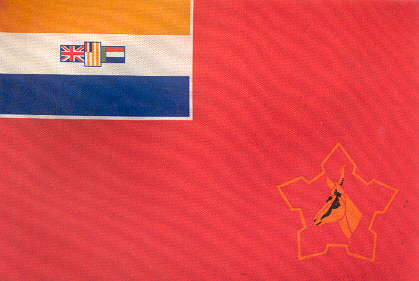 The Ministry of Defence of this country, the South African Defence Force Union - UDF (Union Defence Force) was established back in July 1912, and received the well-known name "SADF" in the near 1958.

In the mid-1970s SADF consisted of three military branches: Army, Air Force and Navy, four years later the military medical service was added to them. 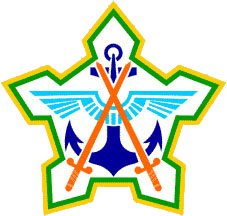 In fact, South Africa was oriented on the Western world, and followed its course of military-technical development along with Australia and New Zealand.

After departing from the policy of "apartheid" in April 1994, SADF has been transformed into the SANDF (South African National Defence Force). At this the new structure incorporated both the territorial defence forces of Transkei, Ciskei, Venda and Bophuthatswana (South African Bantustans), and the partisans of the so-called African National and Pan-African Congress, the national South African liberation movements.

Currently, the military department of the new South Africa is known as "The Ministry of Defence and Military Veterans." Thirty years ago it was really impossible for the South African military to have such Minister of Defence as black woman with hardly pronounceable name Nosiviwe Noluthando Mapisa-Nqakula.

The Armed Forces and the governmental institutions of modern South Africa became mostly "black", but the mass expulsion and persecution of the "whites" didn't occur, in contrast to Zimbabwe. South Africa should be thankful to Nelson Mandela personally for the fact that, after the change of government, the whites didn't faced with the sad fate of the former South Rhodesia, where the oppressors and the oppressed simply changed the places of each other, and the country actually fell down into the "stone age". After all, Zimbabwe even had to cancel its money, because Zimbabwe dollars cost less than the paper of their banknotes.

On the contrary, South Africa today, by its level of economic development and the availability of natural resources, is included in the club of the most powerful developing countries - B.R.I.C.S. (Brazil, Russia, India, China, South Africa), and is quite interesting country in all respects.

It is well-known fact, that Afrikaans is one of the official languages of South Africa. Actually, this language is a sort of old- southern dialect spoken by the immigrants to the Cape Colony, the "boers" ("farmers" in Dutch). Although during the years of its existence Afrikaans was influenced by a variety of languages, from the Flemish language to the Malay-Portuguese and English, this language is clearly understandable for the Dutch.

An interesting fact: the name of the South African army is "Weermag" in Afrikaans. One can see its direct correspondence to "Wehrmacht", the name of the Third Reich Armed Forces ...

The Armed Forces of South Africa and various paramilitary organizations left a bright trace in the military history, while the features of the South African uniforms are still very interesting to the researchers and re-enactors.

The climate and the most characteristic features of the South African nature defined the main colour of military clothing and boots - brown. So the uniforms and army boots of SADF were "Nutria"-coloured (a shade of brown colour). 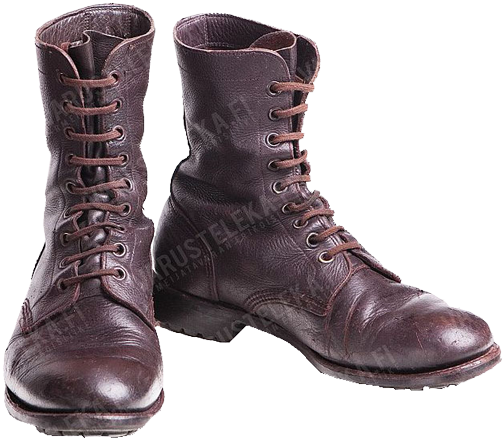 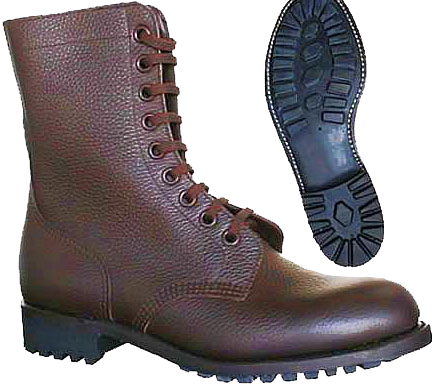 Such "Nutria" colour fitted very well to the colour of the South African bush (the area covered by the African shrubbery), local soil and vegetation. The "Nutria" uniforms was similar to contemporary British army uniform in cut. For example, there was a special pocket for the first-aid medical package on the trousers, just near the upper right mortise pocket.

By the overall style, design and most characteristic features, the South African military boots were consistent with the contemporary boots of the NATO countries. With the exception of the upper part, the South African brown boots resemble French military boots "Rangers" BMJA Mle 61 (modification of the model 1952 boots, adopted in the year 1961). The appearance and design of the lather upper, especially the tread soles are very similar, though South African boots lack leather cuffs with two buckles on top

The grainy brown leather of SADF boots top is durable and flexible. There is no lining inside the boots, except for the additional rough-out leather "strip" in the upper part, intended to keep the pants inside the boots and to provide better grip. The flap of the boots top is "semi-closed" , the lacing system consists of nine pairs of simple round eyelets, the cotton laces are brown too. The counter of the boots is reinforced with an additional leather patch. 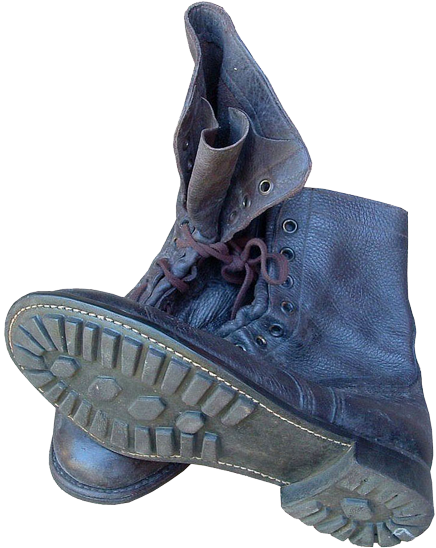 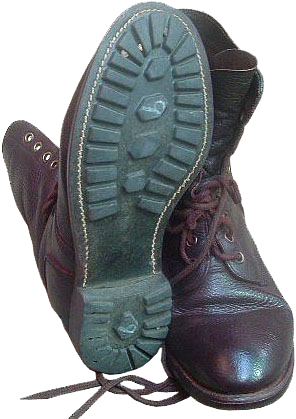 These boots out-soles are glued and stitched all along the welt of the boot sole, as well as in their contemporary army boots of Belgium, France, Germany of the 1970s. The out-sole tread pattern is shifted somewhat from the edge of the welt towards the centre of the out-sole for ease of stitching. The tread pattern of such boots provides good grip with most surfaces, the material of the out-sole is solid and durable vulcanized rubber. The SADF boots with such soles have been produced for decades and are still issued to the South African military even nowadays.

On the photos one can see modern South African military personnel in the "Soldier 2000" camouflage and the above described boots. 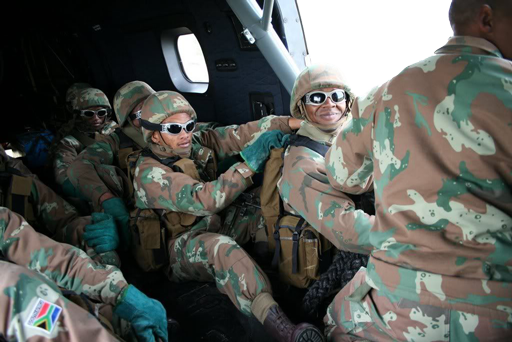 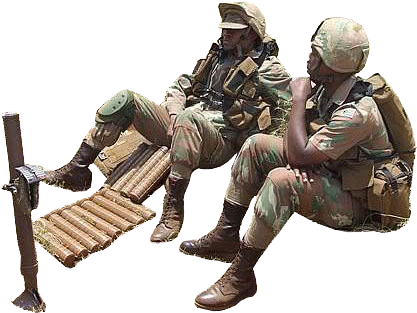 The cut of the SADF "Soldier 2000" uniform, which was introduced in 1998-1999, is identical to the US BDU uniform, which taken as an example. The reviews about this uniform on various South African military forum are mostly not very positive due to mediocre quality of the new uniform (for instance, poor quality of tailoring and dye (the uniform loses colours quickly after washing). No wonder, that many South African veterans prefer the "good old" and proven monochrome "Nutria" uniform. 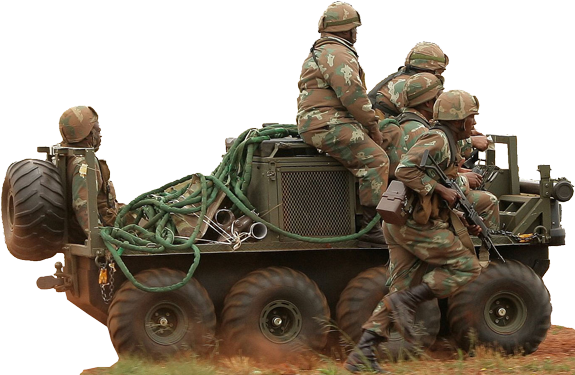 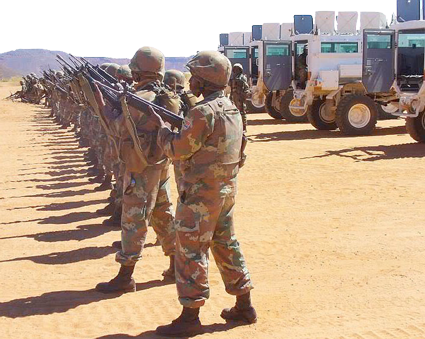 The special reconnaissance units of the South African Army (Special Forces Regiments - the Reconnaissance Regiments) - the so-called "RECCE" ("REConnaissanCE Commando) enjoy special attention of researchers and re-enactors all over the world.

The first of these divisions were created in 1972 under the name the "1st Reconnaissance Detachment KOMMANDO", and was intended to assist the Angolan opposition - UNITA guerrillas, which were fighting against the local Communists, supported by the USSR, Cuba, East Germany and North Korea.

These were the people who have successfully passed severe selection, each of which was a skilful paratrooper, sapper, reconnaissance and sabotage specialist. The severity of their selection can be proved by the fact that by the end of the war in Angola in 1988 less than 480 of one hundred thousand applicants managed to overcome the selection tests and become qualified operators. More than 80 of them died during the Angolan war. By early 2003, less than 900 people managed to get the qualification of "South African Special Forces operator".

It is interesting that in South Africa, during the times of "apartheid" (the separation of the races), the "RECCE" special units had never been addicted to racist policy, there were no artificially created barriers for "black" Africans entry into the unit, so finally, the racial composition of the special forces was about 50:50 (blacks : whites) in general. This was despite the fact that there were the Boers, who dominated in SADF, and even their white English-speaking colleagues got offensive nicknames "Soutie" or "Soutpiel". This rough alias means "salty dick", if to translate literally from Afrikaans. This was an allusion to the fact that a typical English-speaking guy was standing with one foot in England, and another foot was on South African land. So the dick between his legs was "hanging out in the ocean". ☻

During the "Border wars" of the years 1966-1989, the South African troops also used some other models of army boots. 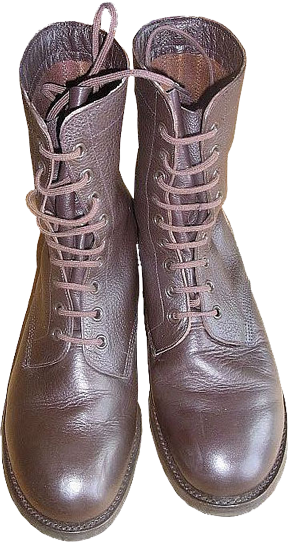 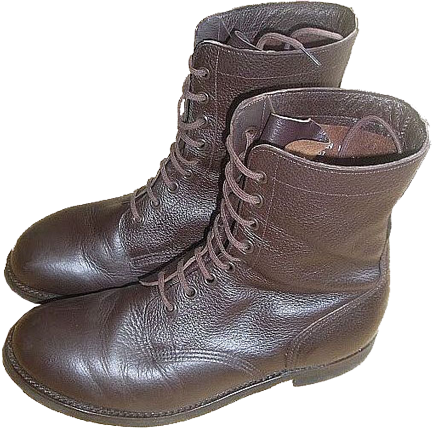 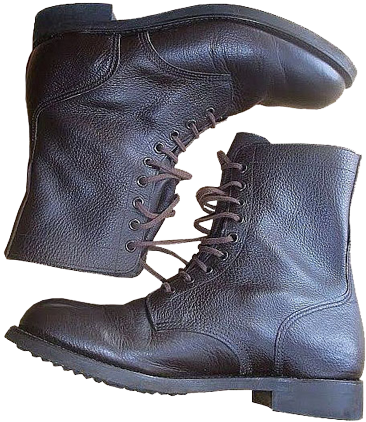 One of such models is virtually identical to the boots, already described above, with the stitching along the welt, but the tread pattern of the out-soles was of another type - shallow transverse grooves. This is a very recognizable South African tread pattern. One of the mass producers of such boots is "WAYTREAD" company, a South African footwear manufacturer. 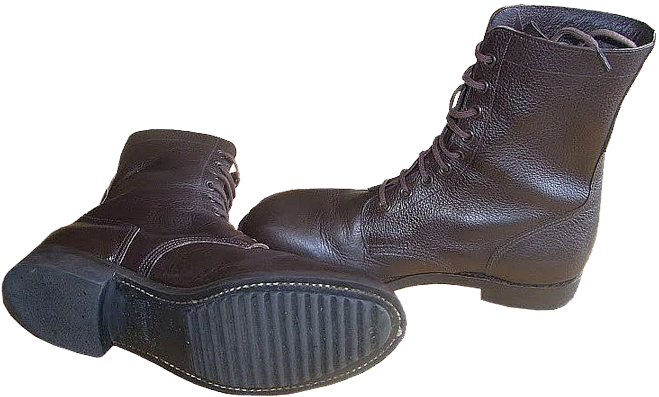 The insole was usually made of leather. Inside the boots and on the insole they used to indicated such information as the manufacturer's name, the year of manufacture, size, internal military identification and contract numbers.

One of the most popular kinds of footwear in Africa are plimsolls - simple, easy and cheap boots. During the times of USSR it was usual for African students from the "progressive" countries, who studied in Soviet universities, to buy several pairs of plimsolls in sports stores for sending to their native countries. 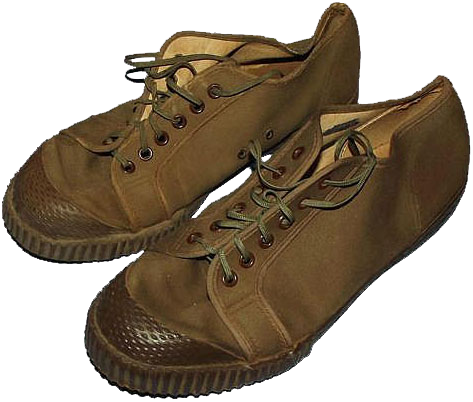 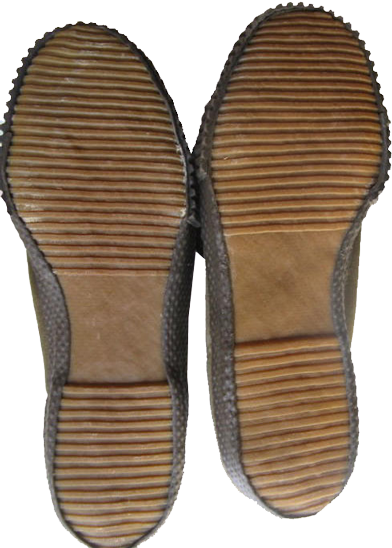 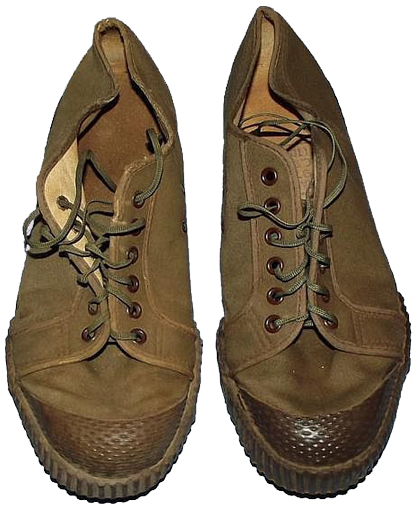 The plimsolls were appreciated by Europeans too. For example, during the events in Algeria, the French troops in North Africa widely used the so-called "Pataugas" - a kind of canvas boots on durable rubber out-soles. There is widely known commercial trade mark of such footwear - the "Palladium" boots.

The South African Armed Forces also use plimsolls, which are commonly known as "Tekkies", both for sports training and for military operations. 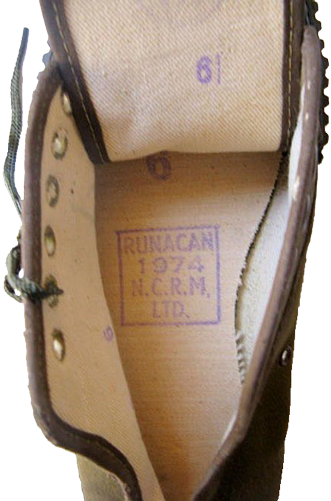 The tread pattern of plimsolls reminds the SADF army boots by shallow transverse stripes on their solid rubber out-sole. In appearance the "Tekkies" look like most common plimsolls, with two-layer fabric top, lacing system of six pairs of simple round eyelets. On the inner sides of the plimsolls there are two ventilation eyelets. 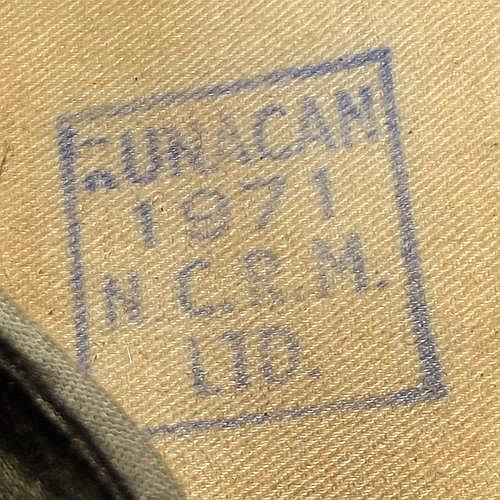 Like many European countries, in 1980-1990 years in the Armed Forces of South Africa also used brown boots with classic "Vibram" type tread pattern out-soles. The top of such boots was glued and stitched to the out-soles or DMS (Direct Mould Sole) method was used. 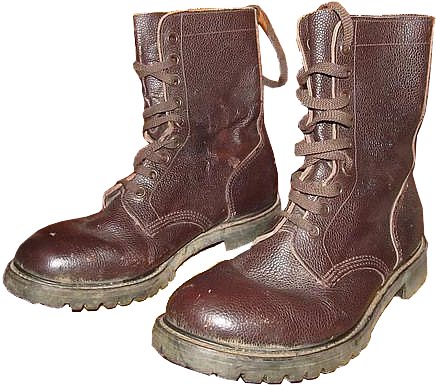 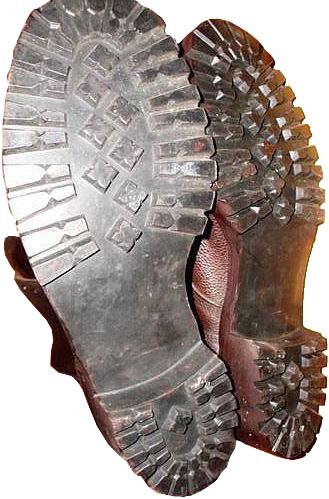 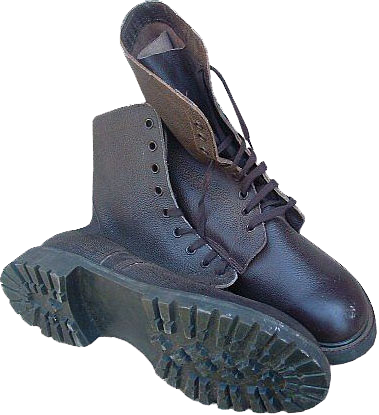 The South African special forces (paratroopers) used the improved version of such boots: judging by their appearance, one should notice the influence of famous American "Corcoran" type "jump boots" on SADF boots design. These boots are high, with soft leather cushioning on, the lacing system featured not 9, but 12 pairs of round eyelets, also the boots have an additional oblique protective insertion for better amortization in the area of malleolus bones and "close" flap of the boot's tongue.

These boots feature durable vulcanized rubber out-sole, stitched and glued, and reinforced by additional screws, quite thick and similar to "Kampfschuh schwer" (the Austrian heavy combat boots), the tread pattern of the out-soles are classic "Vibram" soles. 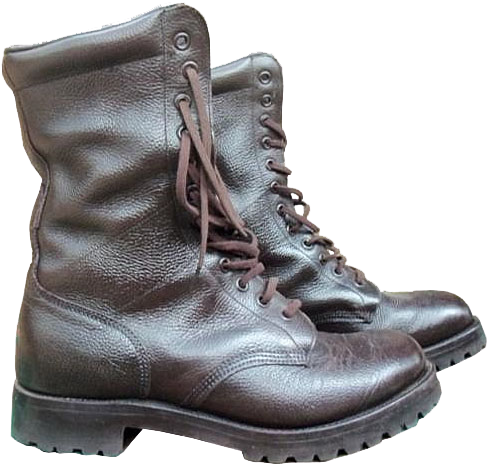 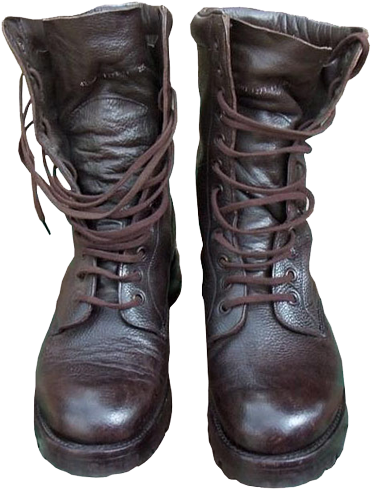 There were some South African army boots of alternative colours, though they were produced in much smaller batches. 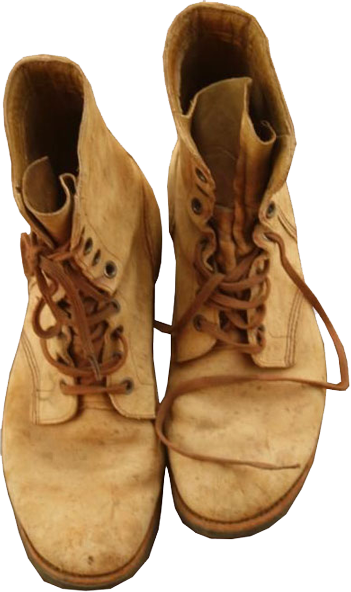 As an example, one should mention standard sand-coloured boots made of suéde (shammy leather), which were manufactured by the already mentioned "WAYTREAD" footwear company. These boots by their overall characteristics do not differ much from similar brown-coloured grained leather SADF boots. 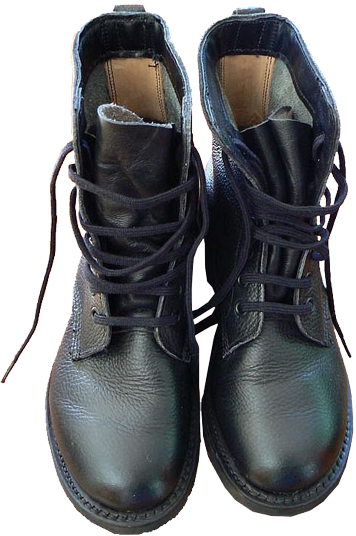 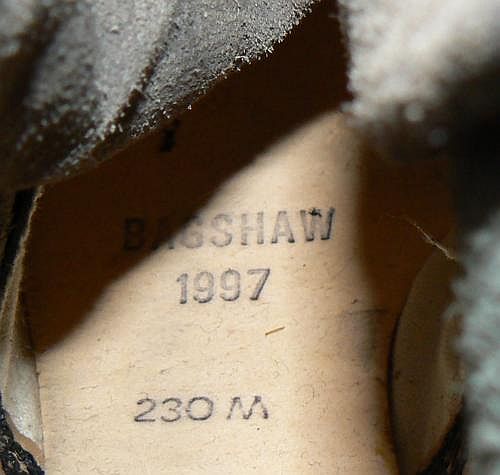 - Leather loop at the back top part of the boots, intended to fix the boot laces, wrapped around the top;

- Inside the lower part of the boots, there added an additional lining of light yellow "glove"-type leather (on the level of the malleolus bones and up to the top of the inner back side). The stitches on the inner back side are covered to protect the feet from rubbing.

These black boots also issued to the South African peacekeepers, who operated in the neighbouring African countries under a UN mandate.