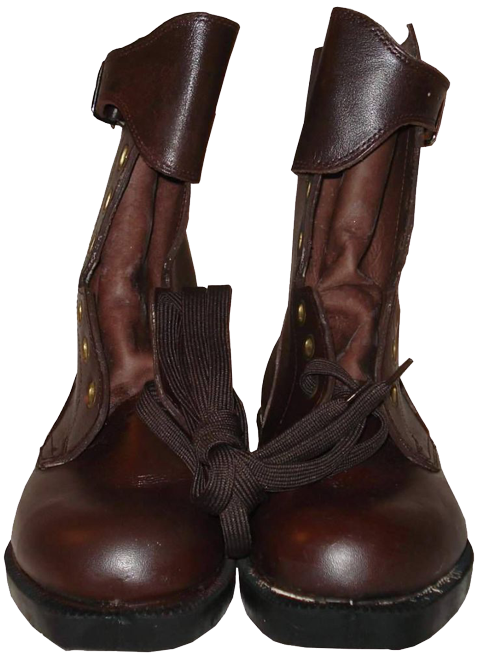 The most common boots of the Hungarian People's Army (Magyar Néphadsereg, abbreviated MN) is model M65/75, known in Hungary as "surranó". The Hungarian army boots differ from the other military boots with oval-shaped lacing eyelets, made of non-ferrous metal (bronze). The lacing system consists of 3 pairs of eyelets in the lower part of the lacing, and 4 pairs at the upper part. The main boot's colour is brown, the leather of the top is smooth, fairly thick and quite sturdy. 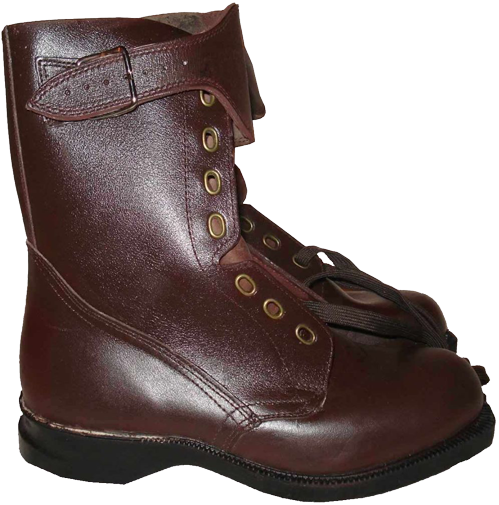 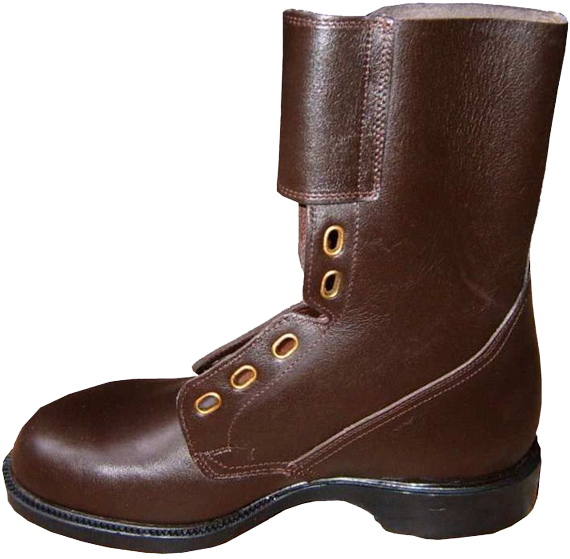 Oval shaped form of eyelets is the most characteristic feature of the traditional Hungarian military footwear in general, and of cavalry in particular. As an example, one can mention "Bilgeri", the Hungarian red cavalry boots (actually high boots with attached leather leggings). On the photo one can see six pairs of oval eyelets for leather laces, which, in turn, are characterized by rectangular cross-section. 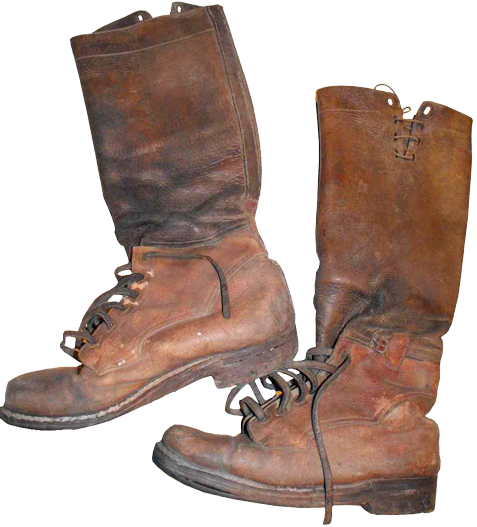 The laces of the contemporary Hungarian boots are "flat' as well.

Another peculiar feature of the Hungarian military footwear is a belt fastener with a buckle on the top of each boot. Initially it was a single-strap fastener with one tooth buckle, but later two-straps fasteners were introduced. 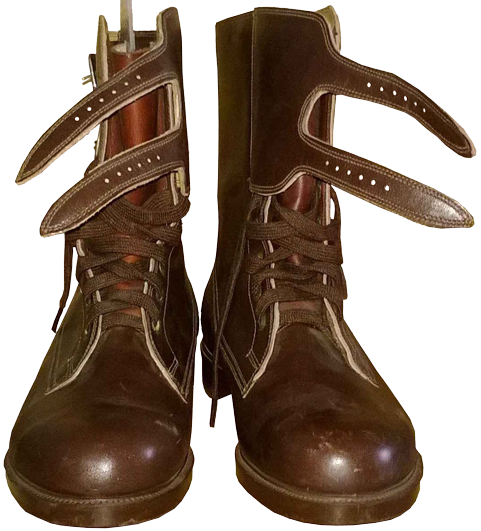 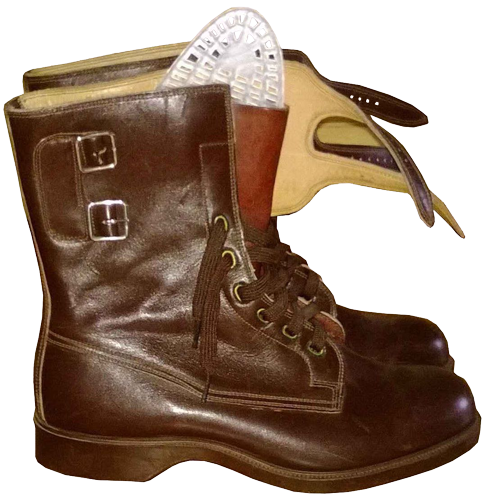 In fact, that were the same boots as the previous one-belt fastener boots, but this difference has made the appearance of popular mistake: even on the Hungarian thematic web-forums the double-straps boots are often called the "officer's" boots. Actually, there are no specialized Hungarian field boots for the soldiers and the officers. For example, we can see the photo, where the Hungarian recruits try on the brown M65 boots with two buckles. 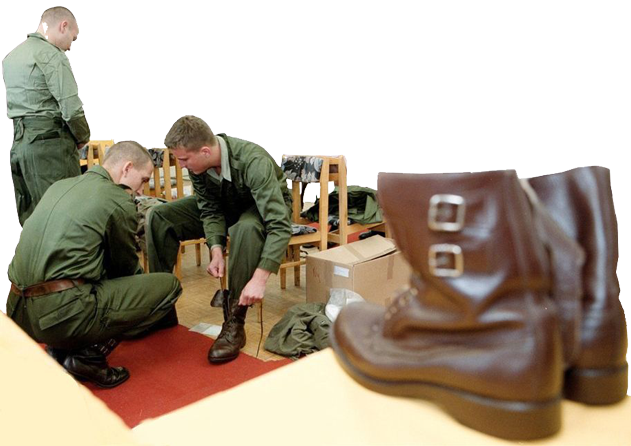 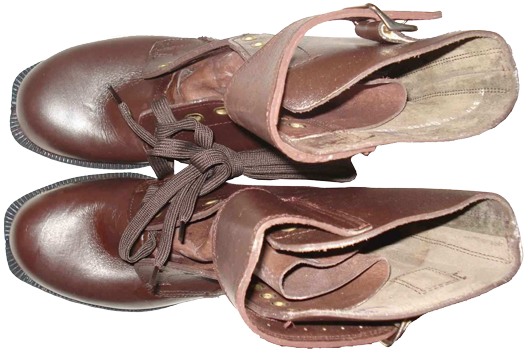 In the basic version of the original M65 "surranó" boots the stitching consists of 3 (2+1) lines, the boot's counter is reinforced with extra patch of leather, as well as the and back seam. These boots lack the leather loop for laces, intended to secure the wrapped-around laces (this useful feature is very typical for contemporary German or British army boots). 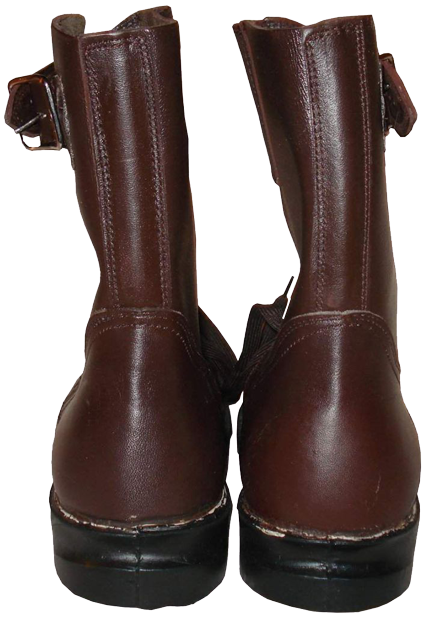 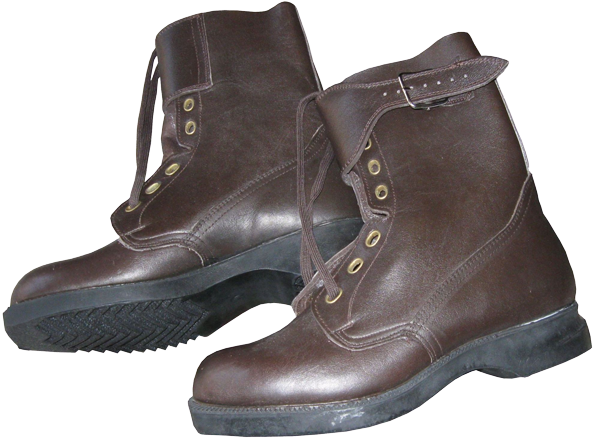 M65 "surranó" boots of Hungary are a kind of DMS (Direct Moulded Sole) boots. The cast-solid polyurethane out-soles have weakly delineated heels, and can be black or brown, depending on the manufacturer.

On some models, the out-soles are made of solid black vulcanized rubber. 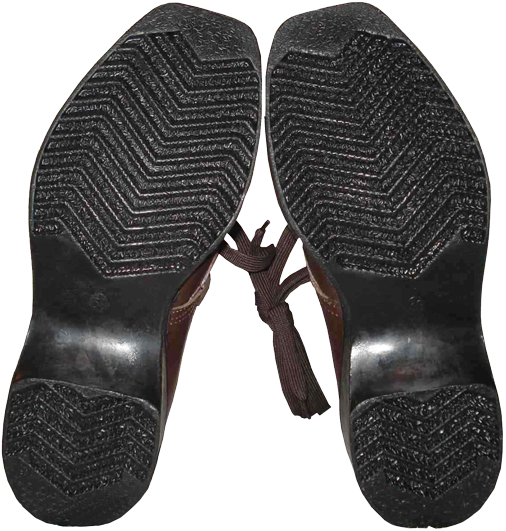 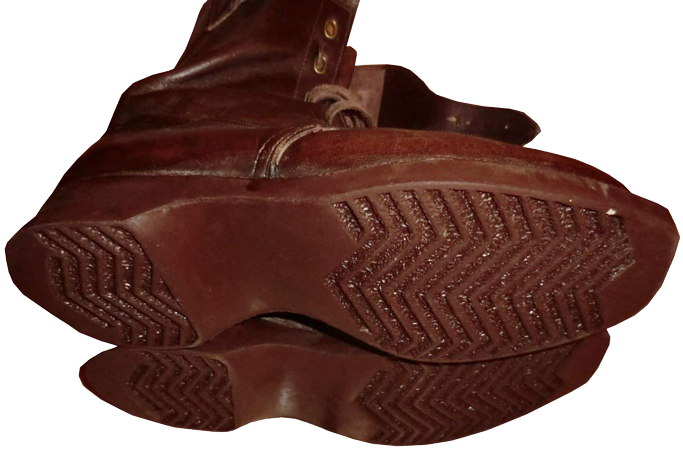 The form of the Hungarian army boots out-sole welts is also very peculiar: the front side is almost square-shaped, with smoothed corners. On some models one can see the skewed grooves on the heels. The form of the welt and the grooves serve for the convenience of ski bindings. 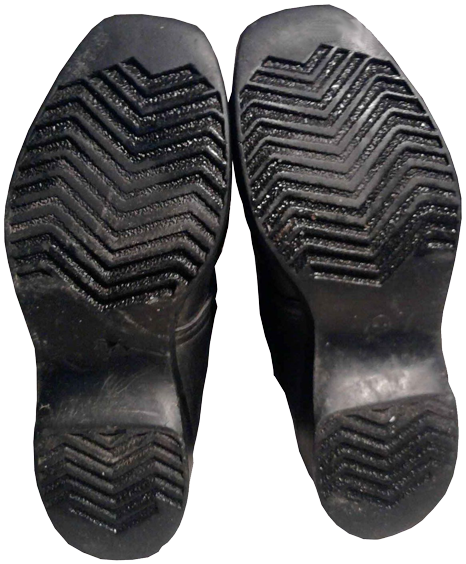 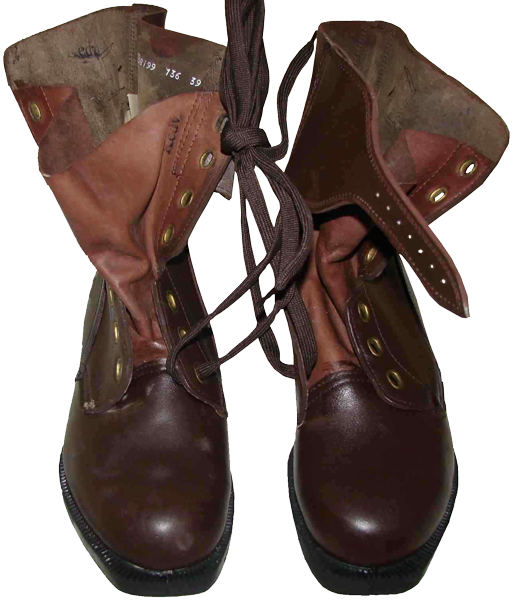 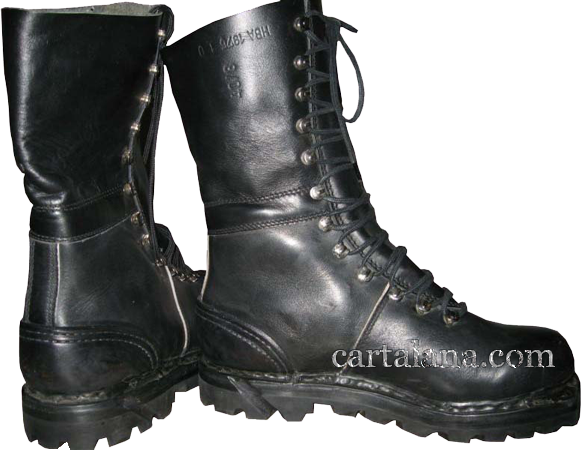 The tread pattern of the out-soles are entirely copied from "Kodiak", a famous Canadian army boots model, manufactured by "Greb" company in those years (see the picture to the right). 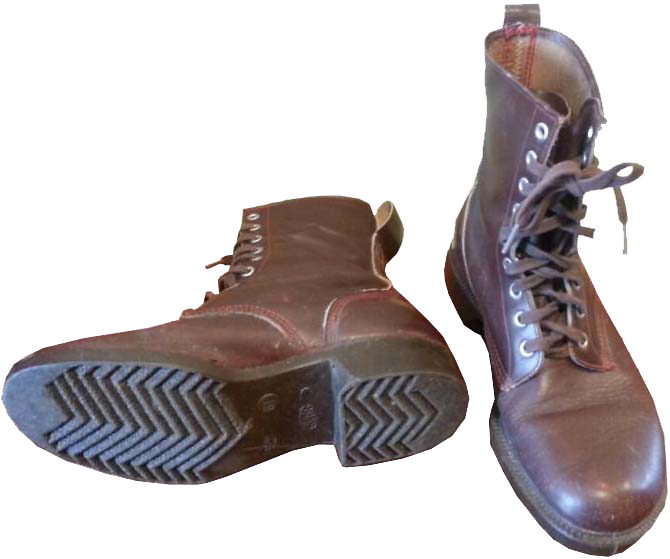 The Hungarian army boots featured no lining (an additional layer of thin leather) and no padding "collar" on the boot's top. However, in those days, the boots of many military advanced countries, such as France, the Netherlands, Belgium etc. didn't have these features as well, and even two decades later they still had none of these handy innovations. 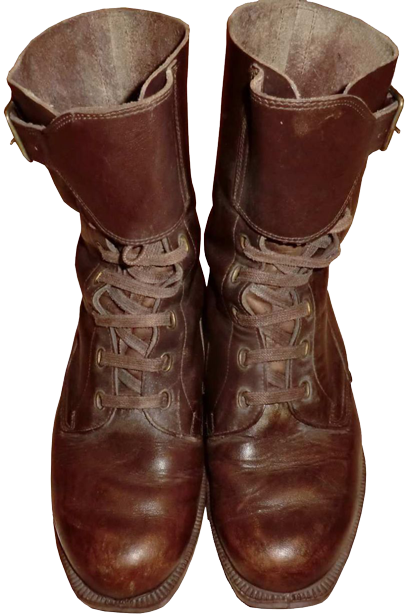 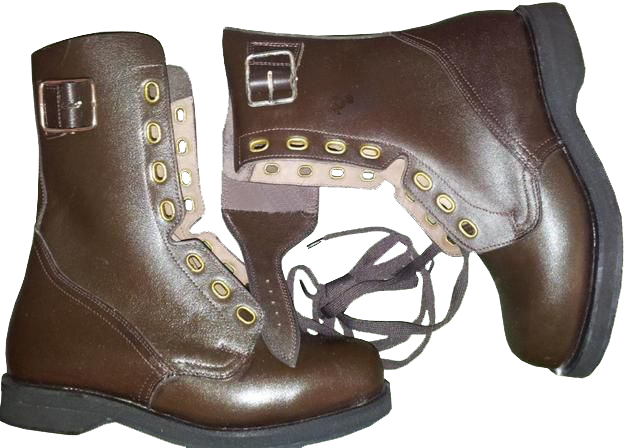 The boot's tongue was made of light-coloured and soft leather, stitched high to the boot's top. Some manufacturers used to put their marking (serial number, size etc.) on the tongue. In other cases, the marking used to be placed inside the boots. 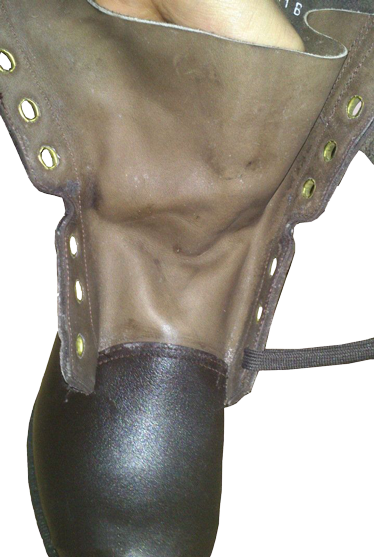 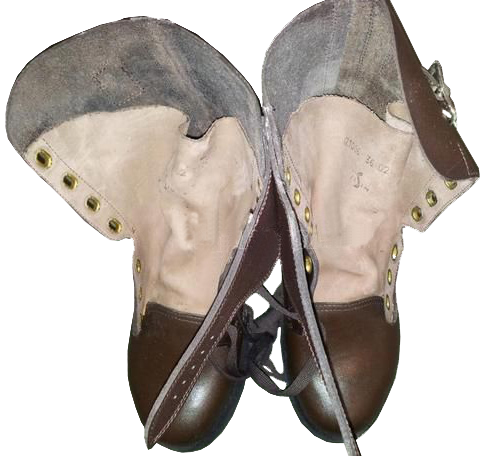 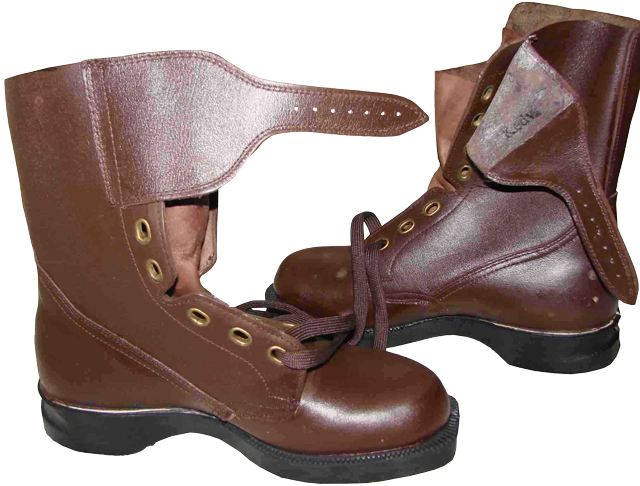 The highly stitched boot's tongue of the Hungarian military boots really improves the water resistance, but according to the opinions of Hungarian army veterans, this feature also used to worsen the air circulation inside the M65 military boots. One of them wrote the following review: "...that's were beautiful boots, quite popular among the civilians (hunters, fishermen, tourists) as well, but they also were quite heavyweight, cold in winters and too hot in summer time, especially when the feet sweat much... ". Having trying to solve this problem, the Hungarians used white-coloured plastic mesh insoles, easily washable and quick-drying. It was a very progressive solution, though, it could not change the situation radically. 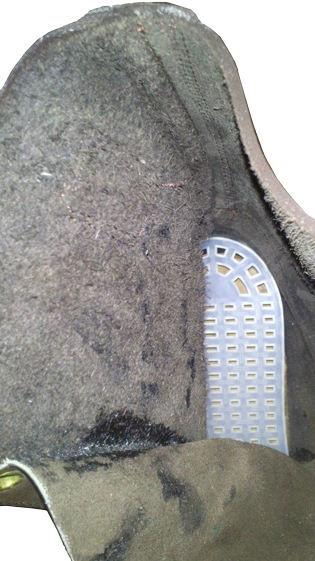 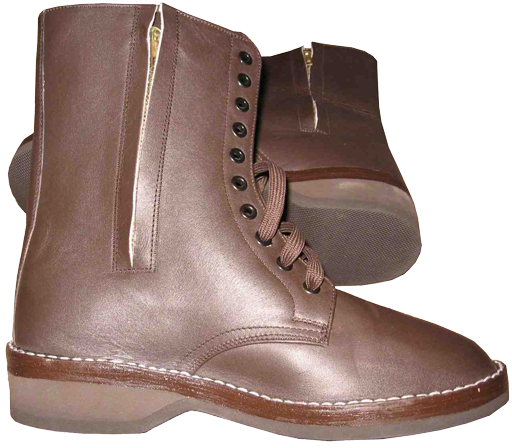 However, no one has ever positioned Hungarian military boots M65 "surranó" as all-weather boots, good equally for the cold and for the heat. Such boots were usually used due to the necessity only, and only in the last decades most leading military countries of the world clearly follow the trend of footwear, apparel and equipment specialization for particular climate and theatre of combat operations.

The Hungarian Air Force pilots used to wear soft leather brown boots of the same type as all the other Air Forces of the world: soft rubber out-soles with very shallow, almost smooth tread pattern, with welt stitching and side-"zippers" on the outer sides of the boots for quick putting the boots on and off.

In 1975, a black-coloured modification of the "surranó" boots was introduced and named M75 model boots. At the same time, the NATO countries opposing the Warsaw Pact armies, began gradual transition from brown-coloured to black-coloured boots: it turned out that black boots are less noticeable in night vision devices. Black Hungarian M75 "surranó" boots used to be manufactured in a single buckle-design, as well as their predecessors - brown M65 boots. 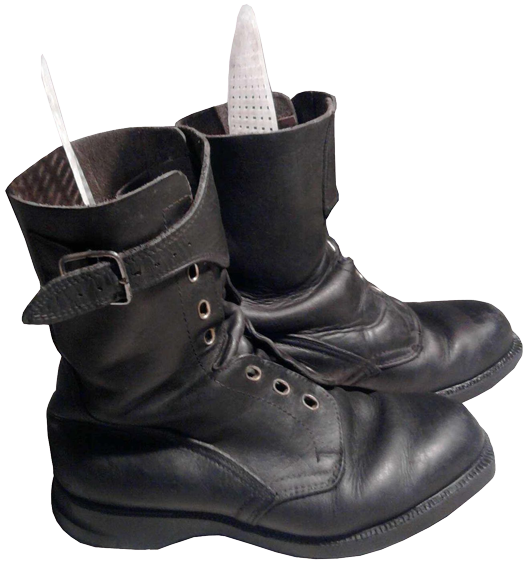 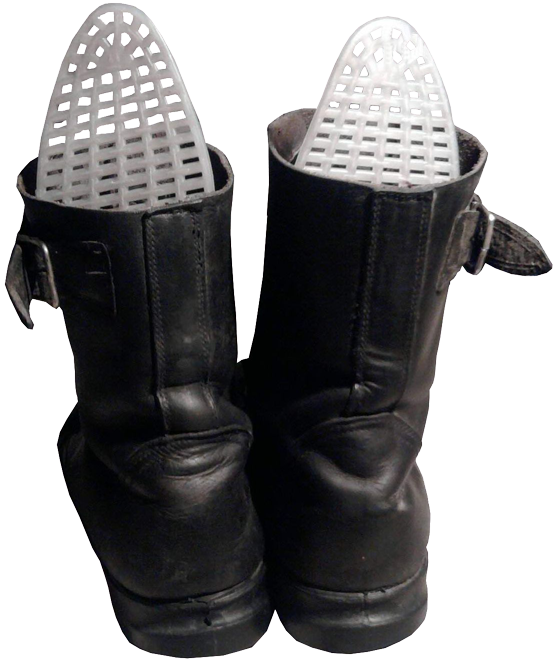 The modification of black M75-boots with two buckles fasteners could be called one of the best versions, and they were not worse than their counterparts of NATO countries. Inside the boots there was an additional layer of thin and robust light-coloured leather, that improved the comfort of wear and favourable micro-climate inside the boots. The number of eyelets was reduced by one pair due to the use of an additional buckle. The stitching was reinforced: 4 stitches (2+2) were used instead of 3 (2+1). The overall design was also improved - new model boots became similar to the best contemporary American, British or Dutch boots, and the design of these boots followed the "minimum seams" trend of boot construction. 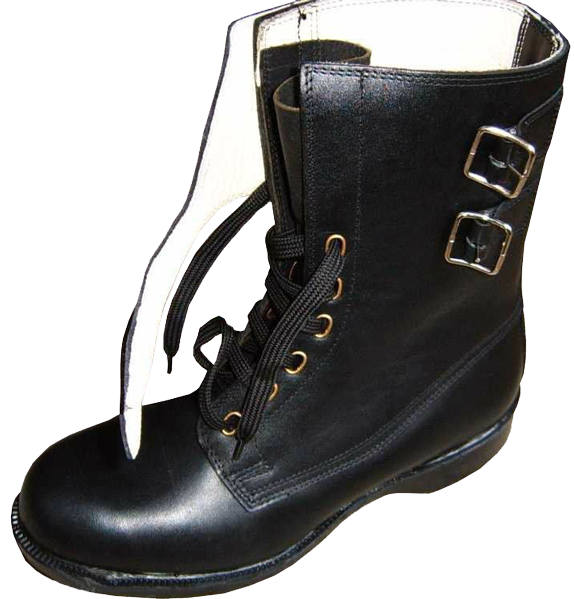 Later, in the 1990s, when Hungary took a course to join the EU and NATO, the army began supplying boots, approaching the standard of North Atlantic Alliance. As an example, the improved version of M75 black boots feature the padded "collar" on the boot's top and speed-lacing system with "MARK" eyelets, just the same as on the boots of Germany, the Netherlands, Denmark or Great Britain. 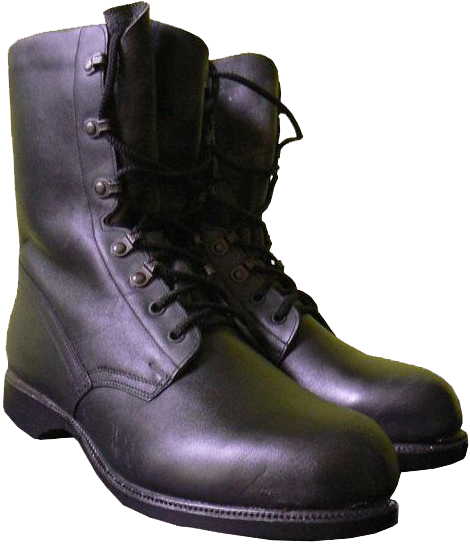 The lacing system consists of 2 pairs of simple round eyelets in the lower part of the lacing, then 2+3 speed lacing eyelets in the upper part of the lacing. The tongue is stitched to the top. The new design of the boots includes both new elements like padded "collar" on the top, and outdated features such as warm but heavyweight beaver lamb insulation inside the boots. 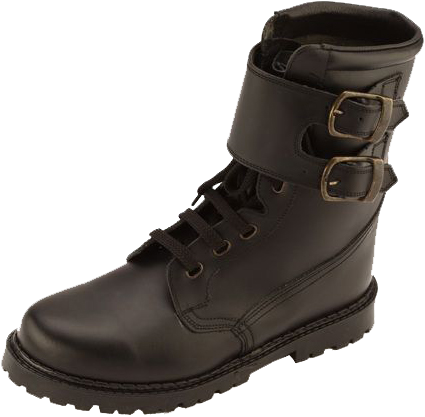 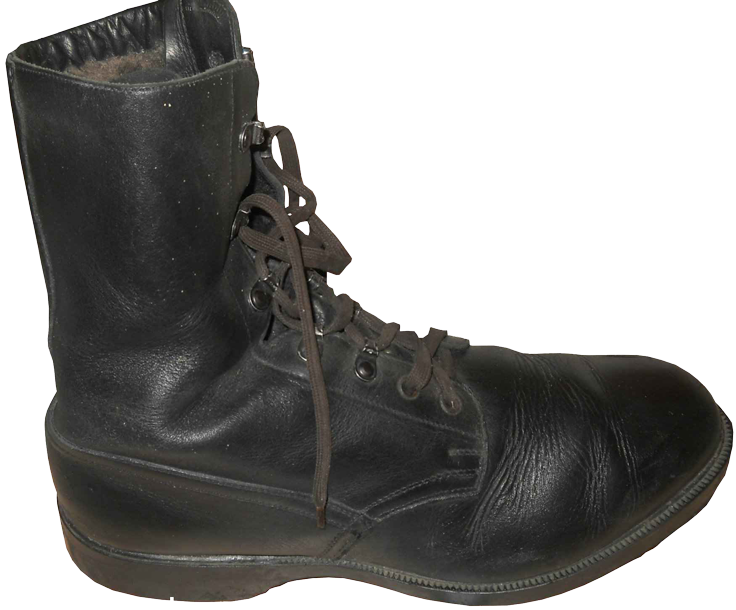 Since the beginning of the new millennium, the Hungarian Armed Forces are trying to keep up with global trends, one of which is the transition from full-leather boots to the composite materials (Cordura-type textiles and leather) footwear. 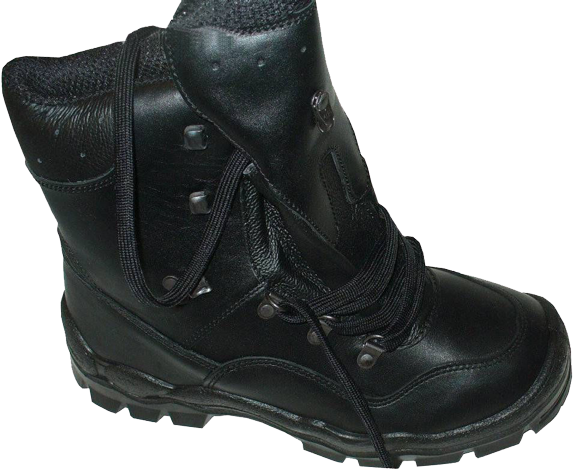 which has developed Hungarian M10 model boots of the year 2010. The design of these boots clearly shows some influence of "HAIX" and other companies, which have developed military footwear for the German Bundeswehr, namely "Modell 2000" and "Modell 2005/2007" boots. Judging by the bar code on the shown box, the shown pair of boots was made by order on one of the factories of China. Ordering military apparel, footwear and equipment on the manufacturing sites in the South-East Asia is also one of the main trends for the armies of the countries, limited in their military budgets.