Since the end of World War I and actually until the end of hostilities in Algeria the French troops used the footwear of different models, both low ankle boots and high-laced boots.

Low ankle boots were cheaper in production than the high-laced boots, and used to be worn at first with the puttees, and later on - with canvas leggings. The French officers wore low boots with knee-high leather leggings, from a distance such boots with leggings looked like high "cavalry" boots. 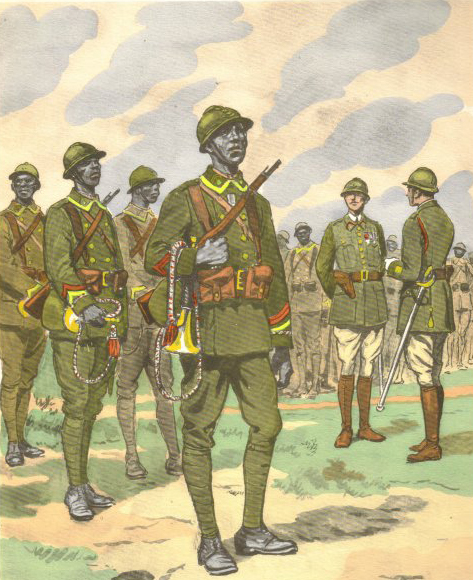 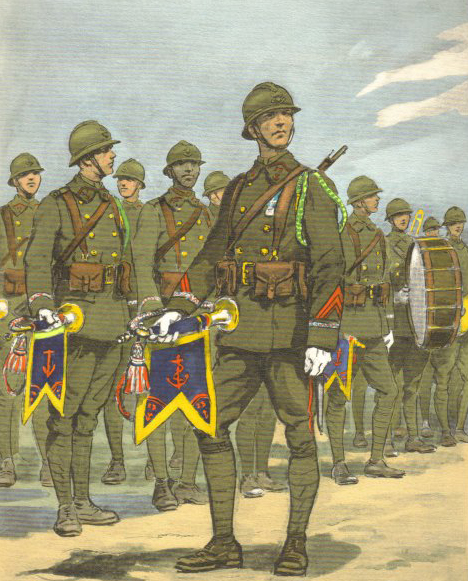 The flap of the boot's tongue was "closed" (stitched high to the boot's top), and provided only a minimal level of the feet protection from water, dust and small pebbles in comparison with "Knobelbecher"-type high boots of the German Kaiser's army, the contemporary enemy of the France. The French "officer's' boots differed from the "soldier's" boots by higher quality materials and accuracy of hand-made production. 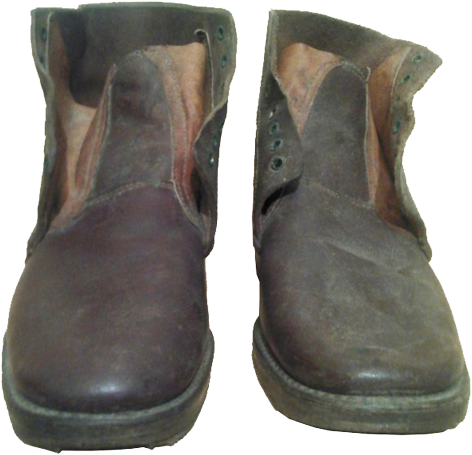 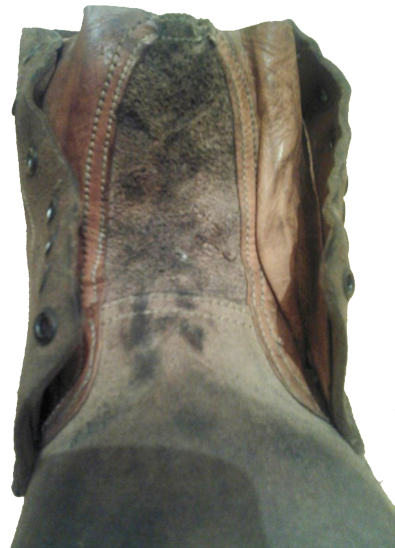 Low ankle boots of the French Armed Forces varied insignificantly by design of the boot's top; later models were more similar to the modern boots. In the early models the out-soles were made of thick leather and resoled with boot nails and metal tips on the heels and toes. Later models feature hard vulcanized rubber tread out-soles. Quite often one can see the boots of earlier models after repair (replacement of worn leather out-soles with the rubber tread pattern). 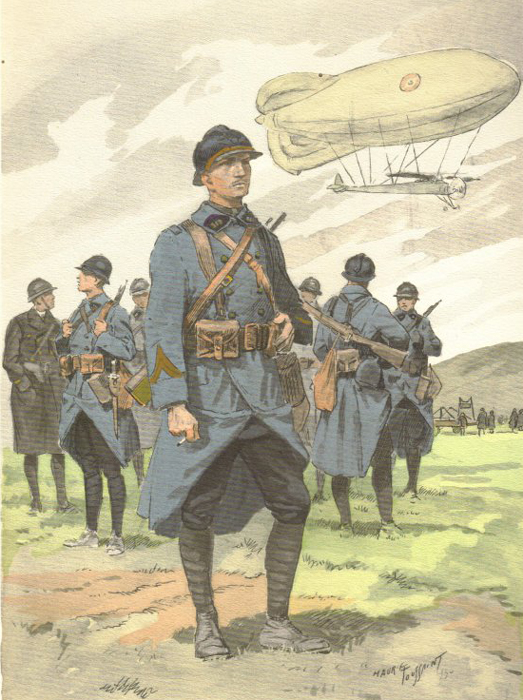 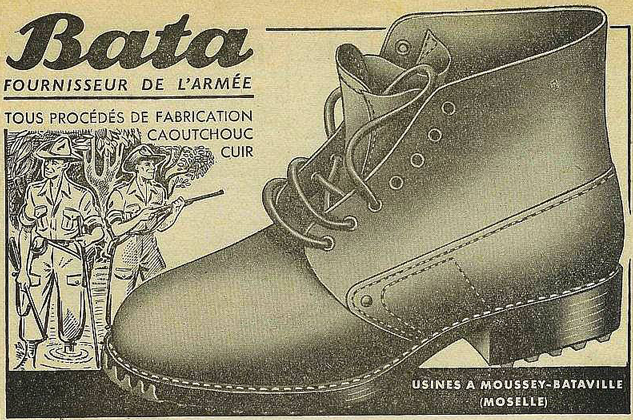 The French boots of model 1917 (Brodequins Mle 17) differ by the characteristic form of their design (side reinforcement stitching), with the added rivets on the sides. The lacing system consists of seven pairs of round eyelets. In the following decades these boots were produced in two colours: brown and black (Fig. 7-8). Thus, in the pictures shown the black boots were manufactured, according to the marking, by SYLVESTRE-VINCENT from LIMOGES in February 1940, and the brown boots were made in 1953. 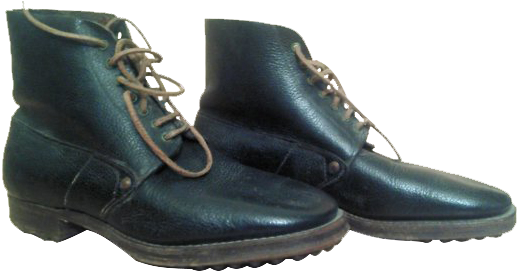 In general before World War II all the combat boots featured thick leather sole, padded with nails and metal tips on the toes and the heels (Fig. 9-11). The rubber resin (caoutchouc), due to its relatively high cost and rapid wearing out, was not widely used in those years for the mass production of soldiers' boots, excluding the specialized purposes footwear, such as the boot for paratroopers or tank crews. 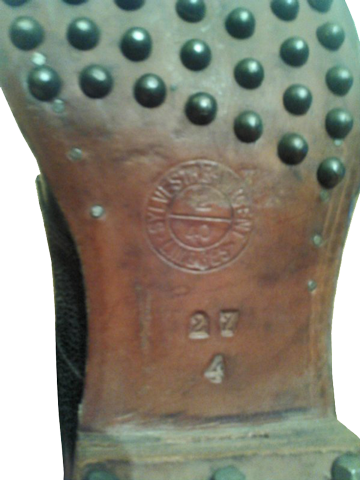 Since the leather of the boot's top was quite thick and strong, a typical was the situation when the soles were worn out, but the boot's top was in good condition. In 1940 and later the worn leather soles used to be replaced with the rubber out-soles, which came in two separate tips (the heel and the out-sole itself).

The following pictures (Fig. 12, 13) show the boot model 1917 with the stamped year of production 1954. Even in the 1950s, the earliest models of boots used to be produced by their original technologies. 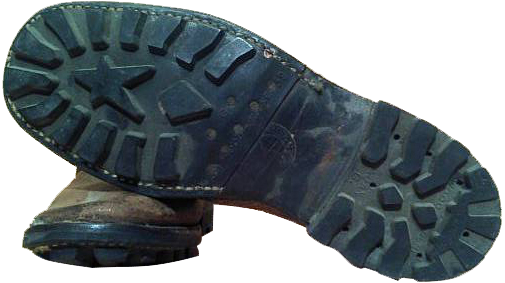 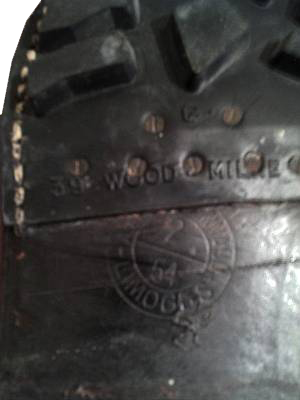 The boots model 1919 (Brodequins Mle 19) differ from model of the year 1917 with the design of the boot's top. They featured no leather "patches" on the counter and the sides, but on the rear side of the boots there were stitched narrow vertical leather strips, the lacing system consisted of ten pairs of round eyelets. The photo below shows the boots model 1917 with whole hard vulcanized rubber out-soles with dotted tread pattern (imitation of nail-padding) and manufacturer's marking on the out-soles (Fig. 14-16). The out-soles are stitched and glued to the boot's top, and reinforced by additional padding with boot nails. 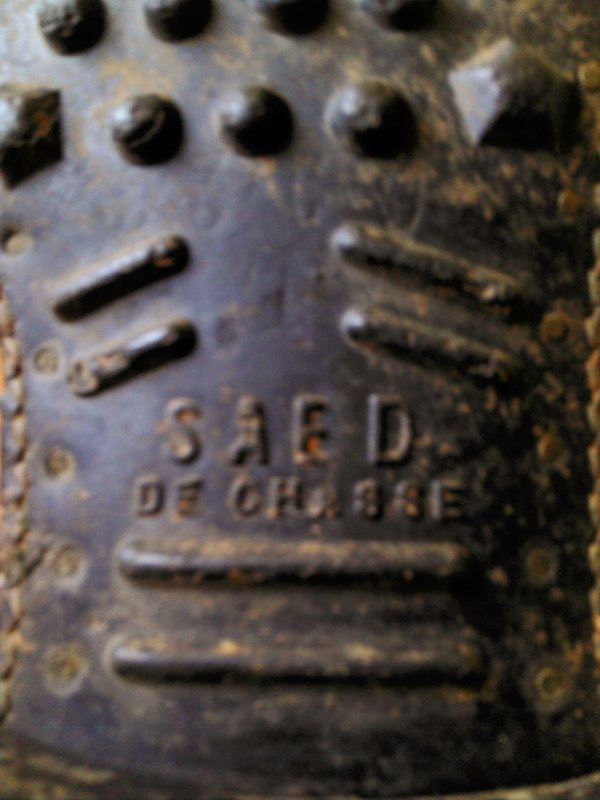 The design of the boot's top of the French model 1941 (Brodequins Mle 41) was changed again. The lacing system consists of seven pairs of eyelets, the reinforcement rivets were added again, the counter features additional padding (Fig. 17, 18). The leather out-soles are thick, padded with nails and metal tips on the toes and the heels. 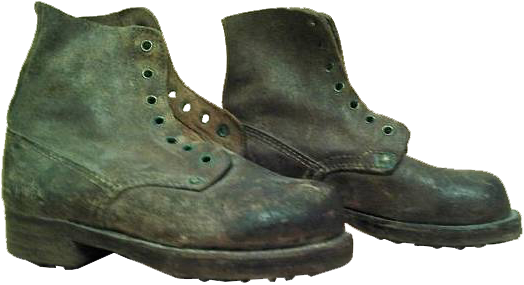 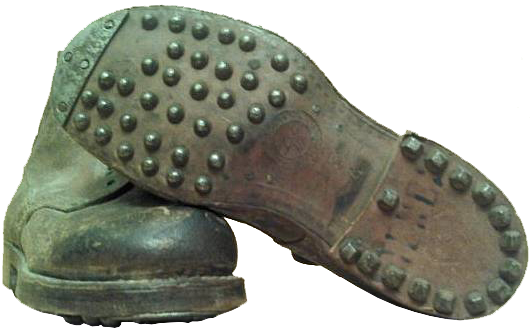 French military boots model 1945 (Brodequins Mle 45) by their design closely resemble the current models of the army boots. These boots served as the basis for creating the boots Mle 45 (model of the year 1952). The outer leather lining on the counter reaches the top of the boot's rear side, the lacing system consists of seven or eight pairs of round eyelets, and steel rivets on the sides of the lacing system was the same as in the boots model 1941 (Fig. 19, 20). 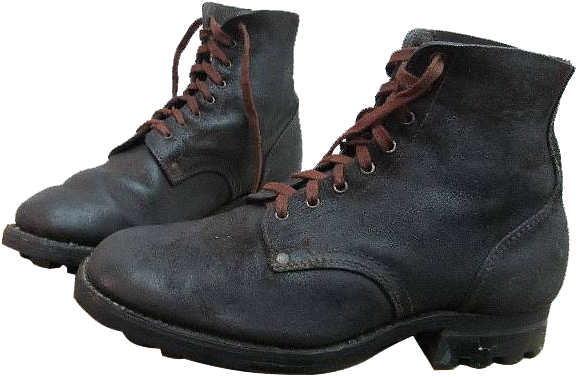 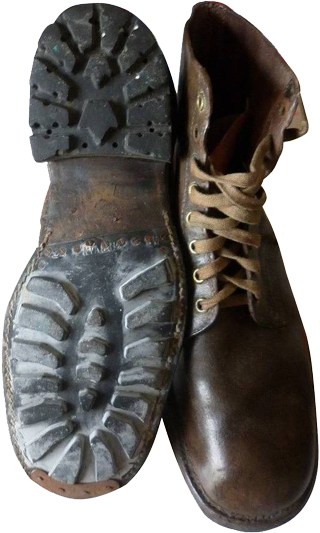 The boots model 1945 designed specially for the National French Navy (Brodequins Mle 45 Marine Nationale) featured smooth leather out-soles without tamping nails (i.e. without nail heads protruding out of the soles), and only the heels were tapped with small nails. The lacing system consisted of nine pairs of round eyelets. 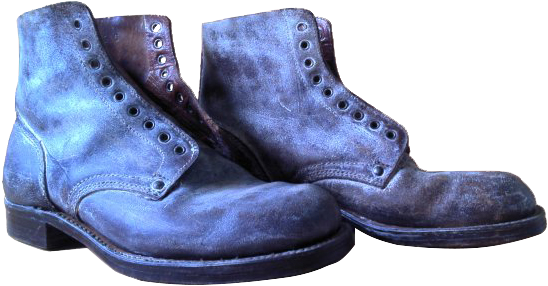 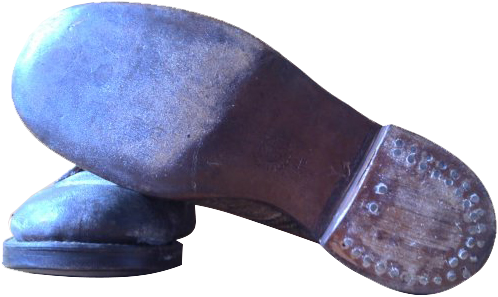 Fig. 23-25 - On the out-sole one can see the marking of the manufacturer and the date of production - fourth quarter of the year 1951 (4/51 in a circle), and the "sea anchor" stamping on the sole near the heel. 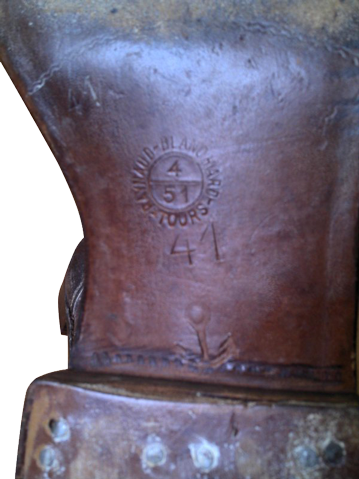 The servicemen of the French troops who fought on the Allied side in the World War II used both domestic and foreign-made boots. In addition to the extensive use of army boots models 1917, 1919 and 1941, different foreign boots were also wide-spread, for example, British "Ankle boots" of black grained leather with reinforced toe and heels, featuring seven pairs of round eyelets for textile laces. The out-soles of these boots were made of very thick leather (about 2.5 inches), padded with 13-15 large boot nails and four nails with metal tips on the heels. Each size boots had three variants of width. It was a very strong and reliable boots, capable to withstand extremely harsh conditions of the North African desert.

After the Allied landings on November 8, 1942 in North Africa, the French Marines were equipped with the American boots model US17, reddish-brown, made of smooth calf leather. Their main difference from the British boot, except small details (such as the number lacing eyelets or peculiarities of stitching) consisted of a layered structure of the out-soles, and the addition of synthetic rubber tread. The out-soles were attached to the top of the boots by the "Goodyear" welt construction method, and the out-soles were additionally padded with small brass studs with flat heads. These boots were used in Italy in the years 1943 and 1944, usually with army model M30 khaki-coloured canvas gaiters. 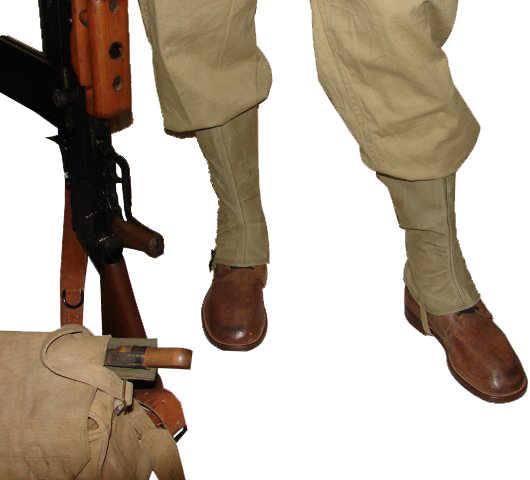 In general after the year 1942 the French paratroopers, as well as their British colleagues, already wore American paratrooper's boots.

The French paratrooper boots model 1950 (Bottes de saut Mle 50), as the name implies, were used by paratroopers, and they are fundamentally different from the boot model Mle 52 by the design of the top: they had no straps with buckles but featured shallow and low lacing (to select the most appropriate lacing scheme that made it possible to fit the boot's width comfortably), as in the modern Italian paratroopers boots Scarpe militari: "Anfibi" da para. 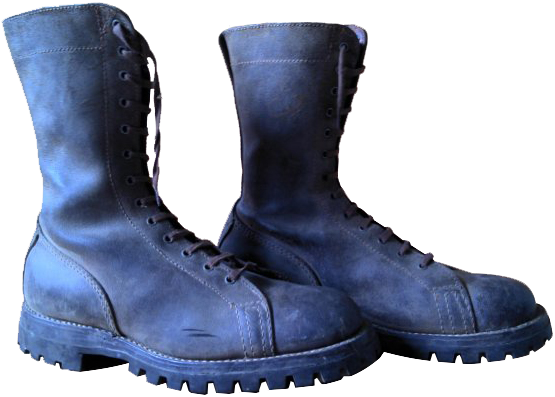 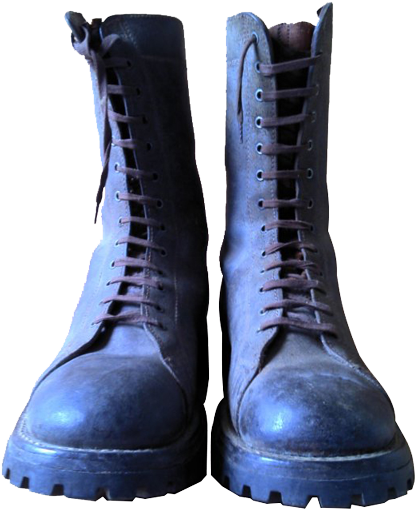 At this the design of the counter of the French Mle 50 boot is exactly the same as on the Mle 52 boots, with two layers lining of the stitched leather. The lacing system consists of thirteen pairs of round eyelets (the modern Italian paratrooper's boots (Scarpe militari: "Anfibi" da para), for comparison, featured 14 pairs of eyelets). The out-sole tread patterns can be very different - from the out-soles with dotted tread pattern (imitation of nail-padding) to the standard tread pattern, as in the conventional army boots of France (Fig. 27-28). 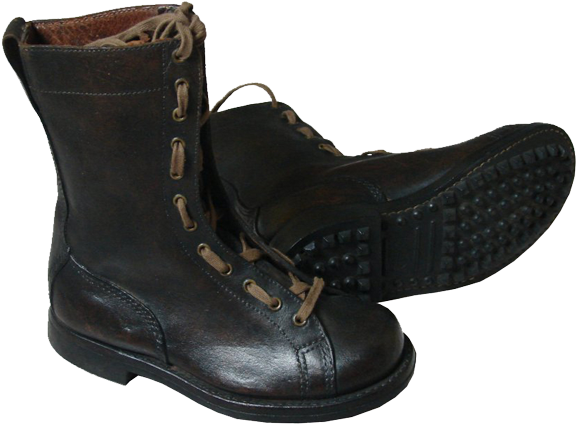 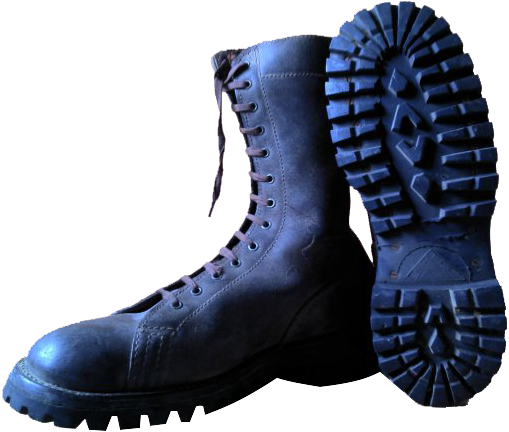 The French parachute boots (Bottes de saut Mle 50) of model 1950, as well as the rare original US model M43 boots from old stock, have been issued to the paratroopers involved in the war in Indochina, as evidenced by the witnesses at the French thematic forums (Fig. 29-30).