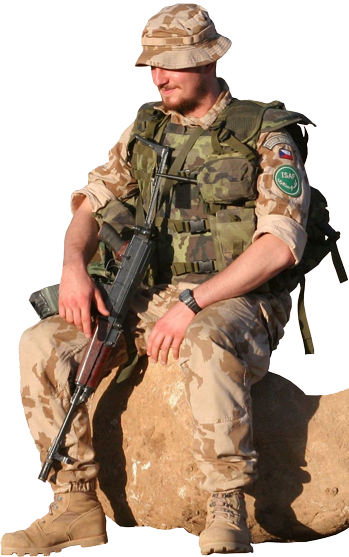 "Prabos" ("Prabos plus a.s.") company with manufacturing facilities in Slavičin town is the main supplier of footwear for hot and dry climate for the Armed Forces of the Czech Republic (abbreviation - "AČR"). Such boots were modelled by the famous American "desert" boots, with composite boot's top, made of leather and Cordura (Nylon). However, unlike the American single-coloured prototypes, the Czech "desert" boots are non-uniform in colour: the suede upper part is light brown and nylon parts are "coffee"-coloured. As distinct from the American "desert" boots, with their Direct-Molded Sole (DMS) construction, the Czech "desert" boots are stitched and glued, and the vulcanized rubber protector glued as well.

The boot's toe, counter and lacing system are made of suede with hydrophobic impregnation. The slant side strips, which are intended to protect the malleolus bones and reinforce the overall boots construction, are also made of suede, just in the same way as in the earliest models of American "desert" boots of the year 1990. The boot's counter and toe feature padding inserts. 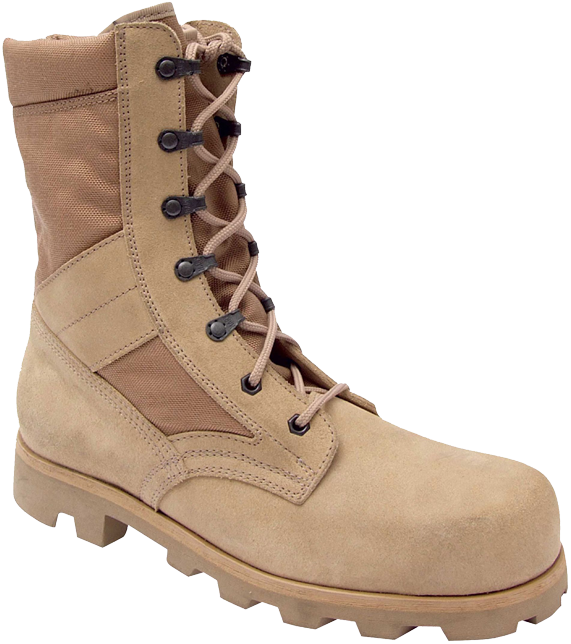 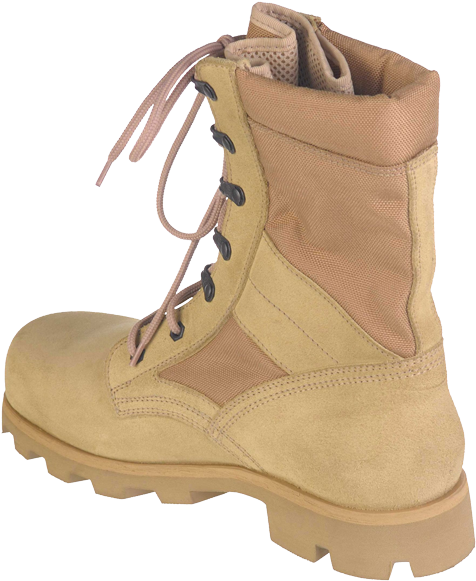 The boot's lining is made of TEBOX® (thermo-regulation and perspiration-disposal textile), the soft cushioning "collar" on the top of the boots and other non-leather elements of the top are made of nylon (CORDURA®). The insoles are made by DRYSOLE® technology.

The boot's tongue is stitched high to the boot's top, the marking and manufacturer's instructions are indicated on a label inside the boot. 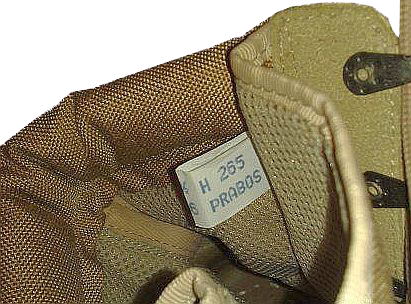 Similarly to the other "desert" boots, the Czech ones feature no ventilation and drainage holes on the lower inner sides of the boots: such holes make no sense in the arid desert conditions, unlike in the wet jungles.

The Czech boots are lightweight enough compared with the other army boots: a single boot weights just 850 grams.

The lacing system consists of five pairs of "MARK" speed-lacing eyelets in the upper part and two pairs of simple round eyelets in the lower part of the lacing. Such composition proved to be more efficient and convenient in comparison with the system of full speed-lacing eyelets: massive cylindrical-shaped eyelets on the instep only hinder, but does not really accelerate the speed of lacing. 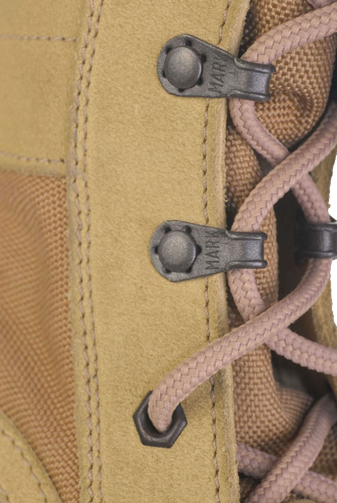 The out-soles of the Czech "desert" boots feature "Desert" type tread pattern, which is a copy of the US "Panama sole", and made of solid sand-coloured vulcanized rubber, non-slip and spike-protective (steel plates in the soles protect against punctures from below). 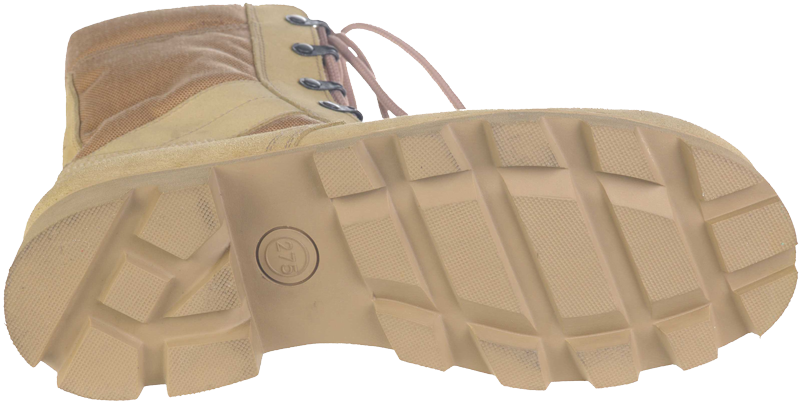 The Czech "jungle" boots with camouflage pattern top (boty vz95) are provided to the Armed Forces of the Czech Republic since the mid-1990s. 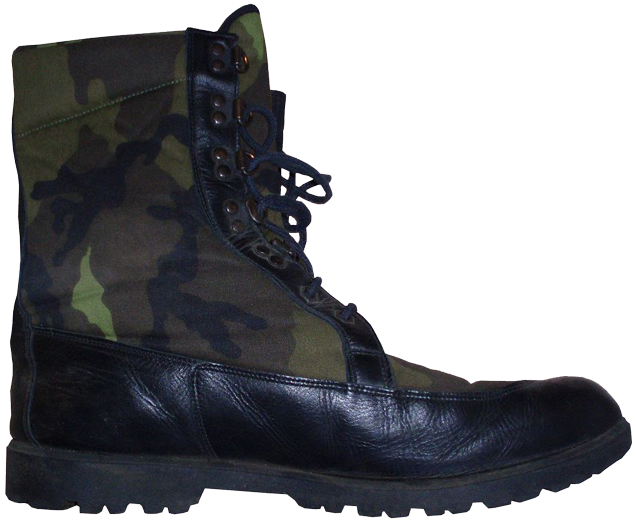 The boot's top is composite and is made of: 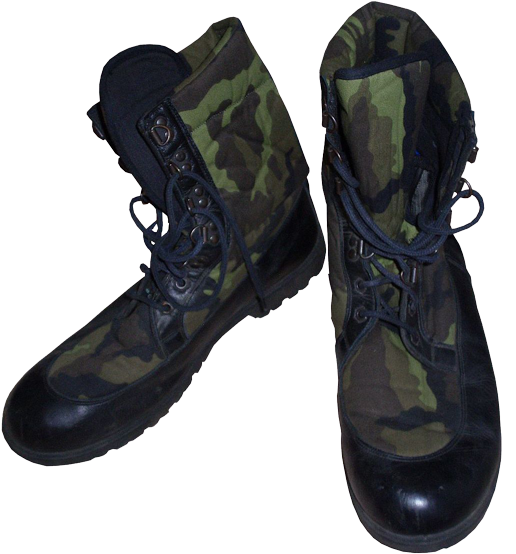 The out-sole is made of black solid vulcanized rubber with tread pattern of standard classic "Vibram". 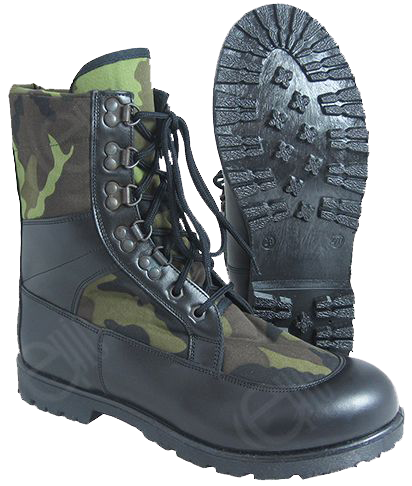 The early models of these boots were made without reinforcing slant side strips of leather on the sides, and the lower part of the boots top are made of leather in a way that resemble conventional leather over-boots. Thus, the feet are less exposed to the overheating by the sun and the air exchange is easier, but this resulted in reducing of the construction robustness. The Austrian military footwear designers solved this problem by adding an auxiliary leather jumper between the toe and the lacing system.

The later versions of these boots already featured reinforcing slant side strips of leather on the sides. The rear sides of the boots from the top to move the boot's counter were made of leather as well. 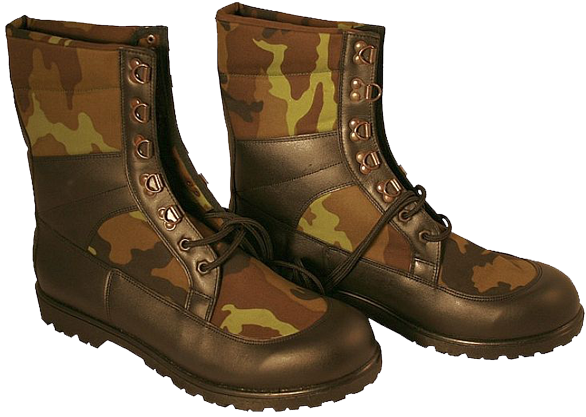 The lacing system consists of two pairs of simple round eyelets in the lower part of the lacing and five pairs of D-shaped lacing rings above. The laces themselves are of circular cross section.

The Czech copies of black American "jungle" boots by "Prabos" company are very close to the original prototypes, and they range in size from 36 to 51. The top is made of smooth black cowhide with water-repellent and anti-microbial impregnation, and CORDURA® nylon. The insoles of these boots are made by DRYSOLE® technology, and are just the same as in the Czech "desert" boots. 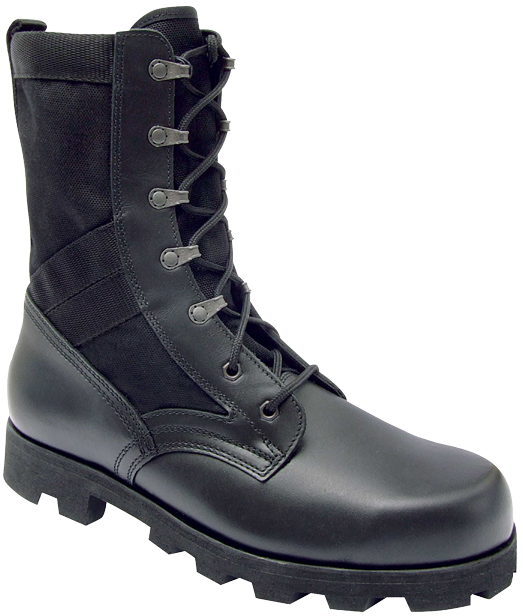 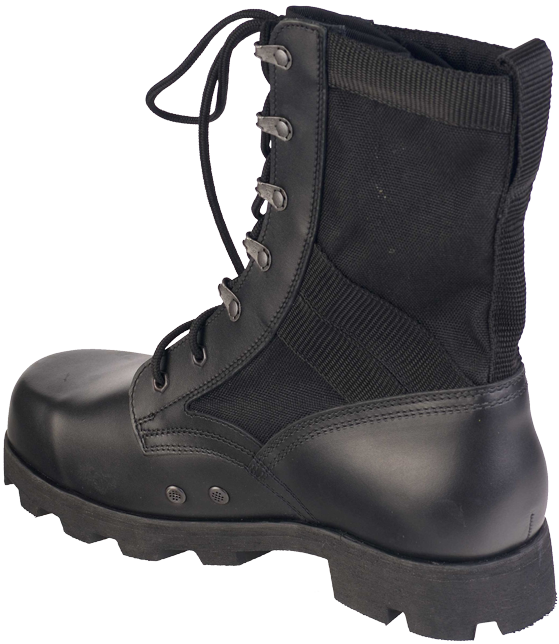 Just similarly to the American black "jungle" boots, which were introduced to replace the green "jungle's" in the middle of the 1990s, the Czech boots are equipped with twin eyelets for ventilation and water drainage on the lower inner sides. 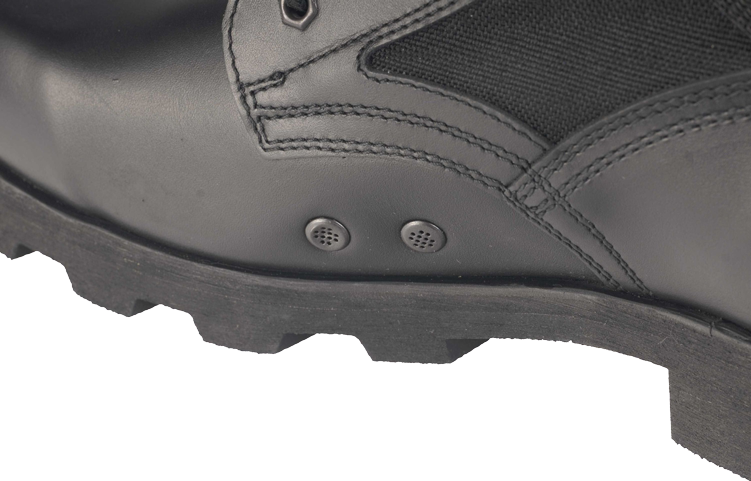 The non-slip out-sole with self-cleaning "JUNGLE"-type tread patterns are the full copy of the US "Panama" tread pattern.

These boots provide protection against puncture ("Spike protection") thanks to the steel plates in the soles. The amortization of the counter and toe are also provided.

The "Pilot"-type boots, manufactured by "Prabos", can also be attributed to the category of hot climate footwear, since they are made of leather and CORDURA® nylon as well. 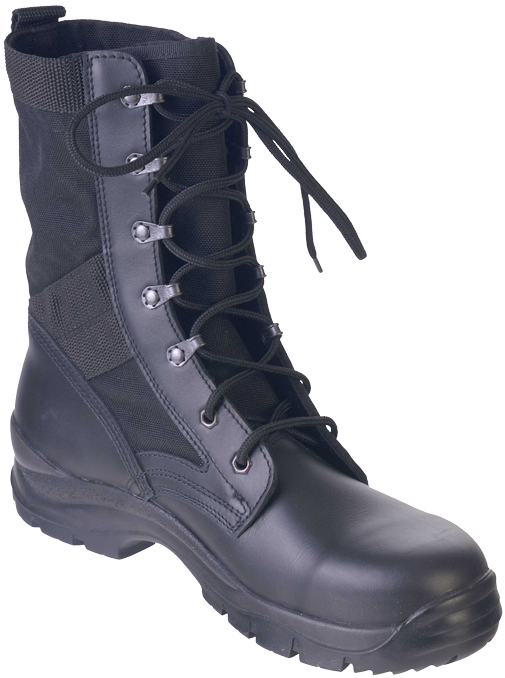 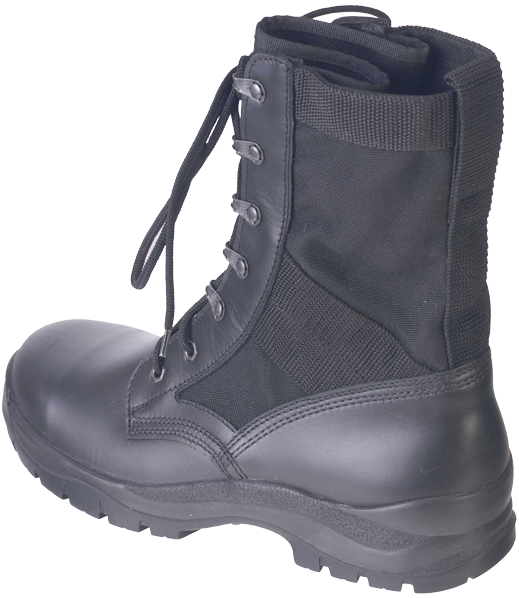 By their outlook appearance these boots are just copy of the American USMC boots of the 1990s, fully reproducing their appearance in details, with the exception of the out-sole tread pattern. The original "Bates" boots, which apparently were an example for creation of Czech "Pilot" boots, were designed for US Marines and special forces units like US Navy "SEALs" (Navy's Sea, Air, Land Teams). 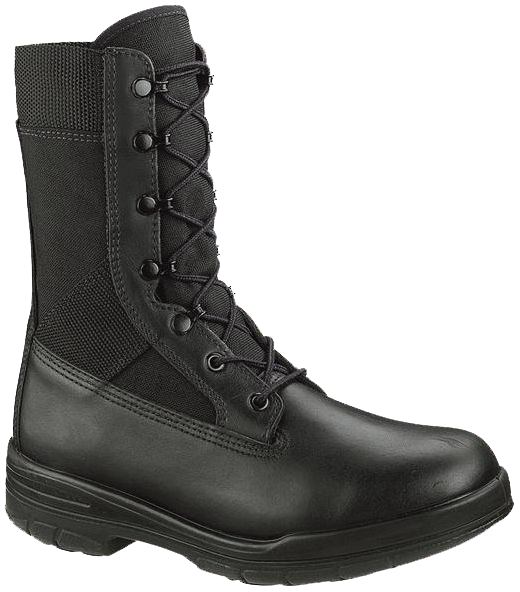 The original American boots, certified by US DoD, however, feature more technologically "advanced" and, subsequently, more expensive materials, such as "Dura-Schock®" out-soles. However, the Czech military "Pilot" boots also quite good and decent.

The "CROSS"-type non-slip out-soles are made of composite polyurethane/rubber out-soles, glued to the boot's top (the American "Bates" use Direct Molded Soles, DMS), the tread pattern is of Czech design. 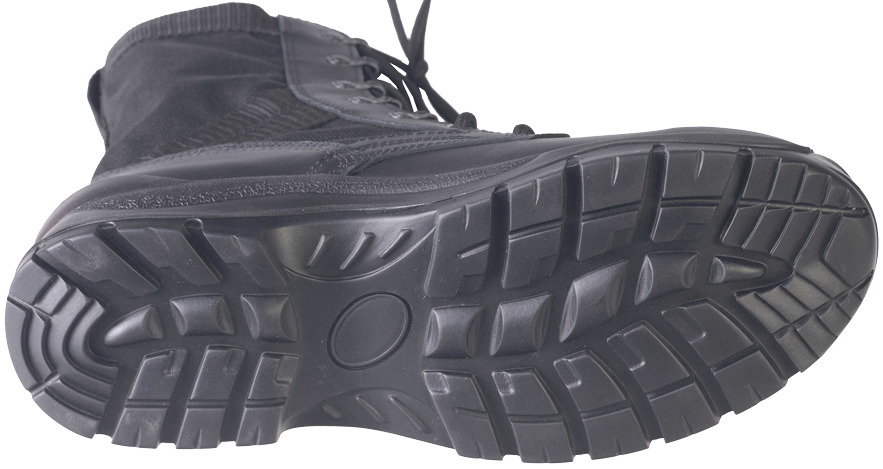 The cost of these boots in the Czech Republic is about 80 Euros.