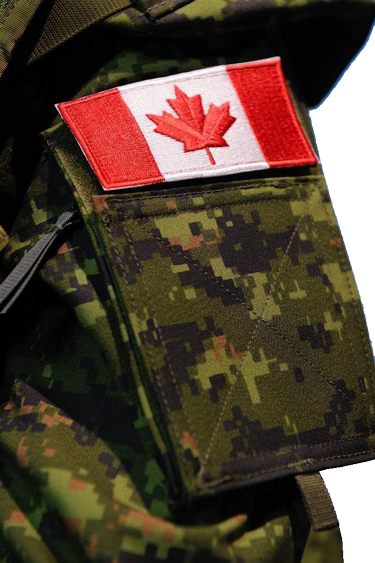 The Woodland version of the Canadian Disruptive Pattern Digital Camouflage (CADPAT), which is based on the Pixelization of Black, Brown, Light Green and Dark Green colors was primarily designed for Temperate and Tropical Environments.

CADPAT is a computer-generated pattern, in which clear boundaries between distinct colors are virtually eliminated by using small pixels, creating the so-called "Dithering Effect" and incorporating Low-Contrast Near Infrared Protection designed to deceive Detection and Night-Vision devices.

The Danes say that the Canadian digital CADPAT is almost the same colours as the Danish M/84 (the Canadians "borrowed" the camouflage pattern colors from the Danish Army, which had done extensive scientific measurements of the colors in typical Danish nature), but there is a slight part of brown in the Canadian pattern however. 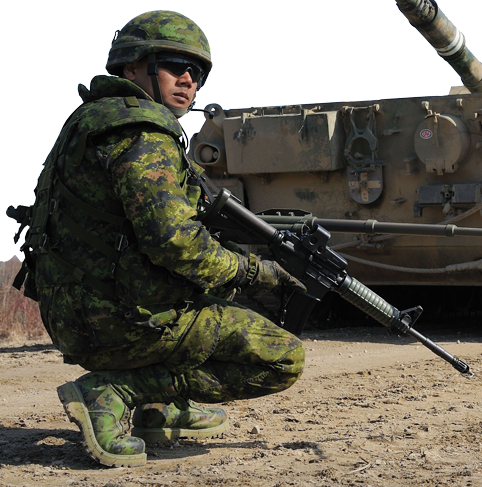 Different variations of CADPAT are widely used in many Military Forces all over the world (UCP, MARPAT® etc). The Canadian TW Camouflage Pattern is currently in use by all the branches of the Canadian Armed Forces.

Since 2002 the Canadian soldiers have been dressed in the CADPAT (Canadian Disruptive Pattern camouflage) uniform developed circa 1996 and also known as No.5 Operational Dress, available in 2 variants:

- Arid Regions (AR) CADPAT, which is composed of 3 different shades of brown color.

As distinct from the very progressive and ultra-modern TW CADPAT camouflage, the combat jackets and pants, which were issued to the Canadian soldiers, were exactly of the same design as the standard "OG Combat Uniform" that had been adopted back in the year 1963 for all the branches of the Canadian Forces! 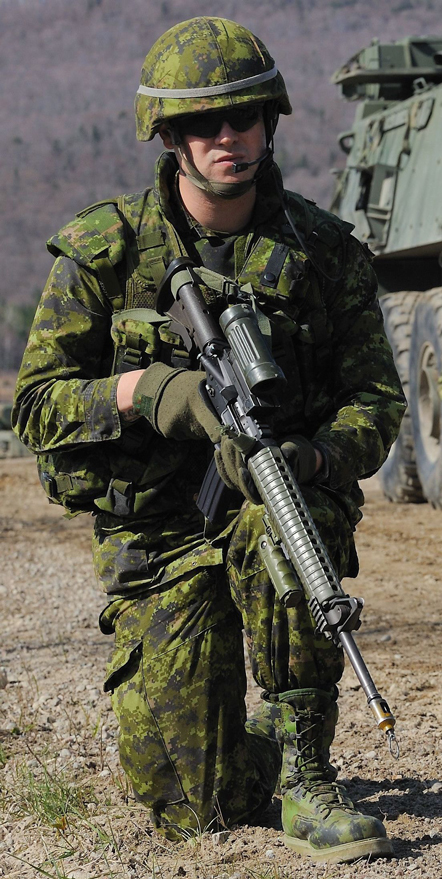 So after the year 2002 all the new field clothing (including brimmed combat hat, desert scarf, helmet and rucksack covers, fragmentation protective and tactical vest, etc.) and equipment became available in CADPAT.

Even after the Canadian involvement into the Allied operations in Afghanistan the Combat Uniform design has remained basically the same as in 1960s, though with some minor modifications like covering pockets buttons to prevent snagging on equipment.

Ironically, the time to update the uniform design came only after Canadian forces were going to left Afghanistan, having arrived there with only the TW version of CADPAT at first.

The transition to the Improved Combat Uniform (ICU, French UNIFORME DE COMBAT AMÉLIORÉ (UCA)) in the beginning in 2012 became the next redesign of the Canadian Combat Uniform since the 1960s. Actually it was not the introduction of a new type uniform but rather an improvement of the existing one based on operational feedback, that resulted in 17 modifications that made the Canadian uniform more close to the US Army Combat uniform (ACU).

In some sources this set is also called Canadian Enhanced Combat Uniform (ECU). This combat uniform should remain the standard field uniform of the Canadian Forces into the 21st Century.

Ironically, the updated Canadian uniform to great extent has become more ACU-like even as US Soldiers complain of the ACUs features. This caused many jokes among the Canadian military personnel. It is also worth mentioning, that the Canadian Forces Operational Clothing Team clearly stated that the national uniform would remain in CADPAT but not MultiCam, as distinct from other members of "Just-us" league like USA, UK and Australia, so Canada will be the only one not using it. The transition of the Canadian Forces to a new brown combat boot is also planned.

One could say that the CF make the improvements towards ACU by ignoring the dislike of US soldiers. The most serious complains with the ACU were the Velcro & zipper front closure and Velcro closures of the pockets, both flat ones on the chest and sleeve cargo pockets. But the modifications integrated into the Canadians ICU have become essentially modern military standard. Mutual borrowing of the neighbor's solutions is typical for US-Canadian relations: at first the US copied the Canadian camouflage design to make UCP, MARPAT etc., and then the Canadians copied the US ACU design. 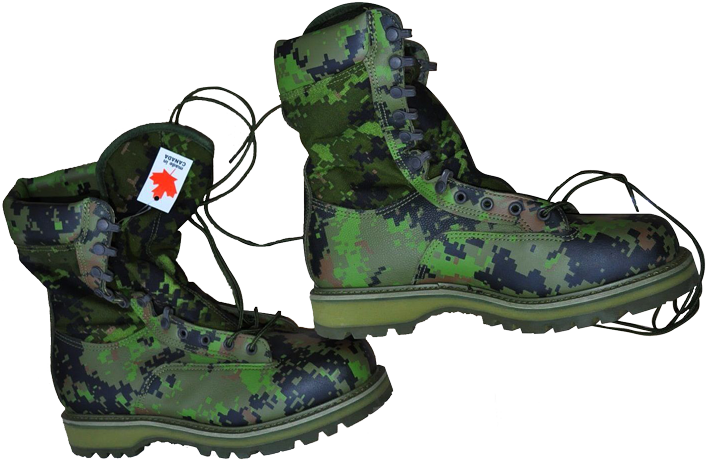 These boots have become a part of the Improved Environmental Clothing System (IECS) for the individual soldier. Similarly to US Army Gen III ECWCS Extreme Cold Weather Seven Layer Clothing System and the other International Clothing System, the IECS is based on the principle of layering, allowing the soldier to regulate body temperature through adding or removing layers. So the IECS represents by itself a fully integrated clothing system to protect the Canadian Forces (CF) soldier in conditions ranging from wet cold to extreme cold.

What about the footwear, the IECS System is a complete set that includes the following elements: 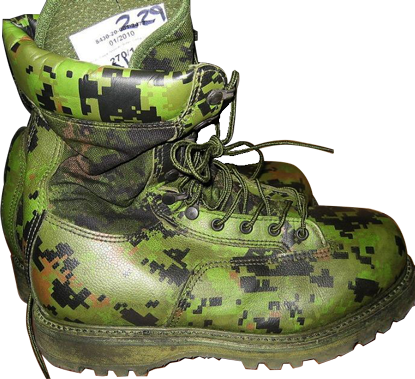 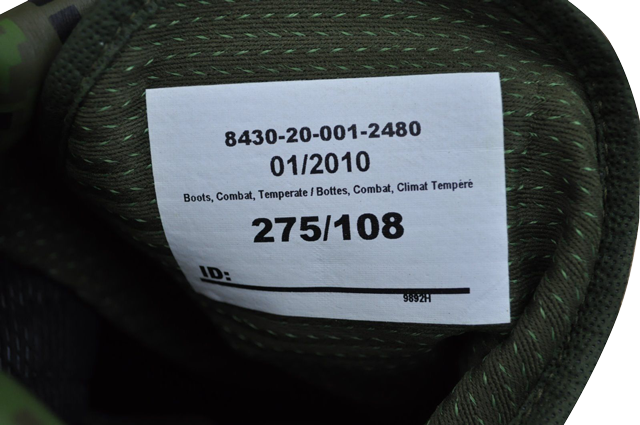 The Canadian CADPAT -TW (Temperate Woodland) Camouflage combat boots are basically the same in construction and features as the Canadian regular black boots for temperate climate, but with the camouflage- painted surface, both pebbled leather and textile fabrics (Gore-TEX). These CADPAT camouflage boots look very bright, with vivid colors. 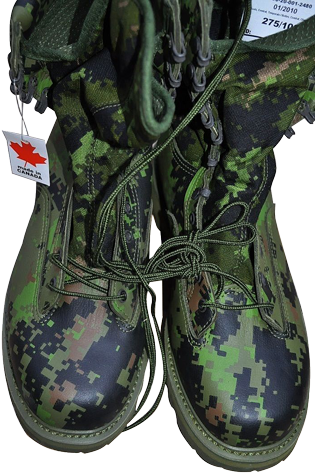 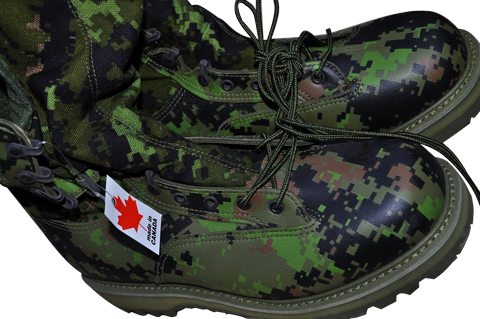 Bright-green-colored laces are made of 100% nylon and are very similar in outlook appearance to the laces of the US Armed Forces. The outer surface of the boot's tongue is camouflage-colored, as well the other fabric parts of boot's top. 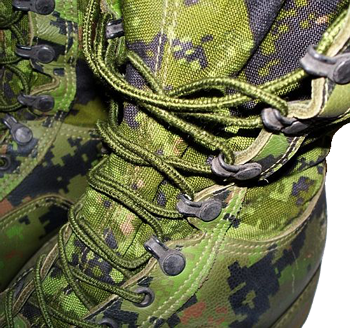 Black PU-insoles are anatomically-formed and feature green fabric cloth surface. The insoles can be changed to more thick and warm ones in case of need. All the insoles are marked with military identification tags and size identification. These soft, cushioned inserts provide arch support and can usually be removed and replaced. 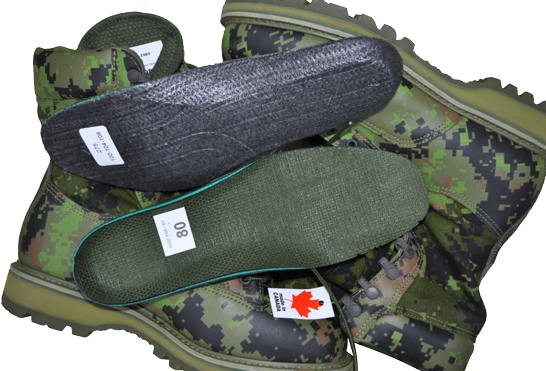 The mid-sole is made of cushioned polyurethane, a layer of shock-absorbing material that helps dampen impacts on rugged terrain. 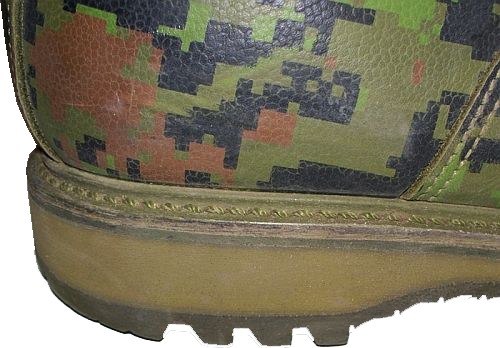 The 100% rubber out-sole is the Vibram® "Sierra®" tread pattern design for enhanced traction. In result this lightweight sole offers cushioning and flexibility, shock absorption and good durability. The shank, a stiff piece of material is inserted between the mid-sole and out-sole to provide torsional stability, while Vibram® out-soles provide good traction and durability on diverse and rugged terrains. 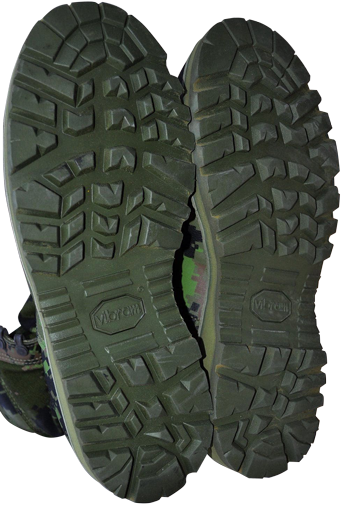 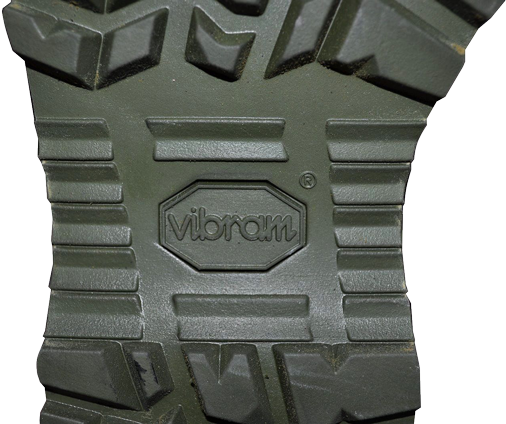 The CADPAT-painted soft padded collars in the upper part of these high-cut boots cover above the ankles and provides superior support on rough, uneven terrains along with stability when one is carrying a heavy back-pack. Also the collar provides extra comfort of wear and helps to keep moisture, mud, dust, sand, debris, and other foreign substances out. 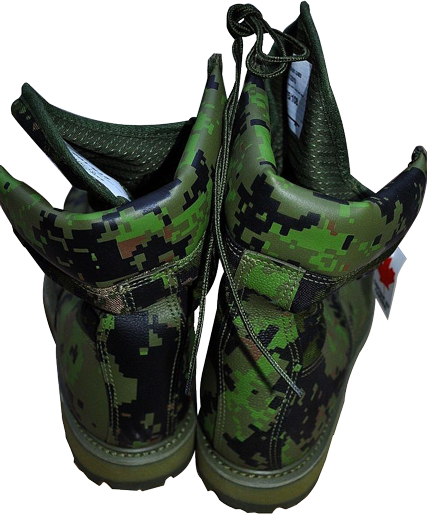 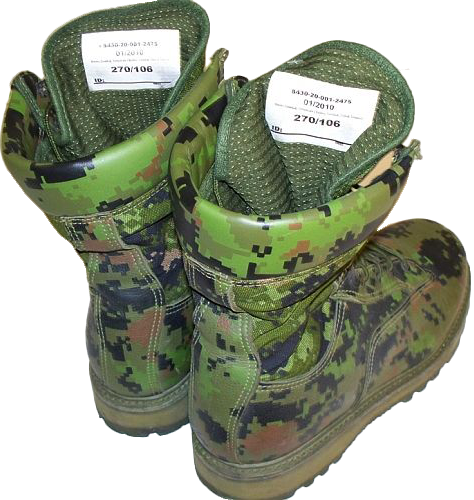 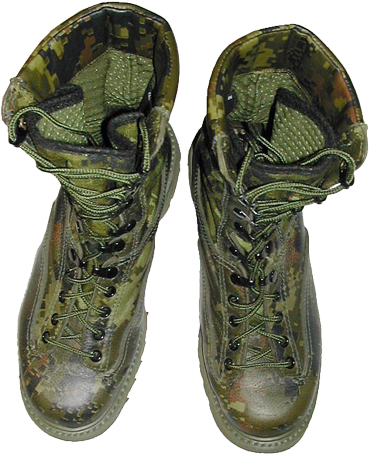 The Canadian CADPAT uniform pants feature inner pant legs (so-called "sand trap"), which are to be tucked inside the boot, once it is in one should lace up the boots and tie them off.

The next step is to place the outer pant legs over the top of the boots and to fix them with Velcro closures and elastic cord & lock for pant hems, so it should look neat and smart, not wrinkled or uneven. 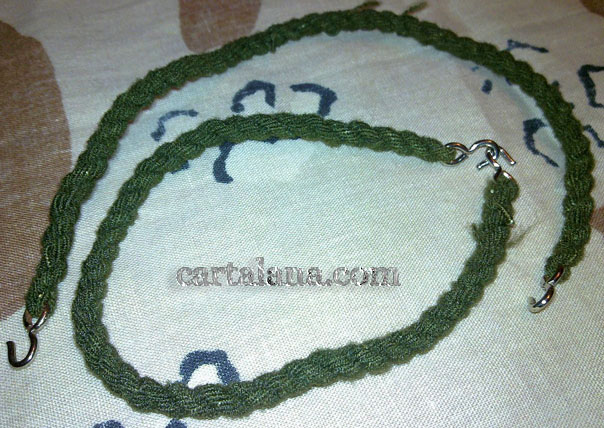 In the previous years it were green-colored twist elastic boots bands with metal hook closure, which were used for the same purpose. The ability of these bands to just disappear caused many jokes and the necessity to have several spare samples in the pocket. The bottom of the pant legs (the cuffs) used to be tucked under the boot bands, not inside the boots. 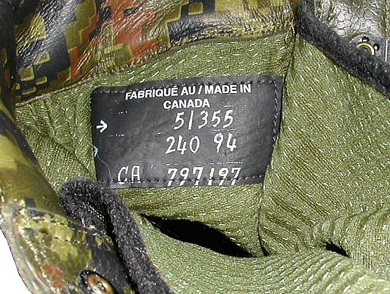 The inner layer of the boots is Cambrelle®-lining, and bear the labels with such information as size and widths, country of manufacture (Canada) in English and French, and the military ID numbers.

The pebbled leather is treated with silicone on the factory, so it is not recommended to apply to them any shoe polish containing natural bee-wax or silicone. Only special silicone-based shoe-cream, provided with these boots, is to be applied to preserve the colors and features of these footwear. 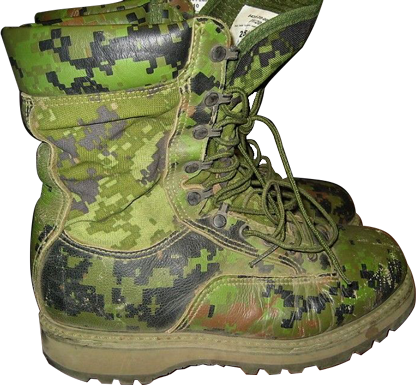 Actually such special cream is often not available to the soldiers wearing CADPAT boots, so the camouflage paint on the boots tends to tear and wear out just for couple weeks of field use, especially in the toe area. Due to the pixellized nature of the CADPAT camouflage, it is really impossible to recover fully the original colors of the pixels, as distinct from all-black leather boots, which can be easily refreshed with shoe polish very quickly and anywhere. So the scratched CADPAT boots look much less impressive. This simple truth came out after 6 years of field tests (2004-2010)!

In other words, one would need some multi-color boot polish equivalent to get them back in shape. With so many colors going on, there is no way to use polish to restore the leather of the boots that boots usually get scraped up in the field. That is unless there was a polish by the numbers kit. 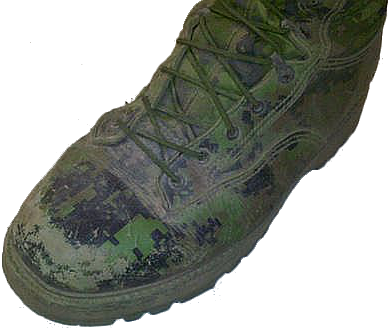 The Canadian web-forums have plenty of ironical comments, posted by the soldiers who had to test and wear these CADPAT boots, most of which criticize the idea and its implementation, for example: "CADPAT on boots makes you feel like you are wearing Walmart kids rain boots", "I like CADPAT, but not on boots. ", "I remember the CADPAT boots, that one was a real f***ing joke !!" etc...

However, many new ideas and concepts did face with resistance and misunderstanding in the past, but anyway managed to prove their usefulness.

There were also full-leather CADPAT variants of the CF boots, manufactured by "Terra" company, both in temperate-Woodland (TW) and Arid (AR) camouflage. 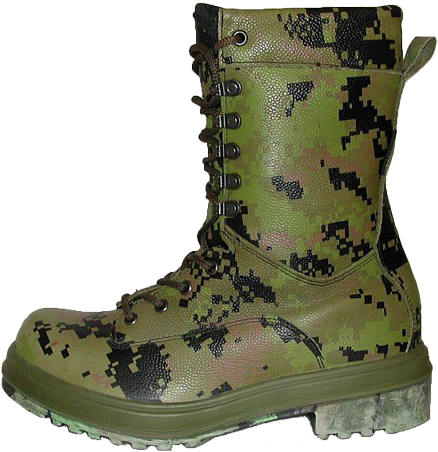 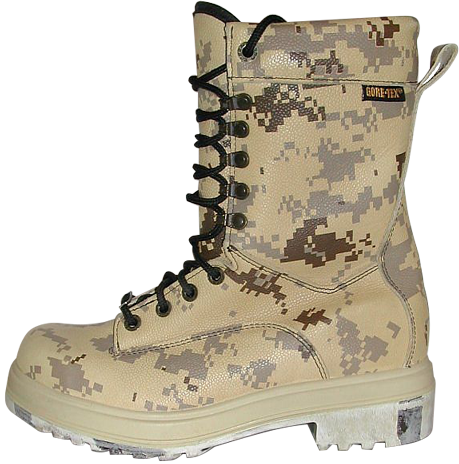 The out-sole tread pattern looks very similar to the one of conventional Canadian boots, the so-called "Black Pebbled Leather Combat Boots" (Mark I - Mark IV). This tread pattern was "borrowed" by the Canadians from the British military "High-Leg Combat Boots".

The care of these boots consists of brushing all dirt and debris off after each use, because layers of caked-on dirt and mud will make any footwear wear out faster. Nylon and mesh uppers can be washed with mild dish soap and warm water, because using harsh detergents can break down synthetic fabrics over time. If these boots got soaked, the best one can do is to fill the boots loosely with newspaper or paper towels and let them dry in a warm place, far from any sources of open heat or sun, because this can damage or weaken the boots.

The leather parts of the boots can be cleaned with a gentle leather cleaner, dried completely and then rubbed with special silicone-based leather conditioner to prevent the leather from drying out. The treated leather will naturally repel water and dirt. Periodically cleaning and re-treating the boots can significantly extend the life of footwear.